The Egyptian satirist Ali Salem was more than just a true friend to a number of Israelis — he was the apostle of a warm peace. 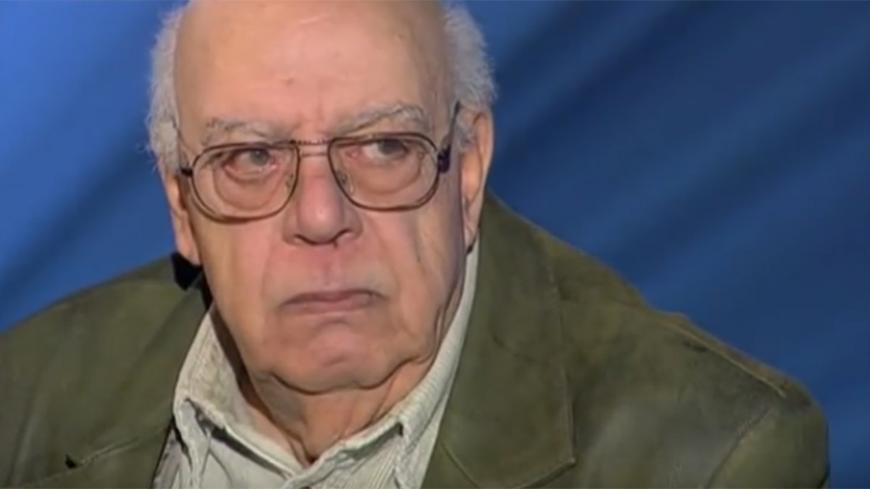 “He was the prophet of liberalism in a country that failed to respect its prophets.” That is how Thoth Wahba eulogized Ali Salem in the Egyptian daily Al-Dustour. The Egyptian satirist and columnist, who passed away at the age of 79, chose to leave this world on the eve of Yom Kippur, Sept. 22, a sacred day of fasting for Jews and the day on which Israel’s most terrible war with Egypt erupted. It is almost as if he were reminding us that on this date, God settled accounts with both Israel and Egypt. The first time was with the war they fought in 1973, and the second time was when God took his prophet of peace from their midst.

Every Egyptian knew of Salem. He was a theatrical character, charmingly clumsy, who lectured his audience with a booming voice and histrionic gestures, at least in those rare moments when he managed to put down his cigarette. Hundreds of Israelis knew him as well because of his visits to their country. The first one was in 1994, when he drove to Israel in his dilapidated old car. When he returned home, he used his unique voice to describe his experiences in "My Drive to Israel," based on notes from his travels across the length and breadth of the country and his encounters with its people. Over the next two decades, Salem would not stop reminding everyone that mostly good would come of Egypt’s relationship with Israel. Knowing that people weren’t yet ready for this message, he found a way to relate it wisely and with a special charm and charisma.

“The State of Israel is not our enemy,” Salem said in an interview with ONTV three days before he died. “I’m sure that this statement contradicts everything you believe,” he told his interviewer, “but just think about it for a minute. Let’s say that they are opposed to peace and even that they are evil. Still, they’re not stupid. Israel wouldn’t want to live right next to a fanatical neighbor, torn apart inside, and ruled by gangs of bullies and the Islamic State. A strong Egypt is in Israel’s interest.”

To the many people who knew Salem — in Egypt and in Israel — he really was a prophet, the apostle of a warm peace, which remains stubbornly hesitant. What he represented was the antithesis of the doctrine put forward by former President Hosni Mubarak that dominated Egyptian-Israeli relations in the post-Anwar Sadat era. The Mubarak doctrine dictated a policy that worked to empty the relationship between Israel and Egypt of any expressions of culture, of contacts between their peoples and, in fact, of any real spirit, leaving only the necessities for survival: a stable border, closer relations with the West and a say in Palestinian issues. Anything that failed to serve these particular objectives was stymied by violent public outcries with support from the top. Joint academic programs, scientific cooperation, journalistic contacts, tourism, the exchange of athletes and cultural collaboration were all forbidden by the government in Cairo. It fought against them when they did exist, so much so that oftentimes no trace was left once they were eliminated. All of this was intended to prevent Israeli culture from penetrating the heart of the Arab world and to sustain the image of Israel as the main source of problems in the region.

Successive Israeli governments did not recognize the trap that Mubarak had set out for them and praised him to the heavens for believing that peace was a strategic option. They failed to demand more than a few crumbs from his vision of peace. Salem and a handful of other Egyptian intellectuals broke through the ban and called for a relationship based on genuine camaraderie with the enemy next door. He was thrown out of the Writers’ Union for it, publicly castigated and faced threats to his life serious enough that he was forced to hire a bodyguard. The press called him a traitor, while the regime looked on in silence.

It was only after Salem died, many years after his trip to Israel and with Mubarak deposed, that Egyptian columnists demanded that the persecuted artist receive his due. “We would be short-changing Ali Salem to accuse him of collaborating with evil, when the real evil is among us, and we are doing nothing to deal with it,” wrote Amr El-Zant. Abd el-Monem Said, a journalist, researcher and former chair of Al-Ahram's Board of Directors, called Salem a “philosopher” and said, “His position exposed the meager tolerance that exists among us toward other opinions, and truth be told, the political hypocrisy prevailed to such an extent that it pushed him to the margins of the cultural scene, even though his work should have been placed at its center.” Gamal Abu el-Hassan wrote, “His trip to Israel in the mid-1990s may have been the most important thing he did in his career. It was a fitting act for an intellectual, searching for the naked truth.”

Salem was born in the Damietta governorate in 1936. His father was a policeman. When Salem was just 12, his brother died fighting in the battle over British Palestine. Salem’s first satirical theater piece premiered when he was just 24. After that, he wrote 26 more plays. He also produced 15 collections of satirical stories, as well as political articles in Asharq al-Awsat and other Egyptian dailies.

“He was a man of broad horizons, larger than life and yet delicate as well,” said Foreign Ministry staffer Ayellet Yehiav, an expert on the Middle East specializing in Egypt and a former spokesperson for the Israeli Embassy in Cairo. “He was a model of courage and of curiosity about the other. He was a man who dared to swim against the stream. Unlike his detractors and boycotters who claimed that peace only served Israel while wreaking ruin on their own country, he believed that peace really did serve Egypt.”

Yossi Amitai, a Middle East scholar who formerly headed the Israeli Academic Institute in Cairo, recalled a conference that took place in the Ibn Khaldun Research Center. He had been asked to address a free-thinking audience with a decidedly liberal bent. “In my speech, I called on the Egyptian left to conduct a ‘selective dialogue’ with opponents of the occupation in Israel. Ali got out of his seat and started scolding me: ‘Why a selective dialogue? And why limit it to opponents of the occupation in Israel? Dialogue can’t be selective. It must include all people and factions that are prepared to engage in an open exchange of ideas, including supporters of the occupation.’”

Professor Gabriel M. Rosenbaum noted that Salem was one of the leaders of the younger generation of Egyptian satirists toward the end of Gamal Abdel Nasser’s presidency. Rosenbaum, a researcher of Egyptian culture and literature, was a close friend of Salem’s. He now serves as director of the Israeli Academic Institute in Cairo. Seventeen years ago, Rosenbaum translated one of Salem’s most successful works, "The Oedipus Comedy: You Are the One Who Killed the Monster," into Hebrew. According to him, Salem was a true patriot. “There are a lot of people in Cairo who think the same way he did about Egypt’s relationship with Israel, but finding even one person who will support that position openly, without fearing the consequences, is rare indeed,” said Rosenbaum.

Articles in the Egyptian press eulogizing Salem are fascinating documents in their own right. In Salem’s heyday, the press crucified him; now they are crucifying the people who crucified him. Nevertheless, it must not be forgotten that the nature of the relationship between Cairo and Jerusalem is still determined by bureaucrats on both sides. Whenever you hear an Israeli military official or diplomat boasting that the relationship between Cairo and Jerusalem has gotten even closer over the past few years, you can be certain that they are not referring to any relationship between the two peoples. God forbid. What they mean is that military, intelligence or diplomatic relations between the two countries are warmer than ever.

If the Egyptian-Israeli peace were deep-rooted, and not just a convenient alliance of common interests, Salem’s passing would not have created such a gaping hole. The empty space he leaves behind would be filled by other cherished talents, the inevitable legacy of real peace. It would be teeming with various personalities, joint cultural initiatives and close ties. It would be saturated with a sense of brotherhood between the two peoples. While Salem and his partners do have some young, knowledgeable heirs who are motivated to bring about the right kind of peace, there are still too few of them. In fact, they are fewer than the fingers on a single hand.