The changes in the Arab world now offer the Israeli people the opportunity to establish human relations with the Arab people, starting with the Egyptians. 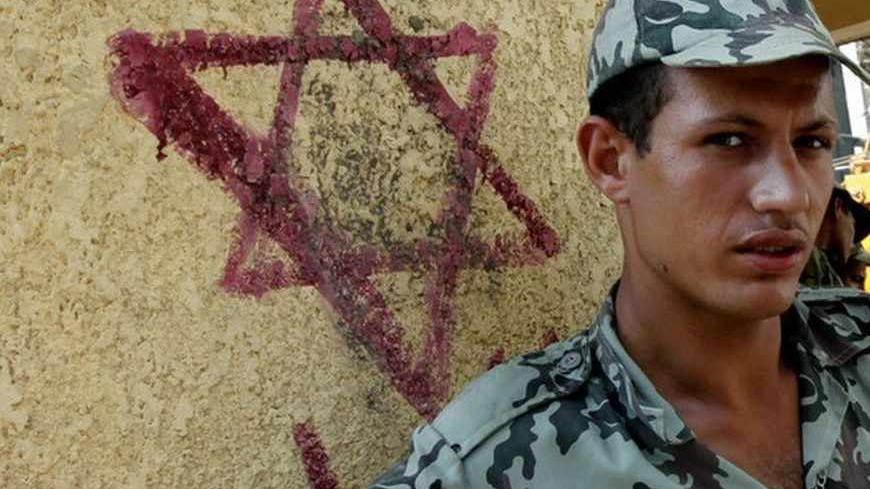 An Egyptian army soldier stands beside a star of David, on a wall surrounding the Israeli Embassy in Cairo Sept. 4, 2011. - REUTERS/Mohamed Abd El-Ghany

Given the violent images being broadcast from Cairo and reports of violent clashes in the streets of Alexandria between ousted Egyptian President Mohammed Morsi’s opponents and supporters, it is no wonder that so many Israelis, including this very writer, are wondering whether Egypt really is a “partner for peace.” As long as that thought keeps running through my head, I am reminded of my uncles and aunts who were sent by the people of the great poet Friedrich von Schiller, to the gas chambers to the sweet sounds of that anti-Semitic composer Richard Wagner.

There are still men and women among us who remember how their Hungarian, Polish and Ukrainian neighbors, all part of the “European cultural milieu,” turned them over to the Nazis. There is nothing like the Holocaust in all of modern history, and yet for Israelis and Germans alike, it was not enough to establish diplomatic relations between the two countries 20 years after the war was over. Despite the trauma, despite the memories, these two enemies became friends. Israel’s finest musicians now play in the Berlin Philharmonic, Israeli students pack the lecture halls of German universities, Israeli researchers attend scientific conferences in Munich alongside colleagues whose grandparents belong to the SS generation, and German colleagues are welcomed to Jerusalem with open arms.

This is not the case when talking about relations between the people of Israel and the people of Egypt (though for some reason, when talking about Arabs, the more commonly used term is “the Arab street”). Although 35 years have passed since Israel's then-prime minister Menachem Begin and Egypt's then-president Anwar Sadat signed the Camp David Accords, peace with Egypt is, at best, a formal agreement between two countries, or what we like to call a “cold peace.”

During deposed president Hosni Mubarak’s long term in office, Israel’s various governments made do with security cooperation, while complaining that Egypt was not fulfilling the normalization clauses of the peace agreement, and criticizing open manifestations of anti-Semitism in the Egyptian media. Meanwhile, in Jerusalem, as far as pundits and decision-makers in the fields of policy and defense were concerned, Israel’s interest in the Arab Spring could be summed up in three words: Sinai border security. Relations with Egypt meant relations with the heads of the Egyptian army and intelligence. It does not matter to them whether the ruler in Cairo was a corrupt dictator or a “Muslim Brother” who hated Jews. The main thing was that there was someone to talk to on the Egyptian General Staff, and if not directly, then at least through the Americans.

While visiting Cairo’s Modern Art Museum in the spring of 2011, I had a chance to get a closer look at the image Egyptian civilians have of Israelis. The usher at the entrance noticed the Arab slogan adorning the front of my cap, which I had bought at a souvenir stand in Tahrir Square. It read: “Lift your head up high. You’re an Egyptian. Youth of the Revolution, January 25, 2011.” When I told him that I came from Israel, he raised an eyebrow and said in disbelief, “I thought you supported Hosni Mubarak.”

It was this Egyptian usher and his friends who deposed Mubarak, and it was them who deposed Morsi. These are the people Israelis must speak to. Israelis have to mend the relationship and build mutual trust. They have to explain to them that the thugs who harm Arabs and incite against them do not represent the “Israeli street.” They must tell them that the racist Chief Rabbi of Safed Shmuel Eliyahu and his friends from the beit midrash (study hall) of bigotry are not the spiritual leaders for most of the Israeli public. It would certainly be a good thing if that same public went out to the streets to protest the disgusting new phenomenon called the “Price Tag” and against the appointment of that revolting individual from Safed, who calls himself a “rabbi.”

During that same visit to Cairo I discovered that the overthrow of the Egyptian government offers Israelis new channels of communication with their neighbors to the south. Professors Yoram Meital and Yossi Yonah, both of Ben-Gurion University of the Negev, and I met for a lengthy discussion with three young members of the “Liberal Forum of Cairo,” one of many dozens of organizations that have sprung up since the January Revolution. One after the other, all three of them said that they are open to a dialogue with Israeli society about peace and cooperation.

That same week, members of the Israeli Peace Initiative group, which supports negotiations on the basis of the Arab Peace Initiative, heard the exact same thing from Egypt’s Council on Foreign Relations, which is comprised of retired diplomats, security chiefs, and senior officials. They promised that if the Israeli government were to express a willingness to adopt the Arab initiative of March 2002, the effort to end the conflict would find a loyal partner in the new Egypt.

The decision by the Arab League Summit, which met in Qatar last March, to ratify the initiative indicates that the new regimes in the region regard the Arab Peace Initiative as essential to achieving a comprehensive settlement in the Middle East.

In addition to achieving a just and comprehensive peace between Israel and the Arab states, the Arab Peace Initiative offers Israel “normal relations” with all of its members. The fact that the Arab League followed up on this in May by sending a delegation to Washington to meet with Secretary of State John Kerry and discuss ways to advance negotiations between Israel and the Palestinians is further evidence that the possibility of establishing normal relations with the Arab states is still alive and kicking. This includes a new relationship with the Egyptian people. An Israeli government that prefers the alternative option of sending Kerry home empty-handed and perpetuating the occupation of the Palestinian people should remember that the concept of “solidarity” is not some Hebrew innovation. This time, the match lit in Ramallah could set the whole Middle East ablaze.