Palestinians Not Counting On Kerry's $4 Billion

The Palestinian leadership insists on negotiations based on the 1967 borders. 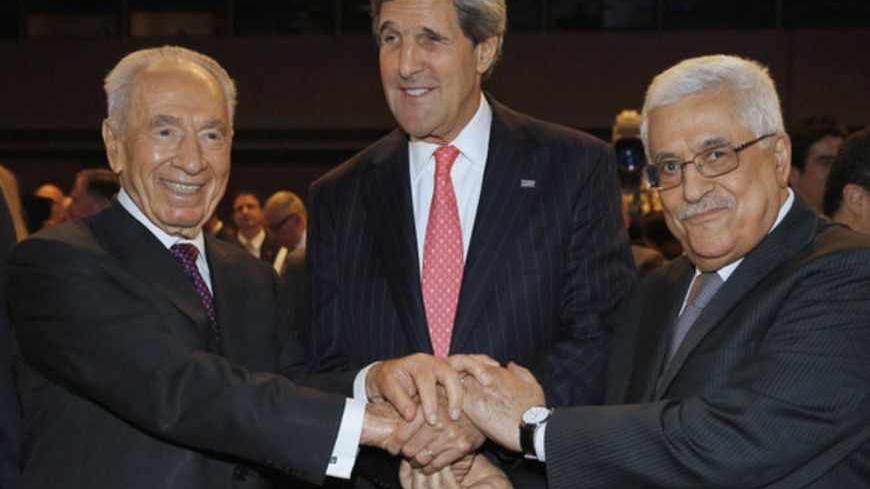 US Secretary of State John Kerry (C) shakes hands with Israeli President Shimon Peres (L) and Palestinian President Mahmoud Abbas at the World Economic Forum on the Middle East and North Africa at the King Hussein Convention Center, at the Dead Sea, May 26, 2013. - REUTERS/Jim Young

By the end of this week, the first in June, Prime Minister Benjamin Netanyahu and Palestinian President Mahmoud Abbas (Abu Mazen) are supposed to present US Secretary of State John Kerry with their positions regarding the renewal of negotiations based on the Arab Peace Initiative.

Al-Monitor has learned that the Palestinian leadership decided after internal deliberations to tell Kerry that it would not give up its demand to launch negotiations based on the 1967 borders at any price. At most, Abbas will agree to one meeting with Netanyahu, on the condition that the prime minister commits to presenting his map for permanent borders at that meeting. Only then, they assume, will it finally become clear what Netanyahu means when he says “two states for two people.” So here’s a bit of friendly advice: Don’t hold your breath. After all, this week marks 46 years of occupation. What’s the rush?

The Palestinian leadership’s decision to insist on the 1967 borders as a precondition for renewed negotiations came the day after the World Economic Forum (WEF) meeting ended in Jordan on May 27.

It was wonderful to see on the same stage Israeli millionaire Yossi Vardi with Palestinian businessman Munib al-Masri, and at their side, Jordan’s King Abdullah, Israeli President Shimon Peres, Abbas and Kerry. The moderator, WEF founder Klaus Schwab, was clearly pleased as he introduced the important guests, one by one.

It was exciting and moving to see Zionist religious Israelis, with their knit skullcaps, sitting in the conference hall side by side with Arabs in white kaftans. I wanted to write that I felt like a tenant in the home shared by the wolf and the lamb, but then I remembered another joke: In the Middle East, they bring the wolf a new lamb every day. This is exactly like Kerry's “economic peace.” In his speech at the conference, Kerry offered to sweeten the deal with a special international grant of $4 billion in return for Palestinian willingness to resume negotiations.

A senior Palestinian official told Al-Monitor that Abbas was mortally wounded by “the bone the Americans threw” toward the Palestinians at the lowest place on earth, the Dead Sea. It’s true. How low can you go? Imagine how our proud prime minister would have reacted to an offer to buy the Jews for money in return for a temporary construction freeze in East Jerusalem, for example.

By the way, I would advise the Palestinians not to start counting that money just yet — not just the sum that was promised, but also the money that already constitutes a considerable part of their budget. Senior European officials and a Japanese diplomat with whom I spoke in recent months say they are “fed up” with funding the Israeli occupation under the guise of a fictitious “peace process.”

And I would advise Kerry that instead of perpetuating the Palestinian dependence on handouts, he would be better off looking for their money in two other places: in Israel’s policy in the occupied territories or, alternatively, in a regional peace process.

The economic damage incurred to the Palestinian territories by the “policy of separation” that Israel adopted after the Hamas takeover of Gaza in 2007 amounts to much more than $4 billion. The World Bank and senior Israeli and international economists have determined that the ban on selling merchandise to Israel and the West Bank poses a major obstacle to sustainable economic growth in the Gaza Strip. According to data compiled by the NGO Gisha, the Legal Center for Freedom of Movement, since the beginning of the year (2013) and up to April, a monthly average of 20.5 trucks have left Gaza, some 2% of the monthly average on the eve of the blockade imposed by Israel. The sweeping and total ban on marketing merchandise of any kind that originates in Gaza to the West Bank and Israel has led to a situation in which 83% of Gaza's factories have shut down or are operating at half capacity or less. The closing of the West Bank and Israeli markets to the Gazan economy has deepened unemployment (over 30% — and almost 50% among young people — compared with 18.7% in the year 2000). The per capita GDP has not returned to its pre-Oslo Accord level (President Peres said at the conference that the situation in the territories before Oslo was worse than it is today).

By the way, whereas Kerry ignored Israel’s policy of separation and was careful to refer to Gaza and the West Bank as one political-economic-social Palestinian entity (as defined in the Oslo Accord), Israel has managed to brand the separation into the consciousness of important international media outlets; the Gaza Strip was totally absent from reports of Kerry’s speech in The New York Times, The Washington Post, CNN and Reuters.

Former Israeli security officials, intimately familiar with the issue, contend that even Israelis could benefit if the government rescinds its separation policy, both in terms of economy and security. Thus, for example, Brig. Gen. Shmuel Zakai, the former commander of the Gaza Division, said a year ago that “the crossing points should be opened and investment in Gaza should be encouraged. Israel must do this” (The Israeli Army Radio, June 2012); Reserve Brig. Gen. Kamil Abu-Rokun, the former head of Israel’s civil administration in Judea and Samaria (the West Bank), said earlier that the “growing prosperity in Gaza could also reduce Israel’s military activity. I believe people who can make a proper living think of their living and not of other things” (The Associated Press, Dec. 20, 2011). Col. Yuval Bazak, the former head of the Israel Defense Forces’ warfare doctrine department, recommended at the time that the army avoid hitting vital civilian infrastructure that was not tied to the enemy’s fighting capability, explaining that “an attempt to pressure civilians into putting pressure on their governments so that they exert pressure on organizations — not only doesn’t advance the war’s ends, it provides an excuse to blame Israel for creating a humanitarian crisis” (Institute for National Security Studies publication, “Army and Strategy,” November 2011).

The day following the Dead Sea conference, where Kerry promised the Palestinians a consolation prize of $4 billion for returning to negotiations that have already been stalled for 20 years, a modest, too modest, conference was held in Tel Aviv about the Arab Peace Initiative (see reports published on Al-Monitor). The NGO Israeli Peace Initiative (Yisrael Yozemet), along with the Center for Strategic Dialogue of the Netanya Academic College and the Friedrich Ebert Foundation convened the conference in an attempt to place the Arab initiative on Israel’s public agenda. After greetings by Jordan’s ambassador to Israel, Walid Obeidat, and the deputy Egyptian ambassador, Mustafa al-Kuni (yes, yes — an official representative of the “Muslim Brother” Egyptian President Mohammed Morsi spoke at the conference in Tel Aviv), it was the turn of Aharon Fogel, chairman of the Migdal Insurance Company and former director-general of the Israeli finance ministry, to lay out the economic advantages of the initiative. According to Fogel, a regional peace agreement will result in a long-term reduction of some NIS 30 billion (around $8 billion) in Israel’s defense expenditure and additional annual growth of 2%.

So for all those looking for the money, as well as those promising it — the coin has been laying for years under the street lamp, waiting for the leader who will pick it up.