A new peace initiative will be presented at the World Economic Forum in Jordan this weekend, May 24-26. 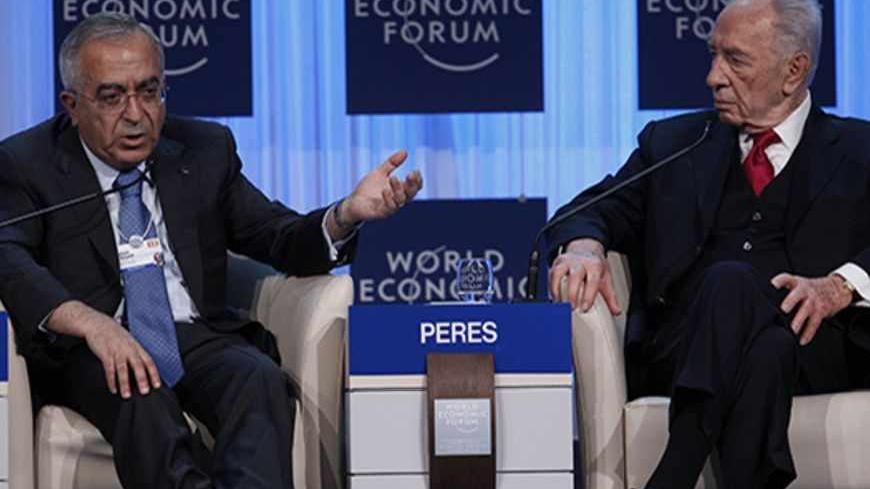 Amid US Secretary of State John Kerry's latest shuttle to the region, a group of Palestinian and Israeli businessmen are set to present what they call a joint appeal to push their governments out of the current political rut and get a step closer toward realizing a two-state solution. The document, aptly titled "Breaking the Impasse," has been kept secret for some time, but the people involved in its masterminding include Palestinian philanthropist and industrialist Munib al-Masri and high-level Israeli businessmen such as high-tech entrepreneur Yossi Vardi.

Many of the Israeli figures involved include former government officials, army generals and military figures who played roles in previous negotiations, and “people who understand that a peace agreement would boost chances for business and job opportunities,” according to Elias Zananiri, a political adviser and public relations consultant closely familiar with the initiative.

The initiative is to be presented during the World Economic Forum (WEF) held at the Dead Sea in Jordan on May 24-26. The Forum, hosted by Jordan's King Abdullah, is slated to be attended by Kerry, Israeli President Shimon Peres and Palestinian Authority (PA) President Mahmoud Abbas.

The initiative was born about a year ago at the WEF Middle East and North Africa conference in Istanbul, according to the Financial Times. Numerous similar initiatives have been taken jointly by Palestinian and Israeli business leaders in the past, but the secrecy surrounding this effort seems to suggest that this may be a more serious undertaking taken at a time when most ideas on how to revive the moribund talks have been exhausted.

The idea, Zananiri told Al Monitor, is to submit a joint paper with parameters that would be based on common denominators — points that are agreeable to both sides. “The aim is to put pressure on the governments and to say, '[Because] we, as the private sector, pay the price of the conflict when we lose in our businesses, we should be able to have a [say] in designing a future for both parties along the lines of the two-state solution [and] based on the UN resolutions and the Arab Peace Initiative,'” Zananiri said.

“The Palestinians are very careful not to include anything that would be detrimental to the official stance of the PA and the Israelis are sensitive to some issues that reference the right of return or the 1967 borders,” Zananiri elaborated. “[But] they did speak of the Arab Peace Initiative, UN resolutions, and a just and agreeable solution to the question of refugees along the lines of Resolution 194. There is a reference to the … signed agreements between Israel and the Palestinians. Of course those agreements and the road map call for Israel's immediate cessation of settlement activity.”

The initiative has already been criticized by some as tantamount to a normalization of relations with Israel with no benefit to the Palestinians. “I don't see it that way,” Zananiri said. “If you can get some influential Israelis who have a say [and] to whom the [Israeli] government listens … and … who control something like 40% of the business in the private sector in Israel … If you can get these kinds of people on your side to promote the Arab Peace Initiative, then what is wrong with that?”

Others have dubbed it an act of futility that puts the carriage before the horse. “Movement shouldn't be made on the economic front before the political one,” said one Palestinian source who is aware of the initiative. “This is a business venture. It won't change history. A political solution from an economic entry point has been tried before — throughout the Oslo Accord years — and it failed miserably and will fail because our problem is political. The economy will only be used to prolong the status quo.”

It is unclear if and how the initiative will bring about measures to bolster the shattered Palestinian economy. Palestinians do not control their natural resources, borders, movement of people and goods, or currency to be able to revive the economy. Poverty stands at 25.8% in the occupied territories, and the unemployment rate is 31% in the Gaza Strip and 20% in the West Bank.

This joint call for action by the businessmen comes at a time when Kerry's efforts to bring Palestinians and Israelis back to the negotiating table have so far proved fruitless. Kerry has been pushing for joint economic initiatives as a way to revive the peace process ever since he began his shuttle diplomacy following US President Barack Obama’s regional visit back in March.

He has so far come up empty-handed as Israel continues to clamp down on the occupied territories. According to the Israeli daily Maariv, one of the gestures Kerry had asked Israel to make to the PA was permission to build factories in Area C in the West Bank, which is under Israel's administrative and security control. Israel rejected his suggestion. Kerry's requests of Prime Minister Benjamin Netanayhu's government to cease settlement building have also gone unheeded; the same week Kerry was due in the region, Israel announced it would “legalize” four settlement outposts that were slated for demolition.

It may be easier to ascertain how the initiative will be met on the Palestinian street — as opposed to how it could fare in Israeli circles — where skepticism at seemingly endless initiatives and agreements is running high. The latest gesture by the Arab League to get the ball rolling — the proclamation that Palestinians are willing to accept a land swap in the event of an agreement — was met with a deafening silence from Israel. In the meantime, it remains to be seen whether this new initiative will actually be able to achieve what countless before it have not.

Dalia Hatuqa is a contributing writer for Al-Monitor's Palestine Pulse. A print and broadcast journalist based in the West Bank, she writes about politics, the economy, culture, art and design. Her work has appeared in The Atlantic, Foreign Policy and the Christian Science Monitor, and she is a regular contributor to The Economist's Prospero blog, Al Jazeera and The National (UAE). On Twitter: @daliahatuqa

[Editor’s note: An earlier version of this article named members of this initiative whose names have been removed as their participation is not confirmed.]