Is There a New 'Jordan Option'?

A meeting in Jordan between King Abdullah II and Palestinian Authority President Mahmoud Abbas, soon after the visit of US President Barack Obama to Jordan, may signal a new role for Jordan, writes Akiva Eldar. 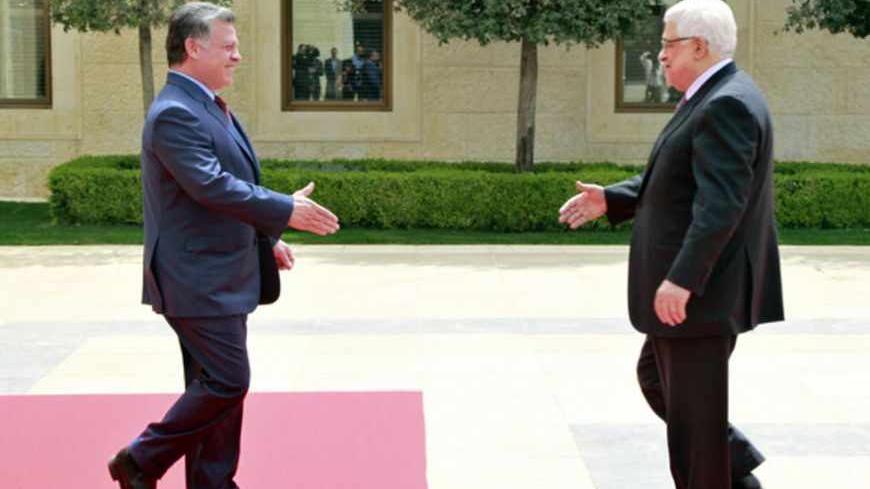 A chain of developments in Israel and its surroundings since the historic visit by US President Barack Obama could indicate that the busiest personality in the world did not abandon the US economic, employment and health burdens only to lay wreaths on graves in Jerusalem and to chat with young people in Ramallah.

The list starts out with the reconciliation between Israel and Turkey and continues with the decision by the Arab League summit in Qatar. Almost at the same time, Secretary of State John Kerry emerged from a meeting with Prime Minister Benjamin Netanyahu and Justice Minister Tzipi Livni with a promise that the new Israeli government would not embarrass the US President with unilateral steps, such as announcing the construction of a new neighborhood in east Jerusalem. In return, Netanyahu was told that Palestinian President Mahmoud Abbas (Abu Mazen) had promised that the Palestinian Authority would freeze all moves vis-à-vis international organizations for several months, first and foremost its intention to enlist the international criminal court against Israel’s settlement enterprise. Last Wednesday [April 3], the Fatah leadership granted formal approval to this important step en route to renewal of negotiations over a permanent arrangement. This decision was not conditioned on implementation of the Palestinian demand for official Israeli agreement to freeze settlements as a precondition for renewing negotiations.

As a Passover gift, Israel received a decision by the Arab League summit ratifying its 2002 peace initiative. The Palestinian Authority, Israel’s partner for the two-state solution in the spirit of the Arab initiative, received a commitment from the League of an emergency billion-dollar donation to strengthen the standing of the Palestinian peace camp. This can be regarded as a pan-Arab guarantee of the Palestinians’ return to the negotiating table. One must remember that Egypt, currently headed by the Muslim Brotherhood’s President Mohammed Morsi, is a senior member of the Arab League. Before being appointed as the League’s secretary general, Nabil al-Arabi served as Egypt’s foreign minister. One can therefore view Egypt’s support of the Arab Peace Initiative as a clear signal to Hamas not to spoil the party. It appears the message has been received in Gaza. Not only did the Hamas government take vigorous steps to stop the Kassam rocket attacks on Israeli towns and villages, Khaled Meshaal, who leads the movement’s pragmatic line, was re-elected to head the Hamas political bureau, while his sworn rival, Mahmoud al-Zahar, who led the radical line, was ousted.

An additional bud of diplomatic activity emerged last week at the royal palace in Amman. Several days after Obama’s festive visit and before the start of Kerry’s working visit, an important event took place in the Jordanian capital: The Palestinian president, Abu Mazen, formally granted King Abdullah II the important title of “Guardian of the Holy Places in Jerusalem.” This is one of the central articles in the surprising agreement they signed on March 31. In order to understand the significance of this step, one should remember that Yasser Arafat, considered the charismatic all-powerful leader of the Palestinian people, vehemently refused to grant this coveted title to the King of Jordan — a title which heightens prestige throughout the Islamic world. The move by Abbas, who is considered in Israel as a “weak leader,” even surprised most of his closest advisers.

In the new agreement, Abdullah does not only attain the coveted title. Both leaders agreed that while sovereignty over Arab Jerusalem will be placed in the hands of the Palestinian government within the framework of a peace agreement with Israel, a “unique role” will be reserved for Jordan in conservation of the city’s holy sites and it will continue to represent their interests at relevant international fora, as well as continuing to administer the Waqf in Jerusalem and its properties, in accordance with the laws of the Hashemite Kingdom. Along with the emphasis on Jordan’s position at the holy sites in Jerusalem, the agreement emphasizes Jordan’s central role in negotiations over Jerusalem — one of the two sensitive symbolic issues at the heart of the dispute between Israel and the Palestinians (the other being the right of return of the 1948 refugees).

In order to forestall all doubt, King Abdullah and President Abbas noted that King Hussein’s 1988 decision to cut Jordan off from the West Bank did not include Jerusalem’s holy sites, especially Haram- al-Sharif (the Temple Mount). The first message to emerge from the agreement is quite clear — a violation of the status quo in East Jerusalem, the part that Israel annexed in 1967, is not just a Palestinian matter. From now on, it must be clear to Israel that any attempt to violate the current arrangement on the Temple Mount and its surroundings will be considered provocation of an Arab neighbor who has scrupulously maintained diplomatic and security channels even after the tremors of the Arab Spring that shook up the region. The second message is that the severing of its connection to negotiations over the future of the West Bank did not cut Jordan off from discussion on the fate of the place described by Netanyahu as the “bedrock of our existence.”

A source close to Abbas told Al-Monitor that he is fairly certain that the proximity of the Obama-Abdullah meeting to the Abdullah-Abbas agreement is no coincidence. He surmises that the proximity of the Arab League summit in Qatar and the Jerusalem agreement signed in Amman is not accidental, either. These pieces of the puzzle join together to form a picture of a new regional move. A rosy picture? Only Obama knows.