From Tahrir to Taksim

The awakening of the silent majority in Istanbul might signal to Israelis that not all of the Turkish people support the policies of Prime Minister Recep Tayyip Erdogan. 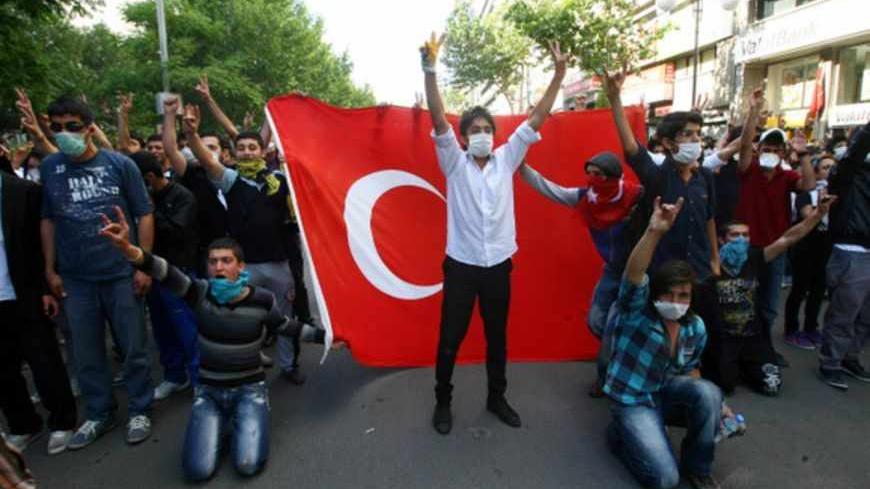 There’s an old Israeli saying: “A guest passing through sees every problem.” While I don’t know how accurate that expression is, I do know that I could foresee the recent riots in Turkey during my last visit there, just a few months ago. Even then I heard plenty of people — many, many people — who had no qualms about calling Prime Minister Recep Tayyip Erdogan a “dictator.” Those same people said that no effort should be spared to bring him down.

Statements like these made a deep impression on me because I was so surprised to hear them. Until just a few months ago, before Prime Minister Benjamin Netanyahu’s apology and reconciliation with Erdogan, the average Israeli who followed TV news about Turkey or read about it in the newspaper lived under the impression that Turkey as a whole, or at least the bulk of Turkey, is becoming something like Iran. The overall feeling was that the country spoke with one voice, the resolute voice of Prime Minister Erdogan. Ever since his Justice and Development Party (AKP) came to power in 2002, Israelis felt that Turkey was undergoing a dramatic policy shift. Local television stations substantiated this. It looked like Turkey was transforming from a tolerant, enlightened, Western nation; ''an island of sanity in the Middle East,'' into something very different and menacing; a country which was doing all it could to draw closer to the Arab League, Iran or the Muslim Brotherhood.

Tensions between Israel and Turkey intensified, and statements made by Erdogan and his foreign minister, Ahmet Davutoglu, sounded rather unpleasant, and rightfully so. The Israeli public could only conclude that these statements represented the conventional wisdom of most of the Turkish people, who had made a U-turn in the direction of contemporary Islam and were casting off a bold friendship with its one regional ally, Israel.

Apparently, other voices coming out of Turkey were inaudible, because the media has one very deceptive characteristic: It usually focuses and “zooms in,” if you will, on the official line as stated by the leadership (as it does with Iran, for example), or on violent demonstrations and other events considered camera friendly. The other voices — the silent majority, which is not quite so vociferous in expressing positions counter to Erdogan’s official policy — have no mouthpiece. (By the way, we are talking about the same press which, just one day after the riots in Turkey last weekend [May 31], was quick to post banner headlines about the “Turkish Spring,” covering the entire space above the fold.)

That is why, when I arrived in Turkey as a guest passing through, I landed there under the impression that “We are all Erdogan.” Then I encountered other, unexpected voices.

A salesman at a clothing store, who recognized me as an Israeli, gave me a warm hug. “Erdogan,” he told me, “is like a horse with blinders on. He can only see straight ahead. He can’t look around to the sides.” Other locals, who joined the conversation, agreed that Turkey is going through one of its less glorious phases in governance. Someone tossed out the word “dictator,” and even those who didn’t speak English starting nodding their approval.

And so, during a quick visit to Turkey, I was exposed to a mood that received no coverage by the media in general and the Israeli media in particular. I have already written on this site about how I believe that the idea that Turkey became hostile overnight, while popular in Israel, is actually mistaken. I said that based on my brief impressions after a short stay there. Most of the Turkish people, I wrote, do not despise Israel. If anything, they loathe the Turkish prime minister and the people surrounding him.

Local experts on Turkey dampened my enthusiasm by repeatedly claiming that Erdogan has vast, “wall to wall” support and that if he runs for election again, he would win a “resounding victory.” In fact, during the last elections, which took place on June 12, 2011, he did win a resounding victory, but this victory was accompanied by a sense of missed opportunity. Erdogan failed to win the majority he needed to pass constitutional reform unilaterally.

Even now, I do not know how widespread support really is for his Justice and Development Party. Still, there can be no doubt that the claims reverberating throughout Turkey about how the country is headed in directions that can only be described as undemocratic, if not outright dictatorial, were expressed openly back then, too. They were said by the simple folk, who dared to express their concerns about the future of their country.

Do they indicate that great change is about to take place in Turkey?

It’s hard to tell. More importantly perhaps, Syria taught us that it is dangerous to draw comparisons with riots that erupted in other places, which led to a revolution. Nevertheless, I can’t help remembering a visit I paid to Cairo some four months before the demonstrations began in Tahrir Square, which ultimately led to the downfall of former Egyptian President Hosni Mubarak after more than three decades of near absolute rule. I returned from Egypt with the feeling that Mubarak had the love and support of the great Egyptian people. No one dared say a word condemning him. His portraits hung proudly throughout Cairo, and all the taxi drivers spoke glowingly in praise of the great Rais.

Their anger erupted in the streets just a few months later.

It was only then that I realized how much the fear of the Mukhabarat (Egyptian secret police) really stifled the people of Cairo. No one dared criticize the government, and certainly not to a tourist, especially an Israeli tourist who happened to be a journalist.

As the riots were breaking out, I received a copy of the book, "Inside Egypt: The Land of the Pharaohs on the Brink of a Revolution" (New York, Palgrave Macmillan). Though John R. Bradley’s book was published in 2008, over two years before the revolution in Egypt, all anyone had to do was to peruse it to find a completely different picture of Egypt than the one I had during my visit there. Bradley recognized how much the people of Egypt really loathed Mubarak, and that, sooner or later, he would be forced to relinquish power. It simply happened sooner rather than later.

“During two years,” wrote Bradley, “I didn’t find a single person who had anything good to say about Mubarak.” But Bradley needed two years in the Land of the Pharaohs to win the trust of the people on the street and to get them to speak. I was in Turkey for just a week and heard similar things there.

I have already noted how it would be wrong to compare the two cases. Nevertheless, one can only wonder how much the media is misleading the public, and even more troubling, how much it is misleading policymakers. That is why we woke up one morning to discover that not everyone in Turkey agrees with Erdogan.