The announcement of a historic reconciliation between Turkey and Israel catches Shlomi Eldar in the middle of a family vacation in Antalya. 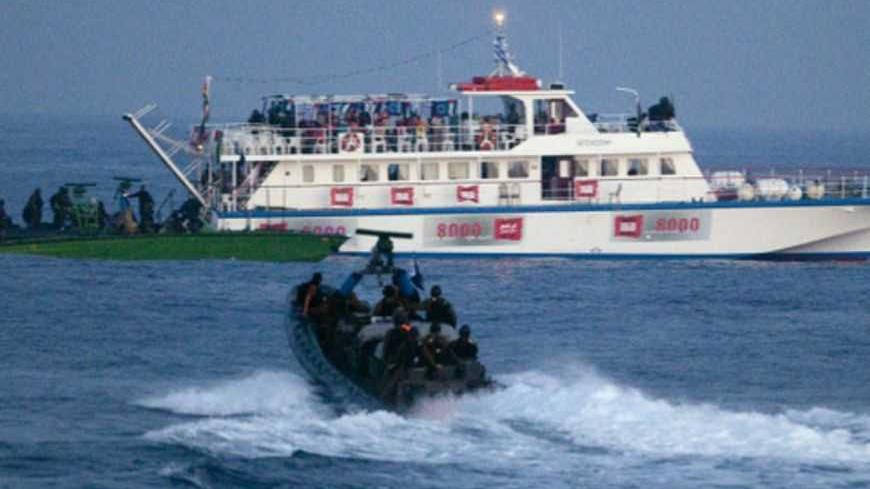 Israeli forces approach one of six ships bound for Gaza in the Mediterranean Sea May 31, 2010. - REUTERS/Uriel Sinai

Belek, Antalya - It seems so appropriate that I’m here in Turkey just when Prime Minister Benjamin Netanyahu and Turkish Prime Minister Recep Tayyip Erdogan make up. I came here for a family vacation, after giving countless explanations to friends as to why — and how dare I — visit a country that has become so hostile, and whose prime minister makes incessant verbal assaults against my own country.

As soon as I heard about the historic reconciliation, I went down to the lobby of my hotel in Belek and tried to work out my new status there. I wanted to know if there was any change in the way my Turkish hosts perceived me as an Israeli. Until yesterday [March 22], I was met with nervous chuckles and wayward glances whenever I introduced myself. That was what happened when my children and I shared an elevator with a guest in a tailored suit. We exchanged a few pleasantries, but when we reached our final stop, he asked, “Where are you from?”

The uncomfortable silence was interrupted when both of us laughed to release the tension. There were no more words. There was no explanation, no excuses. I am sure that he wanted to ask, “What brings you here? You’re the only Israeli here. All the others have stayed away.” Or maybe what he really wanted to ask was, “What the hell happened between us?” I wondered whether he also supports Erdogan and identifies with his incessant attacks against Israel, or whether he belongs to the growing opposition.

I’ve visited Turkey four times since the Mavi Marmara flotilla incident. Just two hours after the crisis erupted on the high seas off the coast of Gaza, I was boarding the first plane to Istanbul. At the airport, a border policeman asked me, “Why Israel boom boom boom?” with his thumb raised and his finger pointed at me, just in case I didn’t understand what he meant.

By noon I was already entering the offices of the IHH, the group that launched the Marmara flotilla, which brought the crisis between Israel and Turkey to its climax (it should be noted that things started going downhill before that). Standing in their crowded offices, I identified myself as an Israeli journalist, and much to my surprise, I wasn’t thrown out. Instead, the activists simply requested that I keep a low profile. As if by way of explanation they told me that some of the people sitting there were the families of people who were killed or wounded on that blood-soaked flotilla.

Two days later, I took an “uncalculated risk” and photographed the mass demonstration under way in Taksim Square downtown. Tens of thousands of angry demonstrators festooned the square with the flags of Hezbollah and Hamas. They waved placards with pictures of Sheikh Ahmed Yassin and Hezbollah Secretary General Nasrallah, and even of “the Engineer,” Yahya Ayyash, who was responsible for killing hundreds of Israelis in suicide attacks (and who Israel later eliminated with a bomb planted in his cell phone). The one thing I will never forget, however, was a slogan that appeared on so many of the signs, quoting what Prime Minister Erdogan said to Israeli President Shimon Peres at the Davos Economic Summit: “You people know how to kill.”

Ever since then, relations between the two countries, which were once the best of friends, have deteriorated steadily. Whenever a proposal was made to end the dispute, it was met with verbal assaults and provocative statements by Erdogan, and further invective and more provocative remarks by former Foreign Minister Avigdor Liberman and his deputy Danny Ayalon (who can forget how he humiliated the Turkish ambassador by seating him in a low chair during a formal protest?). Thousands of articles have already been written about it. All of them analyzed the situation and wondered whether there was even the slightest chance to repair the relationship and restore the vital alliance between the two countries, while the Muslim world is raging all around them. The answers were mostly pessimistic. But then President Obama came to Jerusalem and managed to achieve the incredible. He was able to convince the two leaders that honor may be important, but regional interests are more important.

As I wandered across the hotel, smiling broadly wherever I went, I thought to myself that the next time I come here I won’t be alone. Very soon, many of those Israeli vacationers who disappeared overnight will be packing Turkey’s hotels and nightclubs again. They may even be back this Passover.

Despite the conventional wisdom, most Turks never hated the Israelis. They defined the crisis as a “political quarrel between the two countries’ leaders,” and stressed that it should not have any impact on the two peoples, and certainly not on business. They tried to explain that they don’t all think like Prime Minister Erdogan or Foreign Minister Davutoglu, but even that didn’t help. Israelis never went back to Turkey.

On the morning after the reconciliation, Tulka, my Turkish travel agent, told me that he had visited Israel before the crisis and spent half a year studying Hebrew at an ulpan [Hebrew intensive language school] in Beersheba. He did this so that he could communicate better with Israeli tourists, but by the time he got home there was no one left to talk to. In fluent Hebrew he described how he spent the next year and a half sitting in his home without any work. Then Arab Israeli tourists began coming to Anatolia, so he started learning Arabic. The problem was that the Jews never came back, and whatever he earned from Arab Israeli tourists wasn’t enough to support him.

Tulka is smiling happily now. He believes that the Israelis will be back, and that they will see how much Anatolia has grown and developed since they left. Israelis, he explained, are especially fond of the “all-included” packages available, and these have only gotten better. Dozens of extravagant hotels, resorts, and pools have been built, drawing tourists from around the world. This strip of land, neglected for decades, has become a source of pride for the Turkish people and a veritable paradise for their guests.

“That’s it,” said Tulka. “Now we hope to go back to the way things were until 2008.” Then he confided in me, saying, “You know that everyone is happy about it. Whenever I walk through the market, people keep asking me, 'When are the Israelis coming back?' because Israelis buy things. Unlike other tourists, Israelis love to shop. We learned Hebrew because of them, and never did we hate any Israeli, not even for a minute. We’re friends, and friends stay friends, even if they sometimes get into a little argument.”

My travel agent Tulka is not alone. Everyone I spoke to responded the same way. Last time I was here, I witnessed that angry demonstration in Taksim Square. This time I didn’t see any anger in the eyes of the people I met. All I could sense was the feeling that Israelis and Turks alike had foolishly missed out on an opportunity by pushing each other into a corner. The one thing I did hear from everyone — from the doorman to the most senior hotel managers — was the same question repeated again and again: “What took you so long? You could have made the same apology three years ago.” Or, as one of them put it, “What was it we were asking for? All we wanted was an apology for the deaths of nine Turks and some compensation. That’s it. Nothing more. Do you know how much fun the Israelis had here all these years? Isn’t it a pity to lose that?”

Try explaining to them that “honor” plays a big role in Israel, too.

By the way, other guests at my hotel include the Saudi national soccer team, which is training for the World Cup preliminaries, and the Iranian youth soccer champions. That’s how it happened that my two Israeli children were playing soccer with the captain of Iran’s national soccer team for youth on the hotel’s lawn. When they asked me to fill in as goalie, I took my position and watched the soccer ball whiz by me. All throughout the game, I couldn’t help thinking, “What a world we live in!”

All the newspapers I saw on the streets outside the resort, at the newsstands and in the cafés, carried huge pictures of Erdogan, Netanyahu and Obama, together. One particular photomontage showed Obama whispering into Netanyahu’s ear, while Erdogan watches, off to the side. In that picture, the Turkish prime minister has the serious demeanor of a man who thought long and hard before finally deciding to accept the apology and forgive. “Apology accepted,” read the headline in Hürriyet. “Apology and compensation,” read the headline in Milliyet. “Back to a state of calm with the Israelis,” said the headline in another paper.

Calm and tranquility go well together, and Turkey is a pretty good place to “catch some of that.” So I’m off to order a poolside cocktail.