In contrast to the revival of Hebrew studies in Gaza, Israeli students are reluctant to learn Arabic, writes Shlomi Eldar. 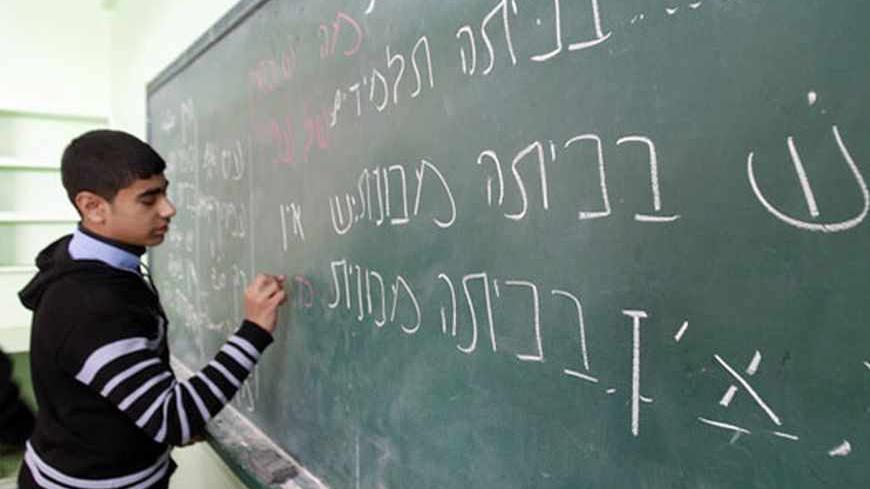 A Palestinian ninth-grade student writes on the blackboard during a Hebrew class at a Gaza school in Gaza City, Jan. 28, 2013. - REUTERS/Ahmed Zakot

A few months ago, I received a call from a young Arabic teacher who worked at a high school in the suburbs of Haifa in northern Israel. He told me his name and explained why he called me. “My students refuse to learn Arabic,” he said. “They are very antagonistic toward the language itself.”

The truth is that I wasn’t quite as surprised about what he was describing as by the very fact that he contacted me about it. “Is it really that bad?” I asked.

“Yes,” he said. “Whenever I try to convince them to learn the language, it only gets them angry. I explained to them how important it is to know the language of our neighbors, but they insist on correcting me. ‘Enemies,’ they say, ‘not neighbors.’”

“Talk to them,” he responded. “Stand before them and tell them about your encounters with Arabs. Tell my students to regard them as people. That’s the first thing. Maybe then they’ll be convinced to learn their language too.”

The teacher was certainly convincing, so I went to the school and spoke to his class. I have no idea how convincing I was. I presented them with the other side of the conflict, the side that they didn’t want to know about. I told them about the people who live in Gaza and the West Bank. I described Arab society, culture and politics. I went into detail about their goals and ambitions as well as their living conditions. I tried to get across the idea that not all of them want to kill us, in fact, not even most of them.

Overall, the students expressed interest in the topic, though some were more interested than others. But it was only far into the talk that I really felt I was able to “grab their attention.” One simple fact did the job for me. “In the Gaza Strip,” I told them, “there are lots of kids your age and even adults your parents’ ages who are learning Hebrew.” This really surprised them. The discussion took off from there.

I told them that, as of this year, Gaza’s Hamas government has decided to encourage the study of Hebrew in their schools. It may still be an elective, but it’s a highly recommended one in the Gaza Strip, while Hebrew-language classes in the Islamic University are packed.

The first institute in Gaza to focus on Hebrew was opened 20 years ago by a Hebrew teacher named Samira Srur. She herself studied Hebrew at the language institute Ulpan Akiva in Netanya, together with new immigrants, mostly from the former Soviet Union. We became friends, and she told me how she read a poem by Chaim Nachman Bialik to the students in her Hebrew class and explained his status in Israel as the country’s national poet. This young teacher from Khan Yunis in the Gaza Strip later left for England to get her doctorate, and we lost touch. But it wasn’t because of the geographic distance separating us; it was when the second intifada erupted [2000], destroying the little cooperation that existed between Israelis and Palestinians.

Before that, students from across the Gaza Strip, representing every age and socioeconomic background, packed her home in the Rimel neighborhood in the afternoon to read their first words and sentences in Hebrew from booklets produced by Ulpan Akiva.

“Hello, student. I am a teacher,” they read from a text with all the vowels marked on it. “What’s your name?”

“My name is Yoseph, and I am a new immigrant.”

A lot of water has flown into the Gaza Sea since then, but suddenly we are witnessing a brand new phenomenon. Hebrew classes that were abandoned over the past decade have suddenly started filling up again. “What happened? What changed?” I asked one teacher, Nader, who is an instructor at the Islamic University.

“There are lots of reasons why students are so diligent in attending these classes,” he told me. “First of all, it’s happening because Hamas decided that the Hebrew language would be studied in schools here. Lots of young people jumped on board. They’re learning it so that they can become teachers in the educational system.” Nader then added that Palestinian entrepreneurs, who export their goods to Israel, are also learning Hebrew to expand their businesses.

One thing Nader wasn’t willing to discuss at any length was another group of students studying Hebrew in Gaza: young people hoping to get accepted to the various military intelligence divisions of Hamas. Local intelligence is based, among other things, on accessible information, and includes reading and listening to the Israeli media. Mastering the Hebrew language can help them put together a daily profile of what is happening in Israel and analyze the shifting moods and trends as they are presented in Israeli newspapers, and on the radio, television and websites.

I was reminded of how the Hebrew teachers at Samira Srur’s school in Gaza recited the story “From Enemy to Lover” to me. They said that this story by S.Y. Agnon, winner of the 1966 Nobel Prize for Literature, touched them more than anything else.

Samira described to me how Agnon’s protagonist built his meager home, which could not withstand the winds raging outside. Once it collapsed he realized that its foundations weren’t deep enough. We all understood the metaphor. It would be interesting to find out what the favorite story is today for students learning Hebrew at the Islamic University.

And so, in honor of Samira, I include a brief, optimistic piece about neighborliness, which appears at the end of Agnon’s story:

From then on, the wind moderated its bluster and behaved with common courtesy whenever it came. And because it behaves with courtesy to me, I make a habit of acting courteously to it. When it comes, I go out to greet it, and invite it to sit beside me on a bench in the garden, sheltered by the trees. And so it comes and sits. And when it comes it brings a sweet mountain scent with it, and a sweet scent from the valleys, which it wafts before me as if with a fan.

And because it is genuinely repentant, I will not remind it of its past transgressions. And when it takes leave of me and departs, I ask it to return, to come again, just as one would with a good neighbor. For we really are good neighbors now, and I genuinely love the wind.

And it is quite possible that it loves me too.

(“From Enemy to Lover,” S.Y. Agnon, Schoken — original translation of the Hebrew text).

And why wouldn't Haifa and Gaza students learn to translate this story?