Amendments and changes to laws on the books from the former Iraqi President Saddam Hussein regime and the American occupation are shaking up the Iraqi judicial system, reports Ali Abel Sadah. 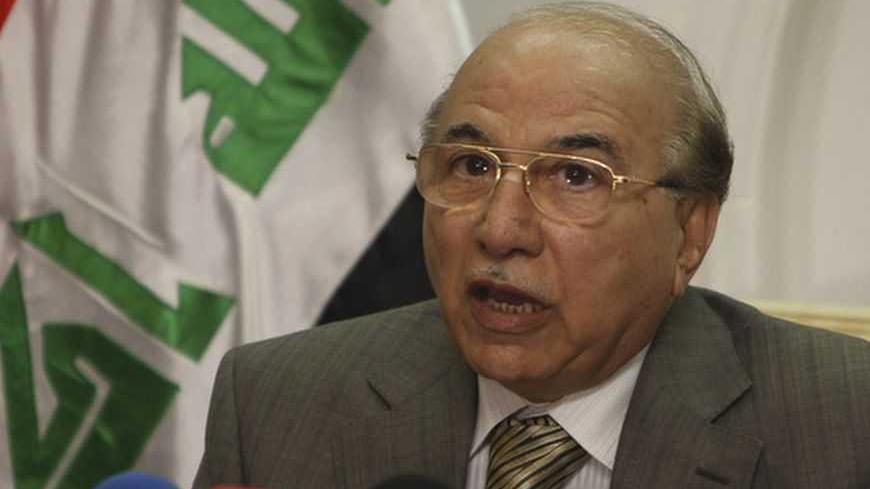 The changes sweeping across the Iraqi judiciary have reached long-serving Chief Justice Midhat al-Mahmoud. Despite the fact that Iraqi politicians who form the opposition to Prime Minister Nouri al-Maliki have stated that Mahmoud was deposed in accordance with the de-Baathification Law, the Judicial Council confirmed that new legislation passed by parliament mandates that the chief justice be replaced with a new judge.

The Iraqi judiciary is comprised of the Court of Cassation, which ratifies the rulings of Iraqi judges and has final say in such matters, and the Federal Supreme Court, which rules on issues related to federalism and constitutionality.

Under the new law passed by parliament, the head of the Court of Cassation is now the chief justice of the Supreme Judicial Council, and the head of the Federal Supreme Court cannot hold any other position.

Thus the council decided to remove Mahmoud from his position and restore him to his former post as head of the Federal Supreme Court.

The Judicial Council did not reveal the mechanism used for selecting Humairi as chief justice, nor did it reveal the names of the other judges being considered for the position that Mahmoud had previously held for years.

Iraqi politicians claimed that Mahmoud’s replacement came about due to the de-Baathification Law. Paul Bremer, then the administrator of the Coalition Provisional Authority of Iraq, issued this law in 2004, banning members of the Iraqi Baath Party from holding government positions.

Iraqi politician Sabah al-Saadi, a Shiite lawmaker who split from the ruling National Alliance and has been a steadfast opponent of Maliki’s government for years, said in an interview with Al-Monitor that “Iraqi citizens filed complaints against Chief Justice of the Supreme Judicial Council Mahmoud for his involvement in crimes against humanity [...] Mahmoud is responsible for a crime that occurred during the reign of former Iraqi President Saddam Hussein in which more than 10,000 Iraqi citizens were mutilated, for he upheld Hussein’s orders that draft dodgers and deserters have their ears cut off.”

In Iraq, there is compulsory military service for all men over the age of 18, and during the mid-1990s Hussein had ordered that deserters be punished.

Mahmoud was a judge when Resolution 115, which legalized this punishment, was passed on June 25, 1994.

Bayraktar told Al-Monitor that MP Saadi’s claims are inaccurate. He emphasized that Mahmoud was removed from his position because of the new law, which regulates the administrative structure of the Iraqi Judicial Council, and added that the MP’s accusations played no part in this change.

In another development, the National Commission for Accountability and Justice, which oversees the implementation of de-Baathification in Iraq, said, “The organization is working on verifying the information and communications regarding the inclusion of some judges in the procedures the commission, which includes Mahmoud and a number of other judges.”

Mahmoud does not enjoy good relations with civil-society organizations, especially opponents of Prime Minister Maliki, who accuse him of being Maliki’s puppet in court.

It is worth noting that when Mahmoud was head of the Judicial Supreme Council in 2010, he resolved the dispute over the general election’s vote tally between Maliki and former Prime Minister Iyad Allawi, a Shiite leader and head of the al-Iraqiya List. Mahmoud decided that Maliki represented the largest parliamentary bloc and should form the government, despite Allawi’s coalition having won 91 seats, just two fewer than Maliki’s State of Law Coalition.

Mahmoud was born in Baghdad on Sep. 21, 1933. He attended primary and secondary school in Baghdad, and graduated from the Faculty of Law with top marks in 1959. He practiced law after graduating from the Faculty of Law, and was later appointed as a judicial investigator in the Ministry of Justice in 1960. He was made a judge in 1968 after passing a judicial-competency exam with top marks.

He then worked as a legal advisor to the late President Saddam Hussein for three years, then as an advisor to the cabinet of the former regime for several years, and after that as a lecturer at the Saddam University Faculty of Law. While working in the president’s office, Hussein appointed him as a judge in the Court of Cassation, which violated the laws in force at the time. After reaching the age at which judges must legally retire, he obtained an extension and continued to serve, also in violation of the law.

During the 2002 referendum, Mahmoud popularized the phrase “eternal allegiance” regarding Hussein. In an article he wrote for the local newspaper Qadisiyah on Oct. 15, 2002, he coined the famous saying, “The greatest commander for the greatest people.”

After the US invasion of Iraq, Bremer appointed Mahmoud as supervisor of the Ministry of Justice on June 12, 2003.