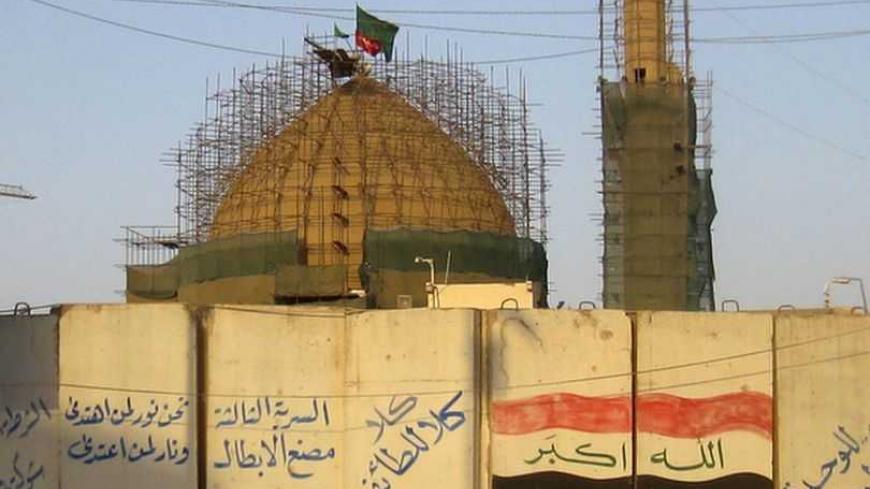 When Iraqi Prime Minister Nouri al-Maliki’s security personnel arrested the bodyguard of the prominent Sunni political leader and Minister of Finance Rafi al-Issawi, sectarian rhetoric was quick to return to the surface, and in its wake emerged conflicting interpretations of the Iraqi political scene. To Iraqis, the arrest of and repeated accusations against prominent members of the al-Iraqiya List — led by Ayad Allawi — is reminiscent of the sectarian fighting of 2005 and 2007.

Is Iraq preparing to descend into a new cycle of sectarian violence?

In 2003, omens began appearing to Iraqi Sunnis portending that their golden era had come to an end. Not least of these was when Sunni army officers were discharged by order of the US commander in Iraq, Paul Bremer, and were later prosecuted by Iraqi courts as part of the de-Baathification process.

After the fall of Saddam Hussein’s regime, Iraq began to gravitate toward the Lebanese model, which bases its democratic foundation on representation along sectarian and ethnic delineations.

Iraqi Sunnis are hesitant to participate in the political process, as evidenced by the fact that millions of them forwent participating in the elections. Sunni political forces preferred instead to ensure their representation by arming themselves in their areas of influence. Many believe the armed resistance against the US presence in Iraq was a reprisal for the Sunnis losing their leadership positions and grasp on power.

On the other hand, Shiites feel that they have been targeted by the Sunnis ever since their ascension to power. They also feel that their “right to assume power due to the majority they represent” is threatened by a sectarian force that is prepared to swap positions at any time and by any means.

The mutual fear reached its peak when sectarian fighting broke out after the bombing of two holy Shiite shrines in the city of Samarra, 118 km north of Baghdad.

The golden dome erected above the shrines of the al-Askariya imams was destroyed by an explosive device in 2006. Both the dome and the minaret were built by the Abbasid Caliph al-Mu'tasim in 835 CE, and were considered among the most prominent monuments in Samarra.

With Islamic Dawa Party leader Maliki’s ascent to power in Iraq, the government was able to improve security and reduce sectarian violence. However, this president, renowned for confronting the armed militias, is still incapable of purging the Iraqi governing system of sectarian rule. However, some claim that he is maintaining it as a fire under the ashes.

During the demonstrations which erupted throughout the Anbar Governorate on Dec. 24, 2012, following the arrest of Issawi’s bodyguard, which were later accompanied by acts of civil disobedience and road blockages by Sunni clans, the incensed demonstrators repeated chants condemning the “targeting of Sunni symbols.” However, the demonstrators did not stop there: They chanted that Maliki would suffer “the same fate as Bashar al-Assad” and that “the coming Iraqi Spring would be brought to Baghdad from Fallujah.”

Immediately following the withdrawal of US troops, Iraqi authorities issued an arrest warrant for Vice President Tariq al-Hashemi, the most prominent Sunni official in Iraq. Hashemi, accused of heading various terrorist cells, was tried in absentia and sentenced to death.

Iraqi Sunni anger at the arrest of a Sunni minister’s bodyguard, a case which may in fact go to trial, is another instance of hostile posturing toward the Shiite majority in the country. However, this majority does not mean the Shiite general public, but rather the Shiite parties which dominate parliament and government positions.

Shiite representatives are keen to protect the gains they have made since 2003. It is difficult, at least for now, to envision any medium-term alternative other than a theocratic regime controlled by Shiite forces. It seems that the new regime is intent on protecting its recent gains.

In contrast, an Iraqi army general who was discharged from service since 2003, who preferred not to be named, said that “many Sunni Iraqis are prepared to tip the balance in their favor, due to the pressure exerted by the government through arbitrary arrests.” He added, “The sectarian conflict in Iraq is not limited to elite circles and political forces which are trying to perpetuate sectarian confrontations [...] The conflict lives in Iraqi homes, and dictates the options available to them.”