There are growing calls in Iraq among the Sunni opposition to annul an article in the Anti-Terrorism Law that Sunnis say discriminates against them, reports Ali Abel Sadah. 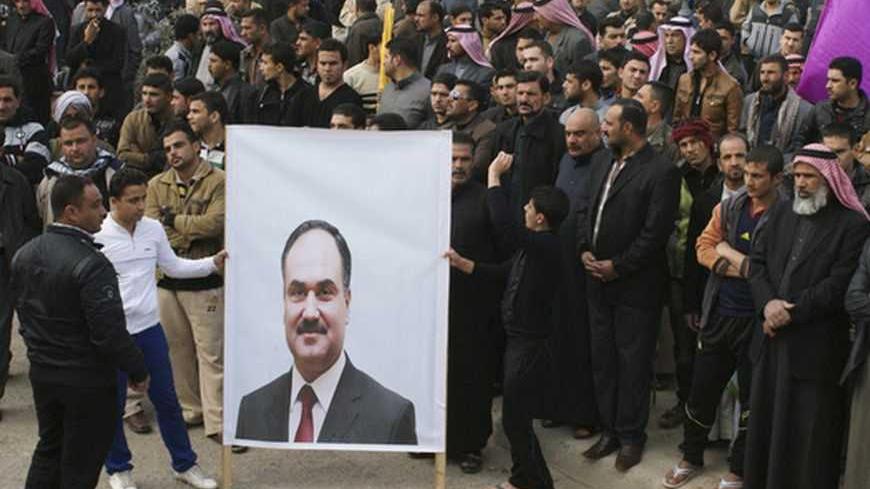 An anti-terrorism provision in Iraq has become the center of a crisis between Prime Minister Nouri al-Maliki and his Sunni opponents after demonstrators in al-Anbar, Nineveh and Samarra renewed demands to annul it.

The Sunnis believe that the implementation of Article 4 of the Anti-Terrorism Law disproportionately harms them. They also see it as a government tool for legally pursuing them and Maliki’s political opponents and enemies.

The Anti-Terrorism Law includes two types of penalties. The first sentences to death "any one who committed, as a main perpetrator or a participant, a terrorist act, along with anyone who incites, plans, finances or assists terrorists to commit such a crime." The second penalty sentences to life imprisonment "any one who intentionally covers up any terrorist act or harbors a terrorist with the purpose of concealment."

For a number of years, Article 4 of the Anti-Terrorism Law has been one of the most widely used articles in the judicial system, since it was approved by the unelected Iraqi National Assembly in 2005. Opponents of this article allege that it is used to target Maliki's political opponents, and that its interpretation is subject to the interests of influential Shiite forces.

Parliament Speaker Osama al-Nujaifi promised to annul Article 4 by offering a legislative amendment. During a press conference in Mosul, a majority Sunni city that has experienced protests against Maliki, Nujaifi referred to the article as "a sword held to the necks of Iraqis.”

Since its passage by the non-elected Iraqi National Assembly in 2005, Article 4 has became the provision most invoked by the judiciary. Those who oppose the article claim that it has been used against Maliki’s political opponents and that its interpretation is skewed toward the interests of powerful Shiite forces.

The parliamentary bloc led by Maliki, however, opposes Nujaifi’s position and has requested that the two sides negotiate about the law.

Ihsan al-Awadi, the Shiite leader of the State of Law coalition, believes that “annulling Article 4 of the Anti-Terrorism Law is a huge risk to Iraq’s security,” despite explicitly admitting that “some individuals in the security system are misusing the law.”

Awadi called on the speaker of parliament to “negotiate with the cabinet” to resolve the dispute over the article and its implementation.

The Shiite parties have defended the anti-terrorism law because they see it as a safety net for stability. They also believe it is an effective weapon for undermining activities by armed militias. Mistakes in application do sometimes occur, but Sunnis do not readily concede this point.

A prominent leader in the Shiite National Alliance, which is close to Maliki, stated on condition of anonymity that “annulling Article 4 of the Anti-Terrorism Law is impossible. This would make us lose our most important judicial pretext to pursue insurgents. We will not do that, but we might reach an understanding to increase cooperation in overseeing the implementation of this article.”

Annulment of the article would render arrest warrants previously issued against Sunni politicians invalid, overturning sentences of life imprisonment and capital punishment. Among the prominent Sunni figures who would be affected is former vice president Tariq al-Hashemi as well as bodyguards of Finance Minister Rafi al-Issawi.

Sunnis are pressing their demands in a way that reveals their negotiating power. It is unlikely, however, that Maliki’s government will annul the article, and the attempts of the speaker to obtain a quorum to address the issue will be resisted. Nonetheless, the growing Sunni protests against Article 4 may compel Maliki to offer concessions in order to ease some of the pressure.

The prime minister, however, does not yet appear ready to engage. In a press release issued by his office, he said that he “is not able to annul laws the parliament has passed, especially the anti-terrorism laws.” In addition, in a warning to the speaker of parliament, Maliki said that “he [Nujaifi] is fully responsible for annulling the law.”

Maliki insisted on abiding by Article 4 since “the government is bound, according to the constitution, to implement the laws enacted by the parliament.”

In a bid to shed light on his ability to work around the Sunnis, Maliki called on opposition coalitions — including the Iraqiyya coalition led by Ayad Allawi — to “propose a draft law to annul the article. If approved, parliament would discuss it.”

The odds are long that the Sunni protesters will manage to have Article 4 annuled, given the disparate opinions in parliament in addition to the fierce refusal of the Shiite National Alliance and the concern of the Kurdish coalition about a security vacuum. “Annulling the article is out of the question. . . . A law should not be passed to invalidate it,” said Shuwan Mohammed Taha, a key leader in the Kurdistan Democratic Party, led by Massoud Barzani.

Taha believes that the obstacle standing in the way of the rightful implementation of the article is related to its interpretation. Taha is concerned that religious, dogmatic parties might have significant influence over the application of Article 4. He asserted, “The interpretation of the term ‘terrorism,’ or ‘terrorists’ for that matter, could be used by the government as a means to suppress the opposition.”

The Kurdish MPs are willing to back an initiative to amend the provisions of the anti-terrorism laws. In addressing the crisis of interpretation, especially those pertaining to security and the military, Taha suggested that the Sunni demands could be a way of fixing the loopholes in the law.

Ali Abel Sadah is a writer and journalist from Baghdad working in both Iraqi and Arab media. He was the editorial manager of a number of local newspapers and a political and cultural reporter for more than 10 years.