As anti-government protests continue in Iraq, questions have arisen over the funding of demonstrations, with some accusing protesters of receiving foreign money, writes Omar al-Shaher. 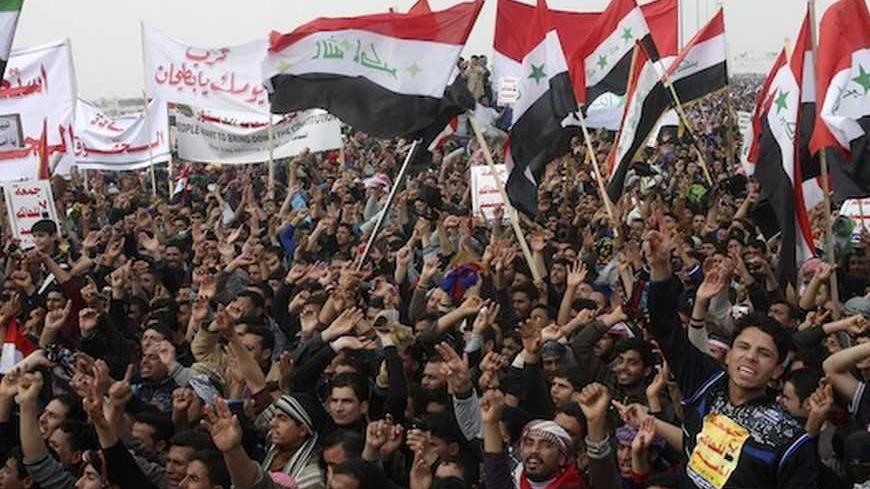 Amid the clamor caused by the ongoing protests in Anbar province in western Iraq, which are nearing their 50th day, demonstrators have pitched huge tents and blocked traffic on the highway linking Iraq to Jordan and Syria. The protest organizers said that the main square was attracting a million people each Friday, including many participants from thousands of miles away, who require food and a place to sleep.

On one such Friday, 200 sheep were slaughtered to provide demonstrators with food. On another Friday, ​​the city of Hit, located 50 miles west of Ramadi, served demonstrators 2,000 dishes of meat and rice for lunch. The demonstration’s organizers said that Friday lunch meals can cost upwards of $60,000.

Qusay Zain, a spokesman for the protest, said that tribal leaders in Ramadi compete to serve lunch to protesters, despite the exorbitant costs. "This time, many tribal leaders in Anbar have taken honorable stances,” he said.

Rich tribal leaders in Ramadi have been involved in trade and commerce over the years, but other, less wealthy tribal leaders have also offered to provide lunch for demonstrators. In some cases, tribal leaders collect a certain amount of money from every member of their tribe over the age of 18 to finance the meals, while others covered the expenses themselves.

When leaders of the Albu Fahd tribe in Ramadi prepared a big lunch banquet for protesters and didn't require members of the tribe to pay, the governor of Anbar, a member of the tribe, was accused of indirectly funding the expenses.

The governor of Anbar is not openly involved in anti-government rallies, and he has been accused of being a close associate of Prime Minister Nouri al-Maliki. Protesters accuse Maliki of marginalizing the Sunni minority, which is a widespread population in the Iraqi province of Anbar.

In the square, conversations can be overheard speculating about funds provided to tribal leaders by Saudi Arabia, the UAE, Qatar and Turkey in order to sustain the protest.

"The fact that 200 sheep were slaughtered in a single day, by tribal leaders in Ramadi, in order to prepare a banquet for 100,000 people raises suspicions,” said one young activist. "They are certainly obtaining funds from abroad.”

In the city of Fallujah, located between Ramadi and Baghdad, an activist said that a tribal leader received funds from a Gulf country to prepare a big banquet for the sit-in. “This tribal leader wanted to prepare a banquet and found that other tribes had reserved their turn for the coming days," he said. "Thus, he paid a bribe to an influential person in the square in order to get an early date.”

Demonstrators in Ramadi mocked this story. “I swear, if Qatar had been providing money to support the protests, I would have taken some of it," said one elderly protester. "Claims about external funding are an attempt to tarnish the reputation of the protest.”

Saeed Lafei, a cleric and one of the most prominent speakers at the square, said that “the Islamic Party is accused of providing the protest with financial support from abroad, which is untrue.”

Demonstrations broke out in Anbar after Iraqi Finance Minister Rafi al-Issawi's bodyguard was arrested. Issawi is a member of the Islamic Party and comes from the city of Fallujah.

Protesters pitched 70 tents at the protest site on both sides of the highway, about 2,000 meters away from Ramadi’s city center, to offer places to sleep and logistical facilities.

“We were paying about $40 for the tent’s daily rent," said Muhannad, an activist at the protest. “We found that absurd, and decided that each group should buy its own tent, which reduced spending. Buying a tent costs us $1,000, which is equal to less than 30 days of rent.”

“Protesters finally agreed to charge each tent $400 per month in order to provide logistical requirements,” Nawfal, a civilian activist. “We need water and power, among other things. We decided to acquire them through standard procedures, after they were previously funded through donations.”

Protesters constructed small bathrooms and opened up stalls to sell snacks, tea and cigarettes. But no figures were available on the sum of money spent during the 47 days of protest.

Protesters stressed that they will continue to sleep on the highway, but they did not answer questions on how the necessary funds to sustain the protest were obtained.