Hezbollah leader Hassan Nasrallah disproved rumors he is sick and delivered a message to Lebanon’s leaders on Syria and the electoral law issue, writes Ali Hashem. 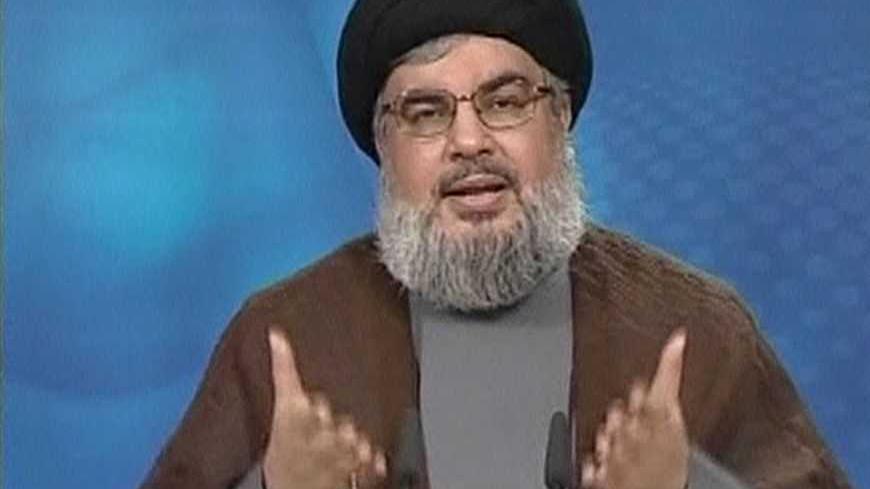 In the course of less than 24 hours, Hezbollah found itself drawn into a media frenzy to refute claims that its secretary general, Hassan Nasrallah, was seriously ill and hospitalized in Iran and that the group's deputy leader, according to a Syrian opposition group, had been injured in an attack along the Lebanon-Syria border.

As murmurs grew louder, and the rumors made their way to the media outlets, many Lebanese began to wonder if Hezbollah was covering up news of these events. The organization soon broke its silence.

"Rumors that have spread in the previous days have led me to make an urgent media appearance to show you that I am in good health," said Hasan Nasrallah on Feb. 27. Addressing his supporters via al-Manar TV, he added, "These rumors are part of a media campaign against Hezbollah."

A similar incident occurred in 2008, when Israeli media reports suggested Nasrallah had been poisoned by a Mossad agent and might be near death. A quick, 10-minute interview with the Hezbollah leader was arranged, again on al-Manar, where he made a statement almost identical to the one on Feb. 27.

For Hezbollah supporters, Nasrallah is not a man to be played with, but "the victorious leader who defeated Israel." Being a sayyed, a descendant of the Prophet Mohammed, adds a touch of holiness to his charisma, and for Nasrallah's followers means that his good health is equivalent to the well-being of the umma (Islamic community).

Nasrallah appeared on al-Manar to let his supporters know that he is safe and sound, as is his deputy, but it was also an opportunity for him to send some additional messages here and there. Perhaps the most important was the one regarding Syria.

Syrian opposition groups have repeatedly accused Hezbollah of interfering in Syrian affairs and fighting alongside the regime. On several occasions Hezbollah has stated that members of the organization from villages inside Syria have had to defend their homes and land. On Feb. 16, three members of the Lebanese Shiite organization were killed in clashes on the Lebanon-Syria border.

Nasrallah, in his al-Manar appearance, was clearer than he had been previously in addressing his party's role in Syria. He declared that the Syrian civil war is not a conflict the party as a whole is fighting, but at the same time acknowledged that members of the organization living in majority Lebanese Shiite villages in Syria have been involved.

According to Nasrallah, “Villages inhabited by Shiite Lebanese were attacked by Syrian opposition fighters," noting that the Syrians had forced villagers from their homes, which were then burned along with their crops. He said that "those who remained have armed and defended themselves, their houses, and their fields.”

The Free Syrian Army has made it known that it will retaliate whenever Hezbollah members fire on its fighters. This is the same sentiment conveyed by Nasrallah when he spoke on al-Manar of "armed Lebanese villagers inside Syria," saying that “they have the right to defend themselves, and whoever is killed in the battles is considered a martyr."

Nasrallah's message to the Lebanese government was one of criticism for not attempting to help the 30,000 Lebanese living in Syria who are facing what he called "sectarian cleansing,” noting that it had not even appealed to countries that support the opposition, among them Qatar, Saudi Arabia, Turkey, and the United States. Addressing the Lebanese Shiites in Syria, he proclaimed, “I tell everyone there that you have the legitimate right of self-defense, but the other civilians, regardless of their sect and political stances, are off limits.”

Nasrallah also offered his thoughts on the upcoming elections and electoral law, including the proposed "Orthodox Gathering" law endorsed by Christian political parties and the March 8 Alliance. On the Orthodox law, which would restrict Lebanese to only voting for candidates from their particular sect, Nasrallah noted the opinions of concern and adamant opposition that he had heard in discussions with political parties about it. He then asserted, "There is an alternative that my allies and I will work hard on: Lebanon as one constituency and voting that will be proportional and ensure equality."

The Hezbollah leader explained that he supports Muslims and Christians voting to elect 128 MPs, equally divided between the two groups. "This will decrease extremism, and proportionality will allow for everyone to be represented in the government," he said. Nasrallah then added, "There exist internal and foreign forces working hard on delaying the elections but no one has the courage to say it out loud."

Hezbollah's opponents, mainly the Future Movement, oppose the Orthodox law, as does President Michel Suleiman, Prime Minister Najib Mikati, and Druze leader and MP Walid Jumblatt. They believe such a law will further deepen the sectarian divide in the country.

Nasrallah knows that his one constituency, proportional vote position faces stiff opposition. Many of his opponents fear that if adopted, the one constituency law will mean victory for Hezbollah and its allies in the next election. In this light, the Orthodox law might be the better choice, or parliamentary elections might have to wait.

Ali Hashem is an Arab journalist serving as the Al Mayadeen news network's chief correspondent. Until March 2012, he was an Al Jazeera war correspondent and prior to that a senior journalist at the BBC.