Lebanon's banks to pay price of sanctions on Hezbollah 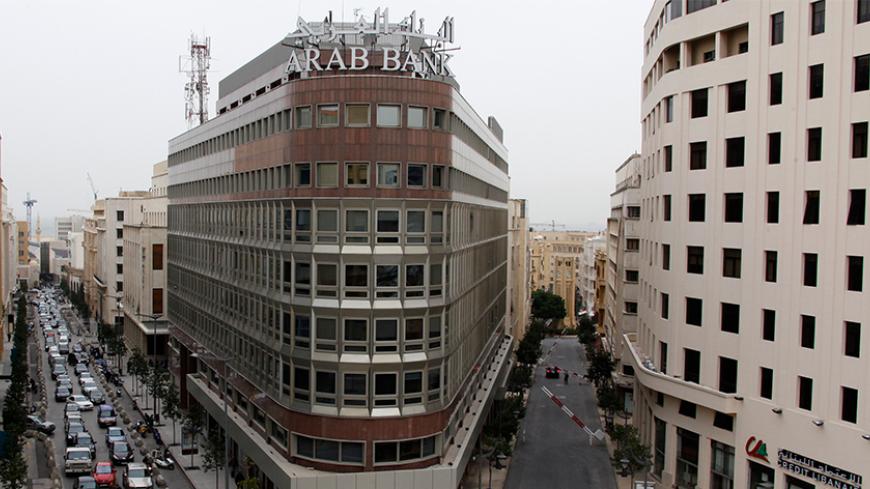 Several challenges lie ahead for the Lebanese banking sector this year. An economic crisis is plaguing the region and the Syrian war is affecting stability in Lebanon. Now, the country finds itself squeezed between the hammer of the United States, which is calling for further banking restrictions, and the anvil of Hezbollah, which does not want the country to comply with US financial authorities’ instructions.

On Dec. 18, US President Barack Obama signed the Hizballah International Financing Prevention Act, which was submitted by Edward Royce, chairman of the House Foreign Affairs Committee. The law aims to expand economic sanctions on Lebanese Hezbollah and its Lebanese Al-Manar TV channel to prevent the party from access to banks and inhibit its financial operations.

This law was preceded by many other decisions designed to tighten the noose around Hezbollah’s neck and block it from the global banking system. A law passed in 2014 aims to cut off funding for Hezbollah gained through criminal activities. The United States classified Hezbollah as a terrorist organization in 1995.

This decision comes into force while Western diplomats are expecting the United States to lift economic sanctions on Hezbollah’s supporter Iran in the first three months of this year as part of the nuclear deal signed in July.

Unlike previous decisions, the recent congressional sanctions on Hezbollah apply to individuals and institutions not subject to US jurisdiction, and it classifies the party as a criminal organization, not just a terrorist organization. In other words, Hezbollah and its members could be charged with crimes such as drug trafficking and money laundering.

Lawyer Paul Morcos, executive coordinator of the Legislative Observatory in Lebanon, told Al-Monitor the new law “confirmed all of the previous US decisions regarding Hezbollah, but it did not add new tools."

"It stepped up pressure on the Lebanese banks and the Central Bank of Lebanon," he said. "It also set the stage for larger accountability before the US Congress,” as Lebanese banks could be blacklisted or subjected to direct sanctions.

Morcos added that the most efficient sanctions will probably be the ones against Hezbollah's Al-Manar TV, since the party already "refrains from opening bank accounts in its name or in the name of cadres included on US terror lists.”

Entities that deal with Al-Manar will be affected, as US official and non-official institutions will refrain from dealing with them. Those institutions include US correspondent banks that do business with Lebanese banks. Meanwhile, the sanctions also could lead individuals dealing with Al-Manar to be included on the US blacklist. On Jan. 7, the US Treasury Department sanctioned Ali Youssef Charara, chairman of Spectrum Investment Group Holding, for having provided financial support to Hezbollah.

The Lebanese parliament — despite the constitutional vacuum left by the presidential vacancy since May 2014 — has managed to vote on a set of laws needed to combat money laundering. The parliament ratified a treaty developed in 1999 to fight money laundering and terrorist financing.

Joseph Torbey, chairman of the Association of Banks in Lebanon, said in a Dec. 19 press conference, “The most important effects of this new legislation is that no investment or wealth will escape Lebanon.” He added, “Lebanon will have achieved what was required of it internationally,” which is to comply with international regulations through the 1999 Anti-Money Laundering Act.

More importantly, this new legislation partially lifts the secrecy that had long characterized the Lebanese banking system, as it allows countries to obtain information about people or companies suspected of money laundering.

The day after the assassination of one of Hezbollah's senior leaders, Samir Kuntar, Hezbollah Secretary-General Hassan Nasrallah made a televised speech to comment on the incident. Despite its importance, Kuntar’s assassination remarkably failed to overshadow the sanctions issue. On the contrary, most of the Dec. 21 speech was about the sanctions.

According to Nasrallah, the sanctions are part of a scheme to tarnish the party's image. He also stressed that the party does not conduct trade or investment operations in Lebanese banks and that it has no money deposited in those banks. He said that under the recent legislation, the United States, “whenever it wishes to target a specific environment, friends of a certain political line or a particular movement, can send a list of names of individuals or companies” to prohibit Lebanese banks from dealing with them.

Nasrallah called on Lebanese banks to “assume the responsibility of protecting Lebanese citizens” as he highlighted the need for the Lebanese government and banks to show some “sovereignty” in this regard.

This puts Lebanese banks under further pressure when they are already facing the repercussions of a slowdown in the Lebanese economy and the effects of regional crises on political and economic stability. This situation recently prompted some international rating agencies, such as Standard & Poor’s, to affirm Lebanon’s sovereign credit rating at “B-/B” and downgrade its long-range outlook from “stable” to “negative.”

The downgrade was the last thing the banking sector needed. Focusing on sanctions will first and foremost affect the Lebanese economy and banking sector. It is no secret that the banking industry, like many others, chiefly relies on trust. Therefore, focusing on sanctions — especially when Lebanese banks have complied with international regulations — or lecturing Lebanese banks about international requirements will not help build confidence in the country's economy and its institutions under critical conditions. This fact ought to be raised to the conflicting parties both in the region and in the related Lebanese economic arena.