The village of Yanoun, where the population has been reduced to 59, may be the most threatened village in the West Bank, writes Linah Alsaafin. 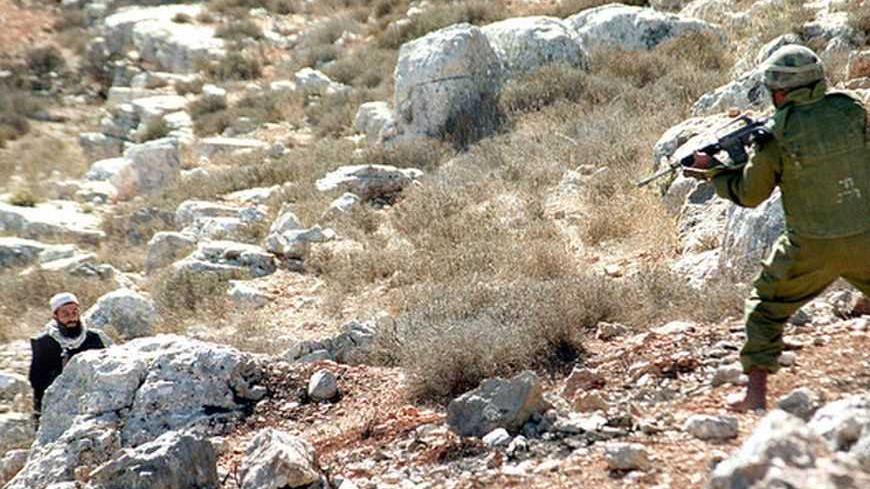 An Israeli soldier aims his weapon at a Palestinian man after clashes broke out during a violent Palestinian demonstration against the expansion of the nearby Jewish settlement of Itamar, Dec. 3, 1999. - REUTERS

Just 15 kilometers southeast from the city of Nablus lies an ancient village nestled between the great mountains and hills common to the area.

“Yanoun,” says Hamza Derieh, a young local activist from the neighboring village of Aqraba, “was known by its Caanite name Ya Nuha, which means 'calm and serenity.' Its Roman name was Yano.”

“Unfortunately, the Israeli occupation and the Jewish settlers have turned this village from its meaning of calm and serenity to chaos and discord,” he went on.

Hamza spent most of his time gathering information about the nearby villages for his research book, and was driven even more when no academic institution or official organization supported him in his work.

The village of Yanoun rests on 16,450 dunums, but the ever-encroaching illegal Jewish settlement of Itamar has taken over the majority of the land — 80% of it. Ten percent is completely inaccessible by the villagers, while the remaining 10% can only be accessed by special permits from the Israeli military.

The surrounding hilltops belonging to the adjoining villages of Awarta, Aqraba and Beit Furik have all been stolen from the Palestinians for the expansion of Itamar, which the Israeli government plans on connecting to the other illegal settlements of Maale Ephraim and Gittit in the Jordan Valley.

“Every dunum in Yanoun has land deeds,” Hamza said. “Ninety percent of Yanoun’s land is owned by the Bushnaq family, while 10% is owned by several families from Nablus.”

The Bushnaq family, originally from Bosnia and Herzegovina, came to Palestine during the Ottoman Empire years. Today, they are scattered throughout the world, mostly in North America, with a few families living in Nablus. For this reason, in addition to their multiplying numbers, it has been impossible to produce the land deeds from the Bushnaqs.

In 2001, residents of Yanoun began moving to Aqraba as Jewish settlers harassed them in their daily lives.

Yousef Derieh, a member of the Aqraba village council and local popular resistance committee, described how the settlers would raid the village in the middle of the night, terrorizing the women and children.

“The settlers would hold an M-16 rifle to head of Palestinian children as they were sleeping,” he relayed. “And in broad daylight, they would kidnap a child for a few hours, threatening and warning him that they would kill his father and mother and siblings.”

As a result, the population of Yanoun dwindled drastically from a few hundred to mere dozens. Most of the villagers fled to Aqraba, leaving behind their homes.

“A young man who wants to marry needs a separate house of his own, but since the Israeli authorities forbid the building of any structure on our land, he is forced to leave Yanoun,” added Yousef.

The buildings left are derelict structures, the homes of the Bushnaqs built during the Ottoman era. The village mosque, known for its mosaic flooring dating back hundreds of years, was the only building allowed to be renovated after it was abandoned for a century.

Aqraba has become something of a permanent extension of Yanoun, whose villagers attend Friday prayers in the mosque in Aqraba due to the low number of people. The children also go to school in Aqraba after a Japanese NGO donated a bus to take them back and forth.

The majority of the Yanoun villagers are farmers and shepherds who depend on agriculture for their livelihoods.

“It’s very rare for someone to have a university degree and to be an employee here,” affirmed Yousef.

Riyad Hasan Bani Jaber, a shepherd from Aqraba, explains how difficult he finds it to harvest his own land, part of which he owns in Yanoun.

“I only get a permit from the army to tend to my olive trees sporadically,” he said. “We always fear the settlers, who can watch us from the hilltops and usually attack us. The army always protects the settlers and watch them as they attack.”

Riyad, or Abu Ahmad as he is also known, points to the natural spring in the village, the main source of water for the residents.

“We can’t use this water anymore,” he said. “The settlers came and kept bathing in the spring. This is the water we drink, and now we can’t because it is sullied.”

Yanoun is split into two parts: the lower part is in Area B, land designated by the Oslo Accords as being under the civil control of the Palestinian Authority and under Israeli security rule, while the upper part is in Area C, under full Israeli civil and military control, which bans the building of any Palestinian structures.

A few years ago, international activists from the EAPPI, the Ecumenical Accompaniment Program in Palestine and Israel, moved in to Yanoun to document and protect the villagers from settler attacks.

Abu il-Izz, the coordinator of the international solidarity movement in Yanoun, says that the only people left in the village are four brothers and their families.

“We are 59 people in total,” he emphasized. “We have six internationals, each from a different country, who are staying with us, which brings the population to 65. We can be attacked by the settlers at any moment, who can run us out of our homes in upper Yanoun, and there still wouldn’t be any coverage of our situation.”

“Yanoun is the most threatened village in the West Bank, and no one has heard of it,” continued Abu il-Izz. “It’s sad to say that any form of solidarity or support has come from international activists, not Palestinian. The Palestinian Authority has never visited us before. The first organization to help the people of Yanoun in Aqraba to go back to their homes was an Israeli one called Ta’ayush.”

“We want to remain on our land,” Abu il-Izz said, “but it’s getting harder and harder for us to live a decent life here.”