To get an education, the students in Yanoun, a Palestinian village near Nablus, must deal with attacks by Israeli settlers on the way to school and even in their homes. 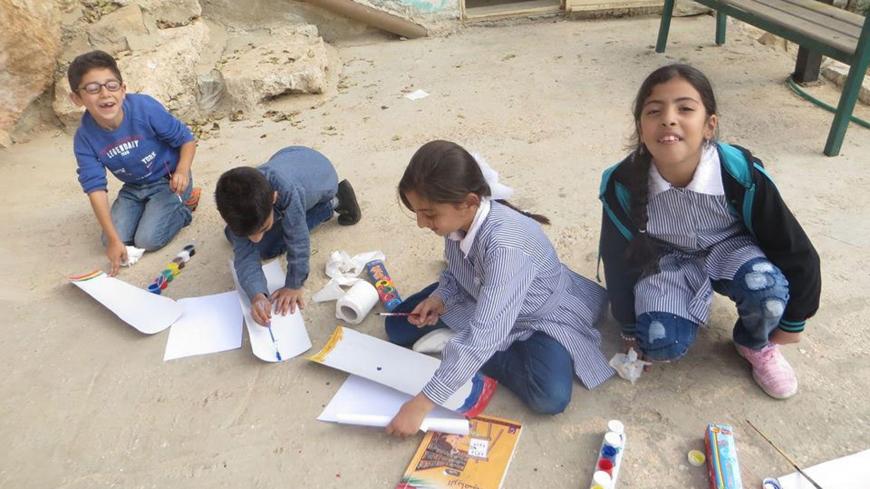 Yanoun, Nablus — “Knowledge is light and ignorance is darkness,” says the writing on one of the walls of Yanoun Primary School. Given the school’s dismal physical condition — rundown, damaged walls, rickety tin roof and lack of a playground — the words would seem to provide little comfort to its students or teachers, but they take solace in being able to learn and teach within the school's four walls.

The co-educational school, affiliated with the Palestinian Ministry of Education and Higher Education, is located in the West Bank village of Yanoun, in southeastern Nablus governorate. As it is in Area C, Israel has full administrative and security authority over the area based on the Oslo II Accord (1995). This means that the school must obtain permission from Israeli authorities to make renovations, something they have never been granted.

Although the village takes its name from the Canaanite word for “calm” or “serene,” life in Yanoun has been anything but. Situated amid five Israeli settlements — Gedonim, Givat ‘Alam and settlements 777, 776 and 778 —Yanoun has had to battle for survival.

In 2002, Yanoun residents had to flee their homes after residents of the nearby Israeli settlements entered the village, beat them and killed their animals. Some returned a few years later with the assistance of peace activists from the volunteer organization Ta’ayush and the International Solidarity Movement, but security, and economic, problems continued.

Rashed Morar, head of the village, told Al-Monitor, “Israel took over 80% of the village's agricultural lands. Yanoun residents can access 10% [of those] lands after obtaining prior licenses from the occupation authorities, because they are close to Israeli settlements, and the remaining 10% is the area where Yanoun residents live and conduct their agricultural and sheep-raising activities.”

Six families, all together 36 villagers, reside on 16,450 dunums, where they farm and raise livestock to make a living, Morar said. He also noted that the village lacks communications and transportation networks. “There are no health centers or hospitals in the village,” he remarked.

The lack of infrastructure and other hardships has forced some of the families to move. Ayman Abu Shehab, the school principal, told Al-Monitor that the building housing Yanoun Primary is a repurposed house whose owners immigrated to Aqraba. “Fourteen students — eight girls and six boys — receive basic education from first to sixth grade,” he said.

The school's faculty consists of six teachers and one administration worker. Six teachers ensure that the 14 students are taught the full curricula, including Arabic and English, mathematics, religion and science. Once the children complete their basic education, they transfer to schools in Aqraba, two and a half miles from Yanoun. A bus donated in 2012 by UNICEF, the United Nations Children's Fund, helps transport students between the village and Aqraba. Efforts to expand the school to allow students to continue their education in their village have been futile.

“The Israeli authorities refuse to allow us to renovate, let alone expand, the school,” Abu Shehab said. “They would not even let us put in some shades or umbrellas to protect the kids from rain and sun.”

That's not all that's forbidden. “We cannot raise the flag of Palestine since the school is surrounded by Israeli settlements,” said the principal. “We cannot play the national anthem in the mornings in the schoolyard; we have to do it inside the school, and we keep the volume down. We fear that the settlers will attack the teachers and students.”

Despite such precautions, the settlers harass students from central and southern Yanoun on their way to school in the northern part of the village, the residents said.

“Most students take unpaved roads to reach their school to avoid settlers, and then they meet Israeli soldiers, who also harass them,” said Abu Shehab. “Some of the teachers have to drive the students in their own cars to avoid any harm coming to them.”

Abeer, 11, remarked, “I live in constant fear that the Israeli army and settlers will storm my school and attack us. We run a risk each time we come here. Settlers unleash dogs on us on our way to school. I try to run fast to escape them.”

Another student, Salim, 10, has not always been able to escape the dogs, showing Al-Monitor the scars on his hands and face where one of them, set on him by a settler, had bitten him. “I have to take rough and dangerous roads because I am afraid of settlers beating me up if I come up the regular path,” he said.

Salim was also attacked several times by settlers who stormed his house, assaulting him and his family with sticks and stones. “I am afraid of settlers coming back to get me again,” said Salim, his voice a whisper.

For now, both teachers and students are thankful that their school remains in operation and has not been demolished by the Israelis or closed on the grounds of having too few students. “I am happy to have a school even if it does not have a sports hall or an art room,” Abeer remarked.