Mustafa Al-Khadimi writes that the problems in Iraq are not solely caused by Iraqi Prime Minister Nouri Al-Maliki, but instead reveal the shortcomings of the entire Iraqi political process. 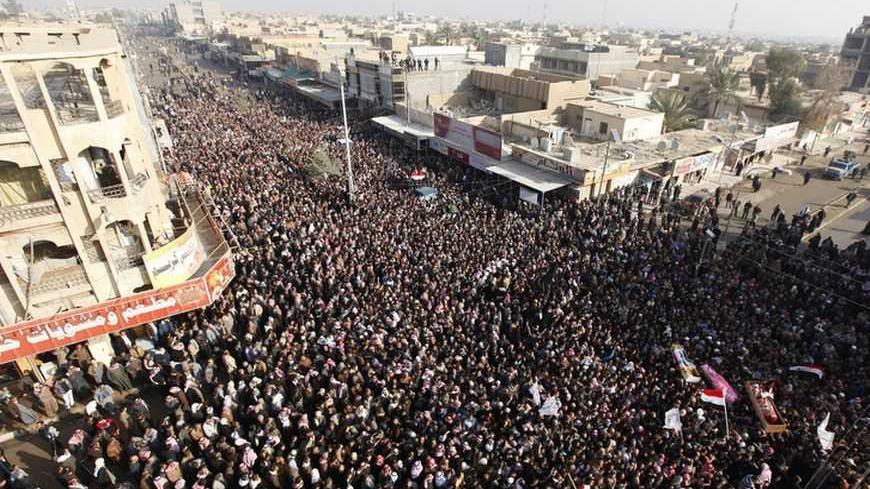 This is not the first time that Prime Minister Nouri al-Maliki has been accused of being a dictator. For more than a year, senior politicians have been leveling this charge, long before it ever rung out as the defining chant of the demonstrations in Anbar and other Sunni cities.

Assessing the interplay of accusations between Iraqi political parties is a highly sensitive task. It must be approached cautiously and credibility must be granted sparingly due to the escalation in the nature of the accusations, having started with corruption, terrorism and subordination to foreign countries, and ending with dictatorship.

The latter charge is never leveled independent of the other accusations. This reveals a systematic flaw inherent in the Iraqi state structure which facilitates this interchange of accusations and in turn could lead to major crises.

The mistakes, which first plagued the establishment of the political system in Iraq in 2003, are part of a century-long legacy of mismanagement in Iraq. It is a burdensome legacy whose blunders, stumbles, and uncertainties culminated in Maliki assuming executive powers in 2006. This occurred in tumultuous circumstances when large areas of Iraq were under the sway of al-Qaeda or armed militias, not to mention the U.S. military presence and the vagaries accompanying its operations in Iraq that year.

These are certainly not justifications condoning that Maliki built a monopoly of power. Rather they can be a helpful standpoint from which to interpret the shortcomings of the Iraqi political reality, and to answer questions surrounding the role of Maliki in creating these flaws.

While Maliki succeeded in subjecting Iraq to the powers of the state by striking at al-Qaeda and the disparate militias between 2007 and 2009 in an operation dubbed Charge of the Knights, the parliament of Iraq was hapless in confronting the task of building the state, which required resolving more than 100 essential pieces of pending legislation.

At that time, the political center was preoccupied with disagreements that distracted it from the dangers of leaving the country without a legal framework to regulate the functions of its institutions.

Thus the Iraqi parliament neglected to pass laws governing the security forces and the army, failing to even heed the importance and gravity of these laws. This legal void led to accusations of Maliki monopolizing power with military resolutions, which have escalated more recently to accusations of a more serious nature. Maliki’s political associates have pleaded their non-involvement regarding Maliki’s expansion of power, despite the fact that they represent the majority in both parliament and government.

This reality expands beyond military regulations to many other functions of the state, which Maliki has also in turn been accused of monopolizing. Regardless of the credibility of these charges, the pivotal question is: Why were those functions of the state left undefined in the first place?

The political groups leveling the accusations of dictatorship in fact comprise 80% of the cabinet, and about 60% of the seats in parliament. Thus they are not only capable of passing the missing legislation, but of implementing it as well.

The recent demonstrations in Anbar are widely considered to be directed at Maliki personally, and various groups are attempting to promote it in this light. Yet the true definition of the nature of these demonstrations is that they are directed towards the shortcomings of the political process, and towards the Iraqi politicians who bear a shared responsibility for these flaws.

In dealing with the recent demonstrations, the executive authority, with Maliki at its helm, has shown its detemination to remain in power and has warned against targeting it, as happened in the assassination of Sunni leader Aifan al-Issawi near the demonstrations in Anbar.

Much has been said about the nonpartisan committees’ proposals that would meet the demands of the demonstrators, and which the executive powers could implement. Yet after more than a month since the demonstrations started, the Iraqi parliament has not succeed in passing any suspended or pending law that would hint that a breakthrough is near.