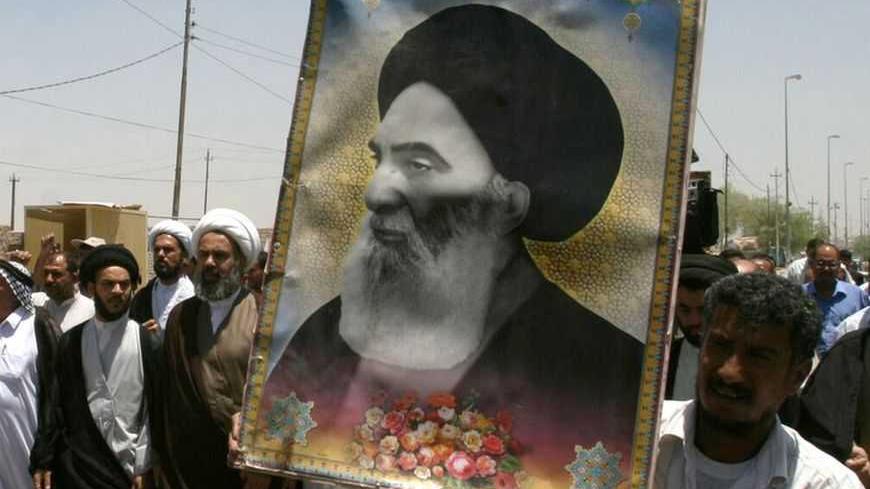 Iraqi politicians — whether Shiites, Sunnis or Kurds — have for years tried to drag supreme Shiite cleric Ali al-Sistani into their ongoing political conflicts. To this day, certain parties have not grown tired in their efforts, through any means possible, to bridge the wide gap between the prevailing view in Najaf — based on religious figures maintaining distance from politics — and the prevailing theory in the Iranian city of Qom — based on religious figures assuming political roles.

However, Sistani — a charismatic man who adheres to a near-obsolete legacy that is hard to change —  resisted, and is resisting, all of these attempts. He is doing so not only out of an ascetic desire to abstain from politics and power, but also to protect millions of his Shiite followers throughout the world from the effects of severing the thin line between the religious Shiite figure and the political leader.

Sistani recently issued a serious of highly significant recommendations through his representative in Karbala regarding the crisis represented by the Sunni demonstrations in Iraq. He said that he is calling for a "civil state," based on respect for the law and the constitution, human rights, and equality.

This supreme Islamic religious figure did not talk about a "religious state," nor did he fill his speech to politicians and the public with religious expressions, Quranic verses, or sayings from the prophet. Rather, with clarity and in a language understood throughout the world, he called for "a civil state."

This understanding not only means that Sistani deeply understands the movements within Islamic communities, and their diversity and conflicting visions regarding a "religious state" and its limits, but that he — like most senior Islamic clerics throughout history — fundamentally looks at society and the role of religion as an interactive, not unilateral, relationship. It was this vision that has allowed the Shiite sect to adapt to ongoing political and historical developments throughout history. And it is this same vision that allowed religion, and its position vis-à-vis politics, to be based on the idea of independence, not dependency or hostility.

Sistani's vision differs from that of many Shiite religious and political leaders. Some of them still maintain the dream that the religious authorities will one day take charge of the premiership, while Sistani views religion as something symbolic of history, place and time, more than a governmental function.

A few days ago, Sistani met with the representative of the Secretary-General of the United Nations in Baghdad, Martin Kobler, and discussed with him the crisis relating to the demonstrations. The two men agreed on a road map that must be adopted to solve this crisis.

This meeting comes following a period of nearly three years in which Sistani had closed the door to Iraqi politicians. He did so as a result of his displeasure at their performance, and to force them to practice politics away from any religious or sectarian influence. He wanted politics to be practiced as "job" not as a "religious mission." Yet when the crisis reached a dangerous level, Sistani had no choice but to clarify his understanding of the state. He views the state as a "civil" entity in which there is no difference between Shiites, Sunnis and Kurds, except at the ballot boxes. It is a state of "law," where a modern constitution is harmonious with human rights; democracy is the basis, the judiciary rules. It is a "peaceful" state, meaning respect for international rules and law and discipline within the parameters of international peace and security.