The role of Iraqi Deputy Prime Minister Hussain al-Shahristani in the release of dozens of prisoners has raised questions about both the Iraqi courts and the reasons for the release, writes Mushreq Abbas. 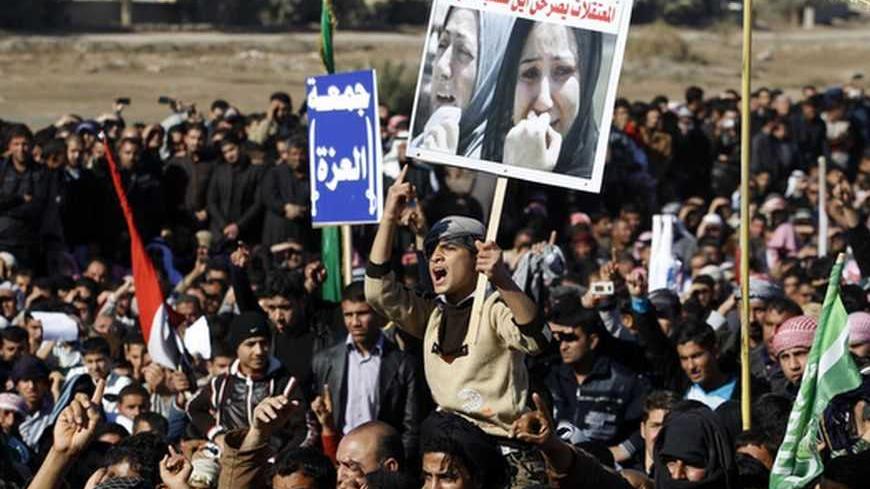 Since the start of the current year, Iraqi Deputy Prime Minister for Energy Hussain al-Shahristani has led a campaign to release dozens of detainees from prison, claiming that they are innocent. The government hopes that this move will help abate the ongoing Sunni protests rocking Anbar Province and elsewhere. Clerics previously took similar action when they, under the name of the Committee of Wise Men, released female prisoners from jail.

On Dec. 31, 2012, the Iraqi government formed a committee comprised of Sunni clerics — including Sheikh Abdul Mahdi al-Sumaidaie (belonging to the Salafist trend), Khaled al-Mulla (a Sunni cleric who ran in the 2010 parliamentary elections as part of the Shiite National Alliance bloc) and Iraqi Minister of Justice Hassan al-Shammari — to investigate the conditions of female prisoners and to release them from prison. On Jan. 23, this committee announced the release of 91 female prisoners, among 900 currently being held.

Demonstrations began in Iraq's Anbar province on Dec. 23 of last year, with protesters initially calling for the release of female prisoners after reports came out that female prisoners had been raped while in detention.

On Jan. 8 of this year, in light of escalating demands on the part of protesters, Iraqi Prime Minister Nouri al-Maliki ordered the formation of a committee comprised of seven ministers headed by Shahristani to investigate the files of all detainees.

On Jan. 20 2013, Shahristani himself said that his committee had already released 300 prisoners and that they were studying thousands of others' cases to assess the legal status of the detainees.

While no one is criticizing the Iraqi authorities for attempting to assuage the grievances of the protesters in Anbar, the release of prisoners raises three fundamental questions:

Such is the chaos and lack of transparency that prevails over the Iraqi state. The absence of transparency places acute pressure on the issue of detainees and imprisoned convicts.

Despite the fact that the Iraqi Justice Ministry announced in the middle of 2012 that its prisons contain 28,000 detainees, this information does not provide a final tally of all Iraqi detainees, since the Ministries of the Interior and Defense did not announce the number of those held in prisons under their control. According to some, such as Iraqiyya List MP Liqa al-Wardi, the total number of detainees is as high as 97,000. Reports issued by Iraqi opposition parties, such as the Association of Muslim Scholars and a number of militant groups, indicate there are more than 120,000 detainees.

In a report issued in September 2010, Amnesty International estimated that 30,000 Iraqis had been detained without trial, but did not specify a number of total detainees.

The current Iraqi government is in no way to blame for this murky situation. During their occupation of Iraq from 2003 to 2012, US forces needed a cover to allow them to detain tens of thousands of Iraqis without trial. The Anti-Terrorism Act gave them the legal flexibility needed to transfer persons they had detained to the Iraqi government while retaining the desired level of secrecy and concealing the true number of detainees.

The Iraqi judiciary is officially charged with resolving the status of the detainees, whether they were first detained by US forces or more recently by the Iraqi government. And the simple fact is that this branch of government has fallen into disrepair.

The Iraqi judiciary is accused of being submissive to the political authorities — headed by Maliki — and these accusations are coming from influential political parties such as the Iraqiyya list, the Sadrist Movement and the Kurdish Alliance. In mid-2012, these parties demanded an end to the politicization of the judiciary under the terms of the Erbil Declaration, which aimed to resolve the political crisis, and demanded that the judiciary permit these releases without legal pretext or basis.

When faced with complaints about the thousands of innocents imprisoned and allegations of using torture to extract confessions, the executive powers claim they have no authority over the courts. However, recent events have laid bare the fact that there are copious numbers of detainees who deserve release, and yet the courts have done nothing to facilitate this.

In a report issued by the United Nations envoy in Iraq on Dec. 19, 2012, the UN expressed its grave concerns regarding the standards of justice being applied in the Iraqi judiciary. They have criticized the fact that Iraq issued 120 death sentences in 2012. However, for the first time, they concentrated most of their attention and censure on the fact that many defendants were convicted with only their confessions as the sole piece of corroborating evidence.

The Iraqi political class’s viewpoint on this international assessment aside, the present Iraqi judiciary has been brought into disrepute. As a constitutionally independent power, it must take the necessary reformative measures to ensure that it is truly independent, and thus refute the accusations marring it.

Legally speaking, the Federal Court and the Supreme Judicial Council, which have stumbled on indecisively for years, hold the potential to be bodies through which this reform is achieved. Political interference will, however, continue to raise many questions.