Transitional Justice in Iraq Is Anything But

Transitional justice in Iraq has been a front for political score-settling and vengeance and that must change, writes Mushreq Abbas. 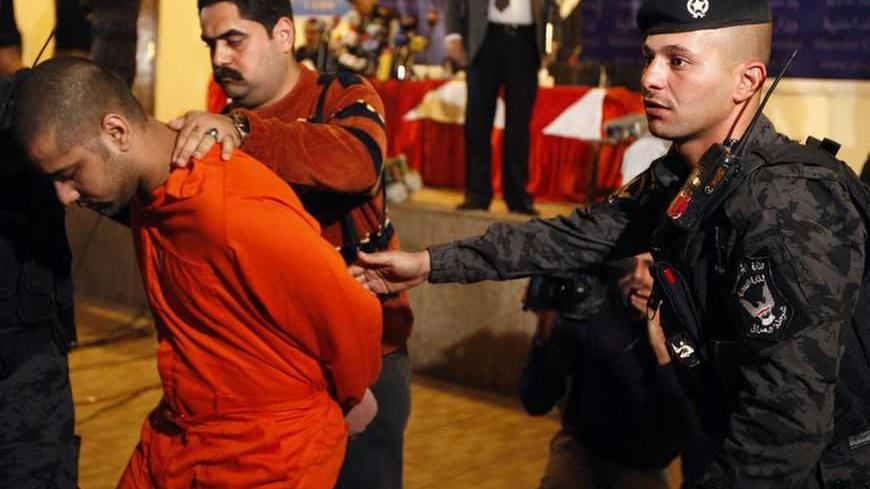 A suspected al-Qaeda militant, scheduled for trial, is taken away by Iraqi police after a presentation to reporters at the Interior Ministry in Baghdad, Nov. 21, 2011. - REUTERS/Saad Shalash

In Iraq, the concept of “transitional justice” was always defined as a tool to settle pre-2003 scores. The Iraqi government’s decision to terminate the Criminal Court, which specialized in trying members of the former regime, may have been an indication that this transitional justice phase had run its course, and of a shift towards a “state of law.” In fact, Iraqi Prime Minister Nouri al-Maliki made the latter term the title of his electoral bloc so as to indicate this shift.

But the reality on the ground differs, not only in regards to the purging of former regime members, but in regards to the need for transitional justice in order to counteract the legacy of violence and political, social and institutional turmoil that followed in the regime’s wake.

The duplicitous and selective application of the term “violence” is no less misleading. This duplicity feeds into ever more political unrest and lapses in security that have placed Iraq right on the edge of the abyss.

In 2012, Iraq witnessed deepening divisions against a backdrop of numerous indictments handed out to senior Sunni leaders such as Vice President Tariq al-Hashemi and Minister of Finance Rafi al-Issawi. Other Sunni Arab leaders have already faced similar charges, making the list of fugitives who have fled to Iraq's neighboring countries in order to escape charges of terrorism quite long.

One could surmise that initially the rationale explaining the existence of this list would be, “Sunni Arabs in Iraq were the most prominent opponents to ousting the regime of Saddam Hussein, and their regions turned into hotbeds for violent, armed groups leading them to al-Qaeda.”

But this reading of events requires much deliberation before settling on its credibility. The first topic to be discussed must be the differences between the two violent phases in Iraq, despite that they overlapped with one another between 2003 and 2012.

At the conceptual level, the activities of the various armed groups operational in Iraq were characterized as “the resistance against the U.S. occupation.” This definition did not only apply to the Sunni community, which embraced armed groups such as al-Qaeda, the Islamic Army, the Mujahideen Army, the 1920 Revolution Brigade and Hamas Iraq, but also included Shiite groups such as the Mahdi Army (led by Shiite cleric Muqtada al-Sadr), the League of the Righteous (Asa’ib Ahl al-Haq), and the Hezbollah Brigades, in addition to armed Kurdish groups with links to al-Qaeda, such as Ansar al-Islam and Ansar al-Sunnah.

All of those armed groups were associated with known political leaders. In fact, we could go as far as to say that no armed group could operate without some form of political backing.

However after 2006 and the outbreak of civil war, a fundamental shift emerged; those same groups had transformed into tools of the sectarian war. They murdered and displaced, killing tens of thousands of Iraqis. Even today, some of the repercussions from the activities of these groups are still present in sectarian score-settling.

The overlap between “resisting occupation” and “sectarian killings” effectively reshuffled the deck.

Returning to the root of the term justice, Iraqi law was somewhat confused with how to deal with the legal definition which could solve this conceptual crisis. Even at present, Iraqis do not know whether using weapons against U.S. forces between 2003 and 2012 was a criminal offense or not. The American administration did not invest much effort in this matter because of the volatile nature and general lack of law and order which accompanied this troubled occupation.

It is no coincidence that Sunni leaders residing in Turkey and sentenced to death in absentia on charges of murder, such as Hashemi, have prompted the Iraqi government to declare Ankara’s provision of sanctuary an international crime, whereas other persons with ties to the sectarian war, such as Abu Deraa, have resided in Tehran for years without causing any diplomatic strife with Iran.

Exploring this argument will not lead to a clear conclusion, for it was never intended to distinguish those who took part in the civil war from those who abstained. If this were the case, it would be difficult to find one Iraqi politician who had not participated in one form or another. Moreover, this categorization overlooks the victims of the civil war and of the violence in Iraq from different denominational backgrounds.

The actual basis for overcoming the legal and conceptual crises in Iraq’s political rhetoric lies in declaring a new phase of transitional justice, committed to bringing closure to the period between 2003 and 2012 as a whole. Its defective legal definitions and conceptual bases, which spread confusion at the local, regional and international levels regarding its position towards the U.S. armed forces, must be remedied.

Adopting the concept of transitional justice could have been the most effective government initiative following the American withdrawal from Iraq. This is especially the case when we understand that “justice” is not merely the indiscriminate pursuit of criminals, but is rather a gateway to widespread social and political compromise which could help end the frustration and distrust plaguing the country.

This article was translated by James Spencer.