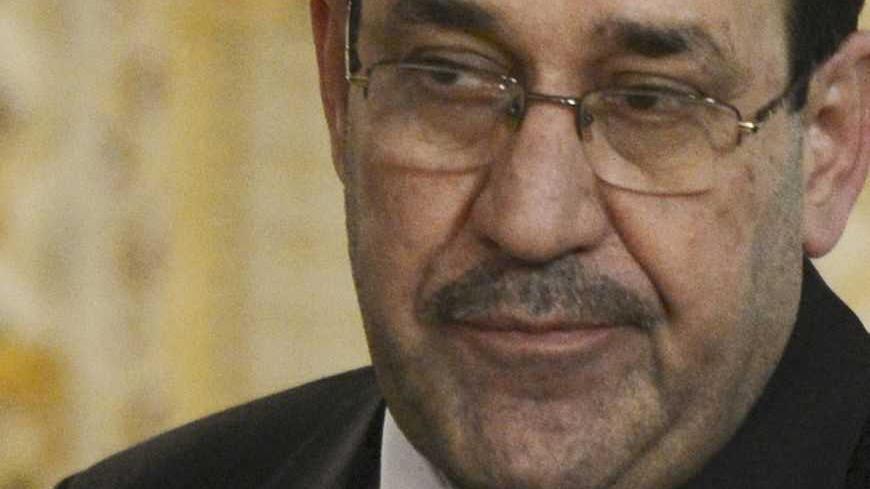 It is no coincidence that Iraqi Prime Minister Nouri al-Maliki is talking about the “division of Iraq” as an option to solve the various crises between the Kurds and Sunnis. In an interview with state-owned Al Iraqiya TV on Dec. 30, 2012, Maliki stated: "Iraq is left with four options: resorting to early elections, going to the negotiating table and reaching a solution based on the constitution, the outbreak of a sectarian war, or division."

This card is perhaps the most played in confrontations among Iraqis, and it has been brought up in the past by Kurdistan Region President Massoud Barzani and Speaker of Parliament Osama al-Nujaifi, a Sunni.

At first sight, it might seem that playing the division card on the political discussion table always comes in the context of mutual threats aiming to achieve gains. A closer look at the matter, however, reveals the readiness of the three Iraqi sects — Sunnis, Shiites and Kurds — to deal with this option, on the one hand, and their unwillingness to make huge concessions to push it out of the political conflict, on the other.

Even cultural and public Iraqi figures have consistently warned against “division” since 2003. They qualified the approval of “confederations” in the Iraqi constitution, as well as the 2006 project proposed by the current vice president of the United States, Joseph Biden, to form three big confederations in Iraq, as preludes for division. Interestingly enough, these same figures no longer dismiss the term “division” as publically “prohibited” but are considering it “possible.”

The accusations of “provoking division” were first heard during the protests in al-Anbar and other Sunni cities at the end of last year and were preceded by the military mustering around regions of conflict between Baghdad and the Iraqi Kurdistan Region.

The Iraqi map itself has only helped in feeding the fears of “division.” Iraq’s demographic distribution is not intermixed enough to remove any impressions of demographic differentiation. The civil war also contributed to widening the geographic gap between Shiites in the south, Sunnis in the center and west of the country and Kurds in the north. Only some cities maintained their demographic diversity relatively well — such as Baghdad, Kirkuk, Diyala and Mosul — but they witnessed racial and sectarian division within their own neighborhoods.

Beyond the Iraqi border, “division” is defined as a reflection of regional conflicts. Iraq has become a battlefield, having been a regional player in the past. Consequently, the complexity found in the region has been a major factor in directing Iraqi political figures towards their agendas.

There is talk about escalating Iranian power in the Shiite regions in Iraq and increasing Arab-Turkish power in the Sunni regions. Meanwhile, Turkey and Iran are dividing the areas of power in the Iraqi Kurdistan Region. As a result, closer relations are being fostered between the city of Sulaymaniyah, represented by Iraqi President Jalal Talabani, and Iran along with the Shiites close to it, such as Maliki. On the other hand, tighter bonds and clearer alliances are being formed between Erbil, represented by Barzani, and Turkey along with Sunni leaders.

The sectarian aspects of the regional conflict found a huge breathing space thanks to the Syrian crisis. Amidst warnings against “division,” it was not surprising that those indications reached Iraq.

To conclude, putting the “division of Iraq” on the political discussion table and always considering that idea as a last resort is devoid of logic when establishing any modern state in the world. In any case, managing a political conflict within any country cannot happen except in a unified setting. Based on this specifically, the systematic imbalance in Iraq today can be linked to the avoidance by political figures of the sects of the country to agree on its unity. This is happening even after more than seven years of voting on a constitution that qualifies Iraq as a “united country.”

Mushreq Abbas is a contributing writer for Al-Monitor’s Iraq Pulse. An author and journalist who has worked in the media for 15 years, he holds a degree in political science from Baghdad University. Beside writing studies and articles that covered Iraqi crises and publishing in the local, regional and foreign media, Abbas has worked since 2003 in the Iraqi media sector and co-founded media companies. He also produced a number of documentaries for different media and has managed Al-Hayat’s office in Iraq since 2005.