Under an almost full media blackout, Iraqi Prime Minister Nouri al-Maliki was re-elected as head of the Dawa Party for the third time, in what may mark the beginning of his battle to win a third prime ministerial term, Mushreq Abbas reports. 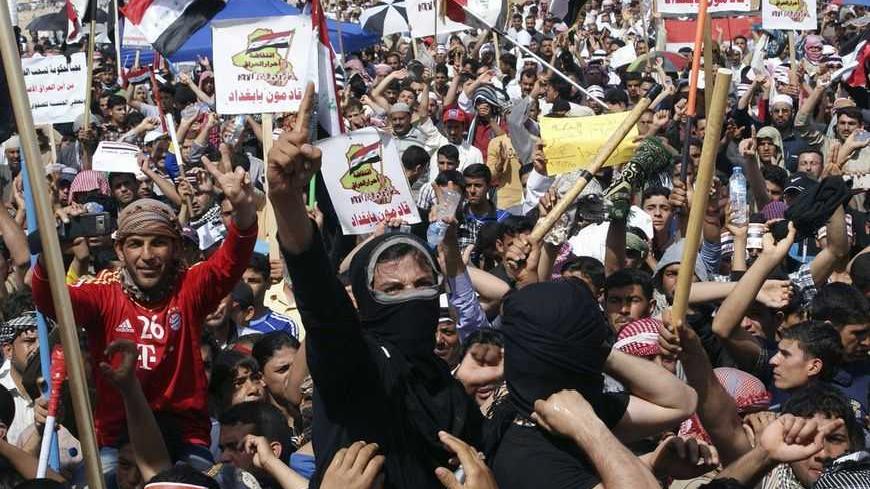 Iraqi Prime Minister Nouri al-Maliki has won a third term for the presidency of his Islamic Dawa Party in an election that was attended by a number of Iraqi political leaders but in which most media were absent. That election was the start of Maliki’s battle to renew his mandate as Iraqi prime minister, also for the third time.

The Dawa Party is one of the oldest religious parties in Iraq. It was founded in the mid-1950s and was inspired by the ideas of prominent Shiite cleric Muhammad Baqir al-Sadr. But since that time, the party has suffered a series of splits over its goals, leadership or relationships inside and outside Iraq during the era when it opposed Saddam Hussein’s regime. The party regained its presence on the Iraqi scene in 2003 and has held the prime minister’s post since 2005.

The official newspaper Al-Bayan and Dawa’s official website published brief reports that the Islamic Dawa Party has re-elected Iraqi Prime Minister Maliki as its head. This is the third time he has occupied that post since 2006, when he also became prime minister after the withdrawal of former party leader and Prime Minister Ibrahim al-Jaafari, who went on to establish the Reform Movement. Maliki was re-elected in 2009 to head the party and in 2010 to head the government.

It is peculiar that Dawa did not mention in public statements nor in brief reports three key matters: the detailed results of the elections, the issues discussed in the party convention and the results of those discussions, and the internal party regulations with regard to how one person can be both the party’s president and Iraq’s prime minister at the same time.

With regard to the first matter, many party members declined to give details on the election results. But reliable information from within the party confirms that Maliki was re-elected by consensus, he had no challenger, and no one voted against him.

Dawa is no different from other Iraqi parties: their internal elections happen under complete blackout. Many believe that Iraqi parties call for electoral transparency only when it has to do with those parties’ conflicts with other parties.

But Maliki’s unanimous election to lead his own party indicates that the talk in recent months about the existence of “hawks” and “doves” within the party, and that a number of figures wished to challenge Maliki, was finally settled in favor of Maliki, who was elected by consensus.

The second important matter is that the Dawa Party is in effect leading the Iraqi state and its sensitive institutions and that the party is deeply interfering in government actions. The party did not explain its ideas, goals and vision for the next phase (at least publicly). And it did not propose ideas and programs for Iraq and the region, even though this is something that should be explained to the public when a major party holds a general convention.

These remarks perhaps reveal something hidden in the internal Dawa conflict. The party, which does not rely on the charisma of its leader Maliki to gain popular support, is facing numerous questions about its future. The most important of those questions is over what Maliki is truly leading. Is he leading the party or the political bloc (the State of Law Coalition) that was formed in 2009 under his leadership and was supposed to be have a national outlook, not a religious or sectarian one?

In the brief report that appeared in Al-Bayan, Maliki said: “National identity and tolerance must be the main deterrents against Baathist and terrorist schemes that intend to tear up Iraq’s unity and sabotage its political experience. Political pluralism must rely on national culture and the spirit of tolerance in order to achieve the citizens’ aspirations because the responsibility is complementary.”

The third matter raised by the Dawa conference is how to deal with the contradiction between the party’s rules of procedure, which prevent the party’s president from holding a formal political function, and the fact that Maliki is head of both the party and the Iraqi government.

That issue was highly controversial within the party over the past years. It is not known whether the party changed its rules of procedure to suit Maliki’s circumstance or whether some party “hawks” will later use that fault to prevent Maliki from running for a third term.

The latter point does not appear logical for reasons related to the overall performance of the Dawa Party in recent years, which saw the transformation of Maliki from a low-ranking leader for three decades into the party’s symbol and uncontested leader.

There are indications that the party’s latest elections produced no significant changes in the party’s political bureau and Shura Council. This means that the party’s leadership is sticking to its political, social and religious policies of the past years, which allowed the party to control the prime minister post for three consecutive rounds.

The Dawa Party’s latest convention indicates that Maliki has launched his political battle for a third prime ministerial term (2014-18). The first step in this battle is for Maliki to solidify the party’s political and religious foundations as well as his leadership in the party. The second step is to appeal the constitutionality of the law that set term limits for the prime minister. Maliki’s rivals passed that law to prevent him from running for a third term. And the third step is for Maliki to mobilize his supporters to gain more seats in the 2014 parliament then he did in the 2000 parliament.