The Islamic Dawa Party could on the verge of division after the reelection of Nouri al Maliki as its secretary-general; however, many party leaders see the party as continuing to be a strong and unified one. 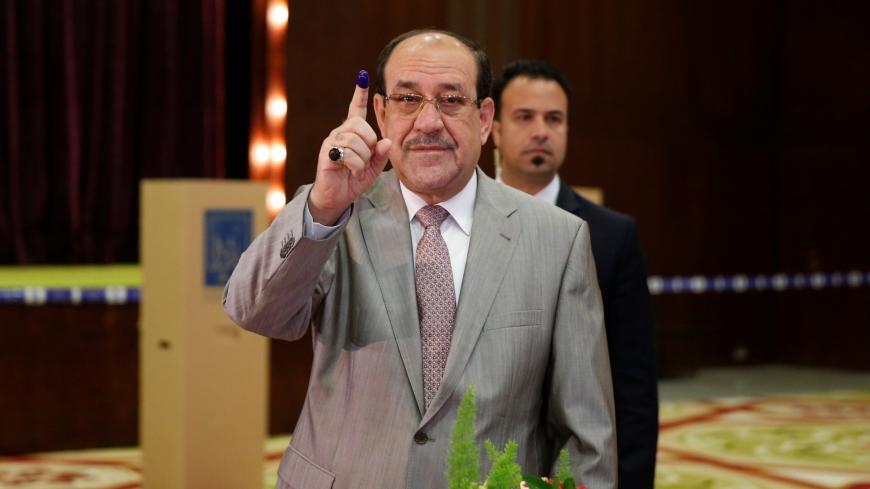 Former Iraqi Prime Minister Nouri al-Maliki shows his ink-stained finger after casting his vote at a polling station during the parliamentary election in Baghdad, May 12, 2018. - REUTERS/Ahmed Jadallah

The Iraqi Islamic Dawa Party reelected Nouri al-Maliki as its secretary-general July 13 during the party’s convention in Karbala province south of Iraq. Maliki was prime minister of Iraq between 2006 and 2014.

The party promised its supporters in a statement to “continue building the Dawa Party and developing it into an Islamic and political force advising the government.” The party has been distanced from the government after Adel Abdul Mahdi took over as prime minister in 2018, replacing Haider al-Abadi of Dawa, who had replaced Maliki as the country's leader in 2014. Maliki had become prime minister in 2006.

Political writer and National Media Center chairman Mahmoud al-Hashimi said, "The statement of the convention was literary and steered clear of sensitive topics related to the previous period in order to maintain the unity of the Dawa Party.”

Indeed, Dawa member Kamal al-Saadi told Al-Monitor, “The convention proved that no division is possible in the ranks of the party.”

However, this seems to be far from the truth.

Abadi, who has long been in conflict with Maliki, said July 16, “There is a coup in the Dawa convention because Secretary-General Nouri al-Maliki did not respect his written commitment to refrain from presenting his candidacy.” Abadi also is head of the Victory Alliance.

A source close to Dawa also told Al-Monitor, “Eight members of the Shura Council boycotted the meeting in objection to what they considered an illegitimate mechanism in choosing the secretary-general of the party after the actual agreement was to postpone the election.”

The editor-in-chief of Al-Sabah newspaper, Abbas Abboud, told Al-Monitor that despite these conflicts, “The party will continue to have a prominent role in the upcoming phase because it is one of the oldest ideological parties in Iraq and the region. In every crisis, it has proven to be capable of overcoming obstacles and preserving the unity of its ranks.”

Dawa is one of the main Shiite political parties. It was founded in the late 1950s by Muhammad Baqir al-Sadr, who was executed by Saddam Hussein in 1980 along with many other Dawa leaders. It is affiliated with the Shiite Islamic Movement.

Ali al-Mou’min, a Dawa leader who attended the convention as a researcher of the party’s history, told Al-Monitor, “What the party achieved in its last convention is very important as it aims for a unified political and organizational decision. It also aims to have a cohesive approach and a unified project in the upcoming phase.”

Mou’min said, “It seems that the new Shura council and the leadership council are a lot more coherent than before. This phase greatly resembles 1981, when the party overcame a period of political and organizational divisions and developed a unified project. Back then Ayatollah [Muhammad Mahdi] al-Asifi was a great symbol representing the party [in exile in Iran]. The same thing will happen today with a new symbol, al-Maliki.”

Party leaders who had been in exile returned to Iraq after the fall of Saddam in 2003.

Mou'min said, “The Dawa Party will mainly execute three strategic plans: the restructuring of the party, the reform of its internal regulations and the redevelopment and unification of its political project. Despite the great importance of ideology, which is at the base of the party’s philosophy and founding, the party might reconsider it in the future.”

He also said, “The result of the unification of decision-making within the party will show in 2022 during the parliamentary elections, which the party will be involved in as one unified, strong bloc.”

There was, however, criticism highlighting that the party did not conduct a general evaluation of its Islamic and ideological project, particularly in light of the radical political and ideological change hitting the Middle East and the world. There was a great focus on Dawa's role in Iraq and the party’s internal organization.

Abbas al-Moussawi, a spokesman for the State of Law Coalition, which is also headed by Maliki, told Al-Monitor, “The convention discussed internal and external issues. Members of the party discussed the role of young people and young leadership within the party. They also discussed ties with neighboring countries and the region while looking into ways to maintain local and regional stability through dialogue.”

Saadi said that when it comes to whether the party seeks to regain the prime minister's post, “It is possible, but it has nothing to do with the party’s ambition as much as it has to do with the nature of the upcoming phase and the circumstances that will affect the path of the party.”