Is Iraq’s Dawa Party on verge of division?

The Dawa Party, the main party in Iraq's ruling coalition in Iraq, is suffering divisiveness, with lines drawn between Prime Minister Haider al-Abadi and his predecessor, Nouri al-Maliki. 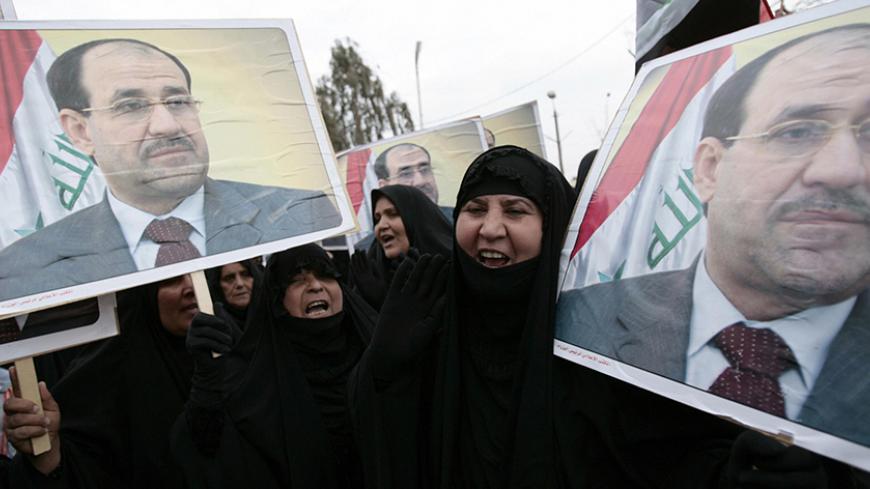 Political rifts and partisan splits are nothing new to the Shiite Dawa Party, the dominant organization in Iraq's governing coalition since 2005. The differences within the party since Haider al-Abadi took office as prime minister in September 2014 are unprecedented, reflecting a national and regional conflict among Shiites.

The Dawa Party was founded in the 1950s by clerics and religious university students intent on fighting communism and establishing Islamic rule. The Muslim Brotherhood greatly inspired the party’s basic ideology, and the party’s founders had close ties to the Iraqi Islamic Party, which was considered the Muslim Brotherhood’s Iraqi branch. The Dawa Party is also associated with the Brotherhood-inspired Hizb ut-Tahrir. Taleb al-Rifai, a Dawa Party founder, cited these linkages in interviews with Rashid al-Khayoun for the book “Amali as-Sayed Taleb al-Rifai” (Dictations of Sayyed Taleb al-Rifai). Most Islamic political organizations from this earlier era tended to be pan-Islamic in their goals, ignoring the Sunni-Shiite division.

Historically sharp differences have occasionally emerged within the Dawa Party because of the dialectical nature of the relationship between its affiliated academics and clerics. The party experienced divisions during the decades it spent opposing successive leftist and nationalist regimes in Iraq, largely driven by differences among various politico-religious leaders, resulting in such formations as the Asefi-Dawa Party, Kourani-Dawa Party and the Islamic Dawa movement. When pressure by the Baathist Party forced members to flee to Iran and Syria in the 1970s and 1980s, their divisions and differences emerged there as well. In 2003, the party rose to power within the Iraqi Governing Council, but the old fractiousness remained.

Despite sharp internal differences, none of the Dawa Party's branches broke from the larger camp calling for Islamic rule. Before Abadi took office, the differences had been more about political tactics, than ideology, such as how to work with Iran in confronting former President Saddam Hussein and whether to joint the Iranian military forces or preserve their independence. Also, in light of the pragmatism espoused by many Dawa Party members, the dissident cadres of the party that broke away have not hesitated to join forces with their former party when partisan interests required it. This is one of the reasons the Dawa Party has managed to hold on to the reins of power since 2005. For instance, the Dawa Party-Iraq Organization and the National Reform Movement supported the Dawa Party in every elections held since 2003. At the moment, however, ideological and political disagreements among Dawa Party leaders could be interpreted as foreboding signs for the party.

Prime Minister Abadi took office after a long political struggle. His predecessor, Nouri al-Maliki, insisted on a third term for himself, but part of the Dawa Party leadership, in addition to other political parties, opposed his candidacy. Maliki had become a burden in the eyes of some Dawa members because most of the other political movements refused to back him, and the party would not be able to form a government without entering into a coalition with other movements.

Unable to get rid of Maliki on their own, his Dawa opponents resorted to Grand Ayatollah Ali Sistani to address the crisis surrounding the premiership, asking him to issue a decision to settle the dispute among the Shiite political class. On June 25, 2014, Sistani responded, stating, “I believe a new consensual prime minister acceptable to all parties must be elected immediately — a prime minister who can deal with all the political components of the country to save it from the dangers of terrorism, sectarian war and division.”

Sistani’s statement suggested that he opposed Maliki’s nomination as well and wanted the Dawa Party — the largest bloc in the National Alliance, winner of the 2014 parliamentary elections — to nominate a candidate acceptable to the other parties. Thus, Abadi became prime minister through Sistani's indirect support. After Abadi took office, Sistani received him in Najaf on Oct. 20. The ayatollah had refrained for three years from receiving Maliki in protest of his mismanagement of Iraqi governance.

The Dawa Party is at the moment divided into two parts. Abadi’s bloc wants to preserve close relations with the United States, keep some distance between Baghdad and Tehran, avoid hostile relations with Saudi Arabia and bring about national reconciliation, including good relations with the Kurds and Sunnis. Maliki’s bloc, however, has explicitly aligned itself with Iran, is hostile toward Saudi Arabia and the United States to the extent of suggesting Abadi approach Russia and is unwaveringly pro-Shiite, including backing for Shiite militias. On Oct. 27, the Maliki bloc withdrew its support from Abadi following the prime minister's apointment of Imad al-Khersan as secretary-general of the Cabinet on Oct. 20. Khersan is an Iraqi American who worked with the US occupation administrator Paul Bremer as an American official after 2003.

The animosity between Abadi and Maliki has become conspicuous. In March, Abadi accused Maliki of having been reckless with the blood of the Iraqi people, a reference to the heavy loss of life inflicted by the Islamic State and other extremists during Maliki’s tenure. More recently, on Oct. 3, Abadi supposedly referred to Maliki as the “leader of necessity” who during elections squandered billions of dollars of Iraqi funds, dispensing the nation's wealth in the hope of attracting votes. Iraqis had also used the same term to describe Hussein. After several warnings from Maliki, Abadi's office issued a clarification Oct. 7 stating that “commander of necessity” was a reference to Saddam, not Maliki. Maliki’s office preferred to interpret the statement as an apology rather than a clarification.

Observers of Abadi's first year in office have surely noticed the harmony and convergence of views and statement between Abadi and Sistani. Meanwhile, during the year that saw clashes between the top two Dawa Party leaders, Maliki and the Iranian leadership reached a rapprochement. This portends a potentially significant Shiite rift, pitting the Dawa camp with ties to Sistani against the camp close to the Iranian supreme leader, Ayatollah Ali Khamenei. In light of this split, it is unlikely that the party can continue to operate as a single unit, as they no longer share the same coherent ideology and have different political behaviors. In that case, the two camps might consider gradually settling matters by separating and forming two entities.