Across the Iraqi media, speculation has been rife about the current health of Iraqi Prime Minister Nouri al-Maliki, with conflicting reports from government and opposition sources. 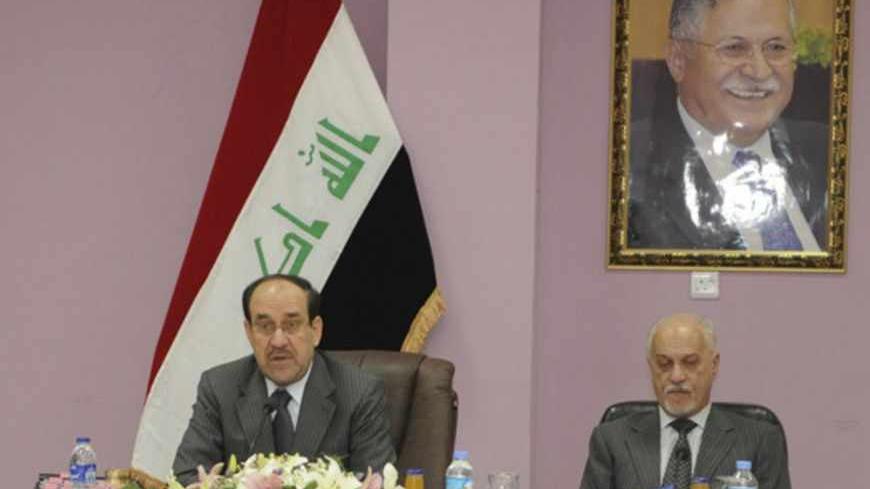 Iraqi Prime Minister Nouri al-Maliki (L) sits next to Iraq's Deputy Prime Minister for Energy Hussain al-Shahristani during a meeting of the Council of Ministers in Kirkuk, May 8, 2012. At top right hangs a picture of Iraqi President Jalal Talabani. - REUTERS
Ali Abel Sadah
May 13, 2013

On May 10, 2013, conflicting news reports about Iraqi Prime Minister Nouri al-Maliki suffering from a health problem were rampant in Baghdad, while speculation about what kind differed.

On that day, the Islamic Supreme Council was holding a memorial service on the anniversary of the martyrdom of its former leader, the late Mohammed Baqir al-Hakim. Maliki  was supposed to attend the event and deliver a speech.

Hakim was a Shiite leader who stood out in 2003 as one of the most prominent leaders in the opposition to Saddam Hussein’s regime. In 2004, as he emerged from the gold-domed shrine of Imam Ali Ibn Abi Taleb in Najaf, where he was delivering a speech before his supporters, a massive car bomb exploded.

Iraqi leaders made a point of attending the memorial ceremony and delivering emotive speeches to commemorate Hakim. Maliki, however, was absent because of illness. He sent Ali al-Adib, minister of education and prominent leading member of the Dawa Party on his behalf.

At the podium during the ceremony, which was attended by Al-Monitor, Adib delivered a speech attacking the electoral law, dubbed Saint Lego, saying that “it does not achieve compatibility between blocs.”

The electoral system that was amended last year by the Iraqi parliament has helped minor blocs to achieve electoral gains. The Supreme Council, in addition, benefited from this system during the last provincial elections of April 2013.

Adib warned that “psychological division still exists in Iraq, and political division might follow if  dialogue fails. The country is being torn apart and politicians have not yet found a way to adopt the mechanisms of partnership."

Adib, however, withheld details about the nature of Maliki’s health problem and as a result, speculation was rife.

Haider al-Abadi, a leading Shiite figure in the Dawa Party, revealed to Al-Monitor, however, that “Maliki has a cold; there is nothing to worry about.”

Such a statement did not stop the influx of rumors on social media websites, which went to greater lengths in speculating on the status of Maliki’s health.

Disparity has even hit official sources. A close source to Maliki was interviewed by Al-Monitor and reported as saying that “the prime minister is tired and needs to rest.” The source, who spoke on condition of anonymity, reiterated that there was “nothing to worry about.”

Last month, according to Sadik al-Rikabi, a close adviser to Maliki, the latter was transferred to the intensive care unit in the City of Medicine medical complex in Baghdad — one of the biggest hospitals in Iraq.

Reports spread that Maliki had suffered from a heart problem, the effects of which had been aggravated of late, because of the poor results in the most recent elections. Maliki lost 90 seats in provincial councils, compared with the results of the 2009 elections.

Yet, the news was trending on social media websites. On Facebook, for example, an unofficial page for Maliki managed by his supporters posted a comment that read: “Maliki gets sick but does not die, just like Iraq.”

On the websites of Iraqi journalists and activists, Maliki’s condition was a hot topic of conversation. Some claimed that he was suffering from a heart problem and that his condition was at stake, while others diagnosed him with hyperglycemia, affirming that his office expeditiously sent for a doctor from the UK.

Maliki and his political and technical teams are highly discreet with Iraqi journalists. The prime minister’s office does not talk about any subjects pertaining to Maliki’s condition. Even the administrative structure and the number of advisers are still a mystery. Observers believe that this state of isolation intensifies the interpretations and gives credibility to rumors.

On Feb. 24, 2008, Maliki went to London to undergo medical tests that were described by the Council of Ministers’ official media release as “routine checkups.” At the time, Iraqi doctors advised Maliki to go to London to undergo his medical tests and to rest assured about the results that had already been detected and treated in Baghdad. Yet, when it comes to Maliki’s medical condition, information ranges between stroke, cardiomyopathy and hyperglycemia.

With conflicting news about Maliki’s health and the medical treatment of President Jalal Talabani, concerns are snowballing about the future of a political process that is already experiencing acute crises.

If doubts over Maliki’s health persist, according to Article 78 of Section 3 of the Iraqi Constitution: “The President of the Republic shall take up the office of the Prime Minister in the event the post becomes vacant for any reason whatsoever." If this occurs, "The President must designate another nominee to form the cabinet within a period not to exceed 15 days in accordance with the provisions of Article 73 of this Constitution.”

This article, however, cannot be carried out since Talabani [himself] is receiving medical treatment, the details of which are as yet unclear. Additionally, the constitution does not tackle the issue of both the president and prime minister being absent.