Some parts of the press dubbed him King Bibi, but these elections are a resounding vote of no-confidence against Prime Minister Benjamin Netanyahu, writes Ben Caspit. 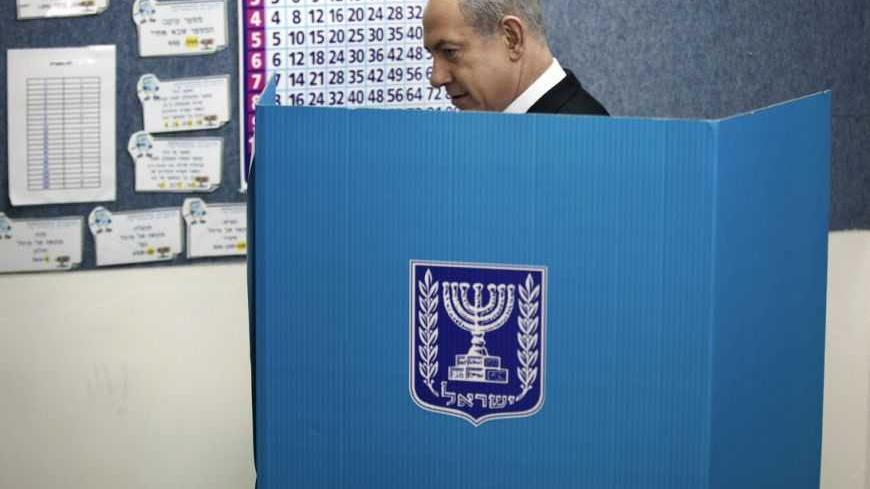 IsraelI Prime Minister Benjamin Netanyahu stands behind a booth as he casts his ballot for the parliamentary election at a polling station in Jerusalem, Jan. 22, 2013. - REUTERS/Uriel Sinai/Pool

What should have been a laid-back afternoon stroll suddenly turned dizzily nerve-wracking. True, Benjamin Netanyahu will likely be the next prime minister, but before he gets sworn in, he’ll work up a sweat running back and forth pleading. He’ll rant and he’ll rage as he tries to squeeze the proverbial square peg into a round hole.

He’ll reinvent the wheel, and himself, while he’s at it. He’ll call for a National Unity government and he’ll talk about a broad-based government too. But deep inside he’ll know that he failed, that he suffered a devastating political blow, and that he received a resounding vote of no-confidence from the public. There can be no greater political drama. The pollsters fell asleep on their watch. The pundits couldn’t read the map. The people of Israel are smarter than all of them. They proved that they’re not suckers.

Let’s start with Netanyahu. Some people called him King Bibi, but this was a king whose very kingdom spewed him out, whose own subjects couldn’t stand him, and whose public voted no-confidence in him. This was a king who almost lost a war, even though there was no clear enemy. This was a king who only managed to tie a team of battered, defeated rivals down in the dirt without any real agenda. The only reason Benjamin Netanyahu will be prime minister is because there is no alternative, and that is the result of a series of fascist laws intended to isolate the political system and defend against any talented populist outsiders from gaining admittance. Netanyahu is one of the least popular Israeli prime ministers … ever!

He would have been tossed out of the prime minister’s office if only some reasonable candidate ran against him. It already happened to him once, in 1999.

Yair Lapid is the big winner. In some certain constellation of forces, he could even be the next prime minister. It’s reasonable to assume that this won’t happen because Lapid isn’t ready for that role, either. Everything he does in the months ahead will have one single motivation behind it: How can he advance his chances to take it up a notch in the next elections. Lapid has an enormous burden of responsibility weighing down on him now. He mustn’t disappoint.

Masses of people voted for him without even knowing what’s hiding behind him or what really lies between his shoulders. From now on, Lapid can either sink or soar. The cost of error will be steep, and he will have to make some difficult decisions. Lapid can force Netanyahu to form a sane, centrist, Zionist government, which changes the system, which drafts the ultra-Orthodox, and which goes back to the negotiating table. Netanyahu will do everything — and that means everything — to remain prime minister, because in the end, that’s all Netanyahu cares about. If Lapid is different, if Yair Lapid cares about the country, he will have to force Netanyahu to change. He will have to insert a spine in the prime minister and help him recreate himself.

This will be a long, nerve-wracking night in Israel. Every seat that moves in either direction could help or hinder a potential new government. Coalition negotiations are already proceeding at full force, with everyone talking to everybody. But one voice stands out among the din. It is the parched voice of the sitting prime minister, Benjamin Netanyahu, who earned his troubles legitimately. He already dug his own political grave, and now he’s struggling for his political life.