The oil pipeline to be constructed between Baghdad and Aqaba raises fond memories among Israelis of the Mandate-era Kirkuk-Haifa oil pipeline, a time that many would be happy to resurrect, writes Jacky Hugi. 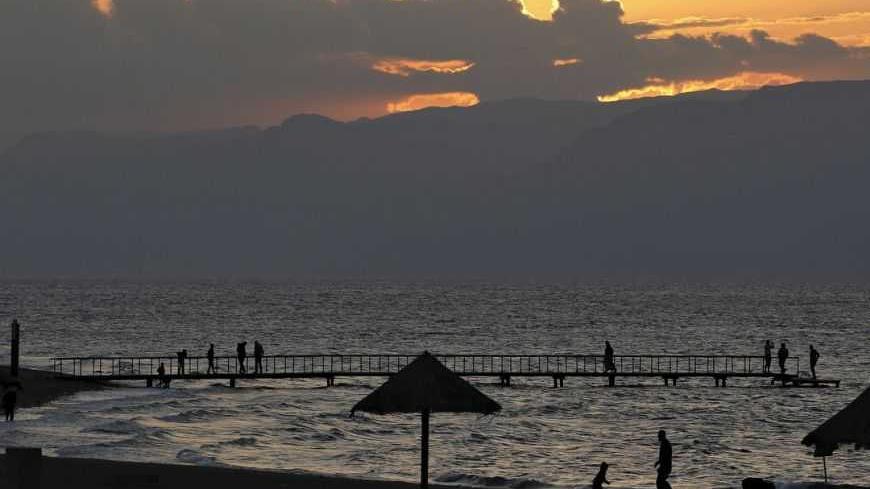 People are seen as the sun sets over a beach in the Aqaba Gulf on the Red Sea, south of Amman, Nov. 25, 2011. - REUTERS/Muhammad Hamed

The announcement from the office of Iraqi Prime Minister Nouri Al-Maliki was short. It was released only a few hours after his return from a short visit to Jordan where he met with Jordanian King Abdullah II. Baghdad, Maliki said, will provide crude oil to Jordan via a new pipeline that will reach the city of Aqaba on the coast of the Red Sea, only a few hundred meters from the Israeli border. This is a double blessing for Jordan, as it will provide an alternative to natural gas from Egypt; the latter supply was lost because of sabotage of the Egyptian pipeline in the Sinai Peninsula. In addition, [the transport of Iraqi oil by pipeline] will save the Jordanians the expenses involved in the transport of oil [by vehicles] that is done today.

Maliki’s pipeline will stop in Hashemite Kingdom territory very close to the Israeli border in Eilat. This brings us back to the good old days when we were able to inhale Iraqi oil here in Israel. The pipeline constructed by the Iraqi national company extended from Kirkuk [Mosul] through Jordanian territory to reach refineries in [Israel’s] Haifa; from Haifa the oil was sent by sea to Europe. This pipeline was constructed in 1935 and operated for 13 years. Iraq, Jordan and the land of Israel [Palestine] were then British colonies, and internal trade was routine. Moreover, Iraqi experts assisted in the construction of the refineries in Haifa and dealt with searching for oil here. Even then, terrorists used to sabotage the energy installations. Arab fighters struck the pipeline during the Arab Revolt in Palestine (1936-1939). A decade later, fighters of the Hebrew underground Etzel movement sabotaged the line. But the pipeline survived [all those attacks] only to receive its death warrant under political circumstances. The pipeline ceased operating when the British evacuated the land of Israel in May 1948 [when the state of Israel was established].

Thus we Israelis share a nostalgic longing for the Kirkuk-Haifa oil pipeline. It represents the memory of peace economics, economics that is stubbornly forestalled by politics and wars. Sometimes, reality sends us a reminder of those days. During the Gulf War of 1991, Saddam [Hussein] rained Scud rockets on Israel from areas in his territory that were labeled H2 and H3. These are two of the eight pumping stations that run the length of the pipeline, named after their destination — Haifa. When Saddam was toppled in 2003, hopes rose in Israel that oil could again be shipped [to Israel from Iraq] with the assistance of the de facto ruler of Iraq, the United States government. This was a false hope because Baghdad, even when occupied by foreigners, still remained Arab. And with regards to the Arabs, so long as no other decision is reached — joint initiatives with the State of Israel are still beyond the pale.

The unstable reality in our region may still pose difficulties for the brand-new Jordanian-Iraqi project. Global energy changes may render the use of oil to be superfluous. But if this project will, indeed, hit the road, then the pipeline may provide Jordan with all its energy consumption needs, and even more. Today, Baghdad provides Amman with between 10 to 35 thousand barrels of oil a day, at a very reduced price. The Jordanians need a hundred thousand barrels a day, but the pipeline to Jordan is expected to transport an amount equivalent to a million barrels. And Aqaba does not have to be its last stop.

For all of this to happen, Iraq must first rehabilitate its oil economy that received mortal blows during the [Gulf] war and the years of international sanctions against the Ba’ath regime of Saddam Hussein. Iraq must first rebuild its electrical facilities that have been struck by terrorist groups, without which no proper oil economy is possible. The large network of transport pipes has also been neglected and must be fixed and overhauled. Just around the corner, Iraq awaits the kind of future that is reserved for economic empires. In the coming two years, Iraq has the ability to double its production to five million barrels of oil a day and later on to eight million barrels of oil a day, and even more. If it will properly plan its oil economy, Iraq may yet build itself up in the foreseeable future as an important oil supplier for the giant economies of China, India and Malaysia.

Is an oil pipeline to Haifa also in the cards? Perhaps, in the future. The present — not really. The [pipe]line is no longer usable. In the early 2000s, Jordanian metal-robbers extricated many long kilometers of the pipeline from the ground, cut it and attempted to sell it for profit. The transaction was exposed in a Jordanian newspaper, and implementation of the deal was blocked. The sectioned pipes were visible for a few years along the high-speed road between Amman and the Al-Karamah Iraqi border crossing.

In the current era, a future oil pipeline from Iraq to Eilat is a remote dream; the Arab world still views contact with Israel as a dance with the enemy. But if we have learned anything about our region in the last decade, ever since longstanding rulers started to topple like a house of cards, it is “never say never.” Not only is the world changing in front of our eyes, but even the change is changing. Change is faster and more startling than in the past, sometimes even fantastical. Few believe today that there will be formal relations between Baghdad and Jerusalem in the foreseeable future. But until two years ago, who would have believed that opponents of Gaddafi’s family would rule Tripoli and that a Muslim Brotherhood president would serve in Cairo.

It is true that the Israeli energy economy needs an alternative to Egyptian natural gas, gas whose delivery was halted practically overnight on the heels of the Cairo revolution. But eventually, Israeli consumption may be fully supplied by gas that was discovered in recent years opposite Israel’s shores. The Iraqi pipeline is a symbol, an allegory of something else, something wider and deeper: Even if Iraqi oil will not be transported here, most of the Israeli public would find official diplomatic relations with Baghdad a cause for celebration.