Iraq's decision to close border crossings in Sunni regions bordering Syria may be primarily for security, but it is also taking an economic toll, writes Omar al-Shaher. 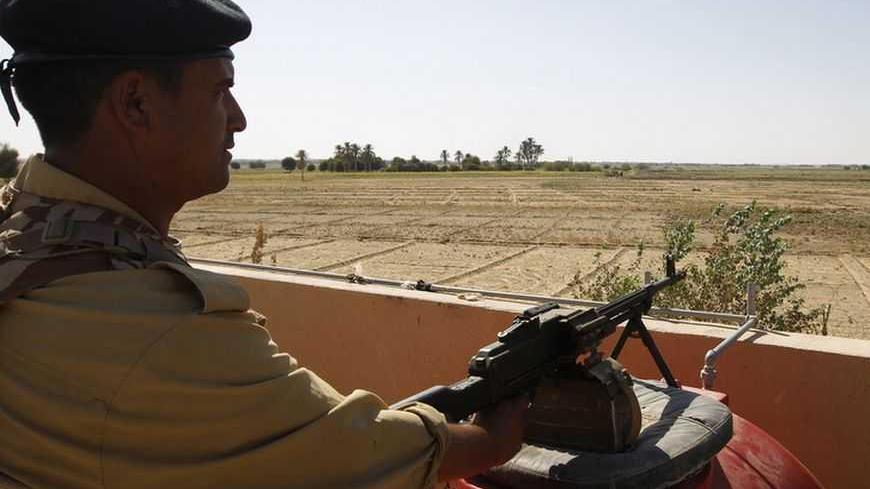 An Iraqi border policeman mans a machine gun near the Iraqi-Syrian border at the crossing from Abu Kamal to Qaim, in the Sunni heartland of Anbar province, Sept. 8, 2012. - REUTERS/Thaier al-Sudani

As of now, the Iraqi market has not registered any clear rise in prices following the closure of three border crossings linking Iraq to both Syria and Jordan.

The Iraqi government recently decided to close two border crossings with Syria, at Rabia in Nineveh province and al-Walid in Anbar province, after having previously closed the Jordanian-Iraqi crossing at Trebil in Anbar.

The provinces of Anbar and Nineveh — with their respective capitals of Ramadi and Mosul — in addition to other areas, have been experiencing daily protests. They have been rallying against what they describe as a policy of Sunni exclusion implemented by Iraqi Prime Minister Nouri al-Maliki’s government. The majority of Anbar and Mosul’s populations are Sunni Arabs.

There was no official comment on the reason for the closure of these crossings. The Iraqi Army confirmed that they have received information that armed groups intend to cross from Syria and Jordan and target protesters. Yet Sunni politicians claim that these measures may be a slap on the wrist for the Sunni regions in which the protests against Maliki are taking place.

The Trebil crossing is the only gateway through which Iraqi oil is delivered to Jordan and Iraq had provided Jordan with 100,000 barrels of oil to help it overcome its current energy crisis. Iraqi merchants also bring goods back to Iraq through the Jordanian port of Aqaba then through the Trebil crossing in Anbar.

These merchants bring clothing and electrical items from China, as well as ceramics and home appliances from Spain and Italy. They also bring food supplies from Egypt and Saudi Arabia, and regularly supply Iraq with vegetables from Jordan.

However the multiplicity of Iraqi border crossings is probably what kept market prices stable after the closure of the three crossings.

Iraq relies heavily on Basra’s ports, which overlook the Shatt al-Arab river, for its material imports from around the world.

Numerous Iraqi merchants in Baghdad's main markets of Jamila and Shorja underscored that the Trebil crossing is mainly an export crossing, and when the government closed it, merchants deferred to other crossings as they have done in the past.

The deterioration of security in Anbar after the U.S. invasion of Iraq in 2003 allowed armed militias to control large areas of the international highway linking Iraq to Jordan. However about two years ago, the Trebil crossing regained some of the commercial importance that it had lost.

Merchants say that shipping fees at the Trebil crossing are more expensive than at other ports. The Jordanian port of Aqaba is about 1,200 kilometers [  ] from Baghdad, whereas the port of Basra is about 600 kilometers from the capital.

Zia Ghalib, a political activist in the city of Ramadi, believes that the closure of the Trebil crossing “is an attempt by Maliki to punish Sunni protesters ... Maliki tried to cut off the livelihood of the people here, but it seems he has failed. ... We have been protesting and holding sit-ins in Ramadi for going on two weeks, but we set up alternative routes and do not disrupt traffic.”

Iraqi truck drivers do not feel that the demonstrations taking place in Anbar province have hindered commercial traffic with Jordan.

Karim Khadir, who runs a small fleet of freight trucks in Ramadi with his brothers, said that “the rumors that the demonstrations in Anbar closed the international highway between Iraq and Jordan are nonsense, … It is true that the demonstrators have set up camp in the middle of the international road, but there are two alternative routes which were set up prior to the sit-in so as to ease the passage of vehicles and goods.”

Khadir continued, saying, “The location of the demonstrations in Anbar is 550 kilometers away from the Trebil border crossing with Jordan. This eliminates the possibility that the government decided to close this crossing because of effects from the demonstrations.”

Omar al-Shaher is a contributor to Al-Monitor’s Iraq Pulse. His writing has appeared in a wide range of publications including France’s LeMonde, the Iraqi Alesbuyia magazine, Egypt’s Al-Ahaly and the Elaph website. He previously worked for Al-Mada covering political and security affairs and as a correspondent for the Kuwaiti Awan newspaper in Baghdad in 2008 – 2010.