Two prominent US Middle East scholars are urging the US to officially designate as terrorists Israeli extremists who perpetrate violence against Palestinian and Israeli citizens — even moderate elements of the settler movement, writes Al-Monitor's Laura Rozen. A recent spate of attacks sparked the call, which would prevent US funding for such groups. 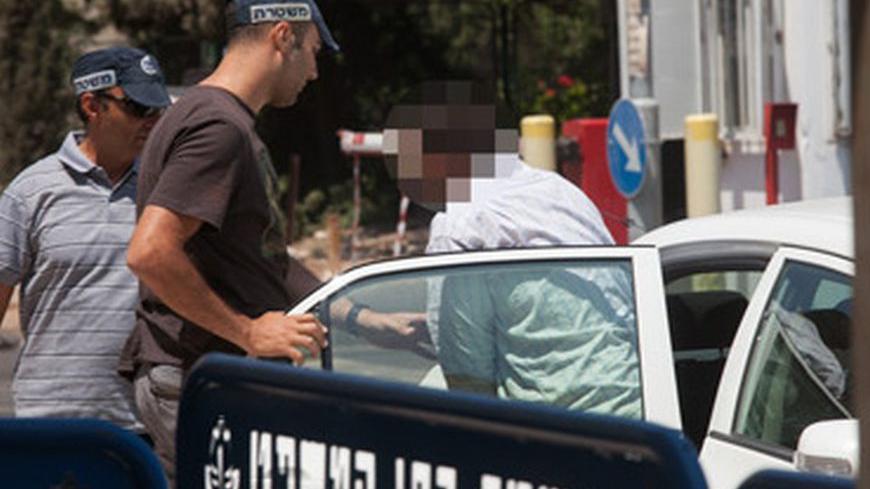 The lynching suspect of Palestinian youths arrives to court in Jerusalem. - Ohad Zwigenberg via ynetnews.com

Amid a rising spate of Jewish extremist violence in Israel and the occupied West Bank, two prominent US Middle East scholars are urging the United States to officially designate as terrorists those Israeli extremists who perpetrate terrorist violence against Palestinian civilians, Israeli citizens and even moderate elements of the settler movement.

The US, “much like Israel…, should consider designating individuals involved in acts of violence against Palestinians as terrorists,” Daniel Byman and Natan Sachs, researchers at the Brookings Institution Saban Center, wrote in the current issue of Foreign Afffairs.

“Such a designation would allow US authorities to prevent Americans from sending them funding and would be a way to support those Israelis seeking to combat the rise of extremism,” they continue.

Israeli leaders unusually forcefully condemned “as hate crimes” and "terror” an attempted lynching of Palestinian youths by a mob of Israeli teenagers in West Jerusalem’s Zion Square last week. Israeli authorities arrested seven Israeli teenagers suspected in the attack, which came on the same day a Molotov cocktail was thrown at a Palestinian taxi near the West Bank settlement of Bat Ayin, in which five members of a Palestinian family and the driver were burned.

“We unequivocally condemn racist violence and urge the police and law enforcement community to act expeditiously to bring the perpetrators to justice,” said Mark Regev, a spokesman for Israeli Prime Minister Benjamin Netanyahu.

"The hate crimes which were carried out against Arabs over the weekend in the West Bank and Jerusalem are intolerable and must be dealt with using a heavy hand,” Israeli Vice Premier Moshe “Bogie” Ya’alon, from Israel’s ruling Likud party, said on August 19.  “These are acts of terror with all that implies and are against Jewish ethics and values and are first and foremost an educational and moral failing.”

Such language from Israeli leaders to condemn Jewish extremist violence ”is a game-changer in terms of the discourse,” veteran Israeli peace activist Daniel Seidemann wrote in an analysis posted by the Atlantic’s Jeff Goldberg. “It's not only the ‘Arabists’ at State that call this terror, this is from our deputy prime minister, who is not about to get a prize from B'Tselem (Israel's most prominent human rights group).”

“Calling these acts ‘terrorism’ is very important,” Foreign Affairs’ co-author Sachs said in a press call organized by the Council on Foreign Relations on Wednesday. “It represents a break between the mainstream right and this violent fringe. More and more settler leaders see this as a stain on their own political cap.”

Sachs said that while the Israeli leaders’ forceful denunciation of the violence is encouraging, more vigilance and legal tools are needed to protect Palestinian civilians, especially amid the stalemated Israeli-Palestinian peace process.

“With the peace process in a stalemate, Israel's control of the West Bank is not likely to end soon, and the government cannot ignore the persistent settler violence by claiming that the settlement issue will soon be resolved as part of a peace deal,” Byman and Sachs wrote in Foreign Affairs.

“In arguing that Israeli and American authorities should designate these as acts of terrorism, we are joining Israeli officials — generals, the vice premier, to describe these attacks,” Sachs said.

“Designating individuals as terrorists means a host of legal [tools] come into play,” Sachs explained. “That means legally US citizens would be forbidden from funding these organizations,” thus reducing financial and ideological support for extremists whose acts of destabilizing violence are aimed at intimidating and thwarting the legitimacy of the Israeli state and the Palestinian authority.

The State Department has listed acts of Jewish extremist violence in its annual terrorism reports going back to 2008, but has not formally designated perpetrators, such as the so-called “price tag” gang, as terrorists.

On Wednesday, the State Department joined Israel leaders in harshly condemning the Israeli teenagers’ attacks on Palestinian youths, which left a Palestinian teenager, Jamal Julani, in a coma for two days.

“We condemn in the strongest possible terms the senseless act of hate and violence committed against a Palestinian youth in Jerusalem on August 17,” The State Department said. “We wish victim Jamal Julani a speedy recovery.”

“Discriminatory acts of violence undermine and discredit efforts toward peace and security between Israelis and Palestinians,” the State Department statement continued. “We welcome Prime Minister Netanyahu's unequivocal condemnation of racism and violence and his call for a full police investigation. The perpetrators of this hateful crime must be held to account.”