West Bank settlers have once again attacked Palestinian residents and soldiers of the Israel Defense Forces, and once again the army and police showed no attempt to apprehend the lawbreakers. 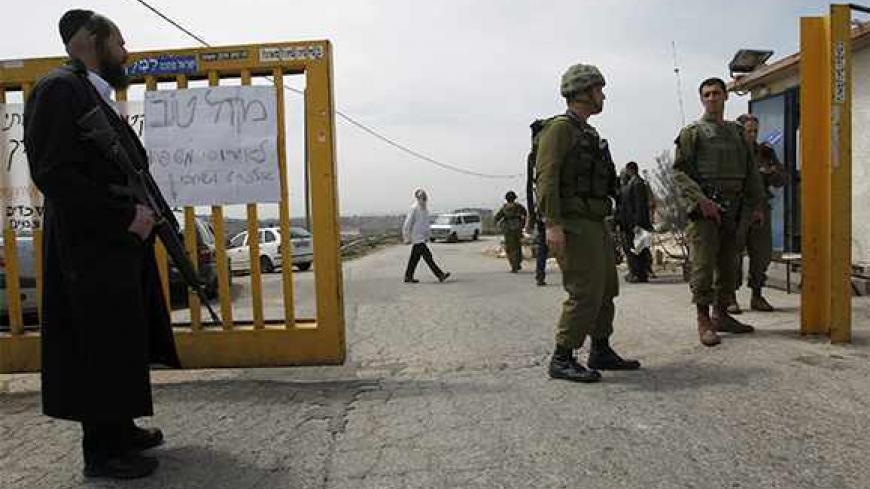 Israeli soldiers (R) and a Jewish settler (L) stand at the entrance to the West Bank Jewish settlement of Bat Ayin, near Hebron April 2, 2009. - REUTERS/Ronen Zvulun

The Israel Defense Forces’ (IDF) Central Command set a precedent by deciding to stop providing security for the West Bank settlement of Bat Ayin in the Gush Etzion settlement cluster. The decision came after anonymous masked men attacked soldiers at the settlement's gates. The incident started when the assailants tried to attack a Palestinian truck driver who got caught there. In order to prevent IDF troops from intervening, the masked men fired pepper spray at the soldiers.

Violence by settlers against the IDF soldiers is nothing new. For anyone familiar with the relationship between the army and the settlers, the real questions should be: How long will these sanctions last? A month? Two weeks? A week? Or maybe it will just be for a couple of days.

Bat Ayin is a religious settlement on the western slopes of Gush Etzion, 800 meters above sea level. Many of the settlers are newly-religious Jews, affiliated with the Breslov and Chabad Hassidic sects, who came to build their homes on this towering hilltop, overlooking a stretch of territory that extends from the towns of the Negev Desert in the south all the way to Tel Aviv in the west. Most of the settlements in the West Bank were established on higher points of ground, which offer strategic control of the surrounding area. The settlements also offer a better quality of life and a stunning view from just about every home.

It wasn’t the stunning view that made Bat Ayin famous, however. The settlement gained notoriety in 2003 after an underground Jewish terrorist group was discovered there, consisting of local residents for the most part. The Bat Ayin underground members were caught after they planted a bomb outside a girls’ school in East Jerusalem. They were sentenced to 15 years in jail, and the settlement from which they emerged became synonymous with fanatical extremism and violence against Palestinians.

Bat Ayin isn’t the only settlement with a hard core of extremist residents who commit violent acts driven by hate. On the same day that the Palestinian truck driver and Israeli soldiers were assaulted in Bat Ayin, settlers uprooted 230 olive trees in the Palestinian village of Azzoun in Samaria. The destruction of olive trees and attacks against Palestinian property in the territories have become an almost daily occurrence. In most cases, the attack ends with a complaint to the police, submitted by Israeli and Palestinian human rights organizations, and nothing is done about it. The case is closed due to a lack of evidence or a scarcity of public interest.

Even physical violence against Palestinians, sometimes committed right in front of soldiers who prefer not to intervene, usually ends without any charges or arrests. The “Wild West” phenomenon in the territories has only intensified because the IDF and the Israeli police prefer to step back instead of enforcing the law, so as not to come into conflict with the settlers.

In early October, some 20 settlers, most likely from the settlement Shilo, attacked an elementary school in the Palestinian village of Jalud. They threw large rocks at the teachers’ cars and burned olive trees in the village. In this case, the residents of Jewish settlements near Jalud assumed responsibility. They claimed that the attack was a response to the destruction of the illegal outpost of Geulat Zion, where a total of two families lived. How did this serious incident end? With four settlers detained for questioning, though they were released after a few hours of interrogation. If the attack had been the other way around, and Palestinians would have infiltrated a Jewish school to attack teachers and students, the incident would have ended very differently.

Ignoring the violent acts committed by a hardcore group of settlers has had a snowball effect on what was once a localized phenomenon. Jewish residents commit attacks, and the soldiers stand off to the side. There has been no serious operation to arrest the perpetrators, no attempt to deal with the criminals and no pretensions of enforcing the law. Given that, it is only natural that routine attacks against Palestinians have quickly slipped into violence against Israeli soldiers. In most of those incidents, no arrests were made either. None were made after the most recent incident in Bat Ayin.

Instead of bringing those people who attack soldiers and Palestinians to justice, instead of arresting them and making them stand trial, the IDF and Israeli police have decided to impose sanctions on the entire settlement. The cessation of security is an act of collective punishment, intended to cause the settlers to expel the lawbreakers from their community. But the message that the settlers actually received is different. The IDF and the Israeli police are afraid to come into conflict with the criminal element, so instead they punish settlers who were not involved in the incident.

Did anyone try to bring the settlers who attacked the elementary school in Jalud to trial? Did anyone send an elite unit into Bat Ayin to arrest those people who attacked the Palestinian driver? The answer is no. Central Command preferred to withdraw its security forces from the settlement for a set time. But they will be back: tomorrow, the next day, in two weeks at most. In the Wild West, the strong make the rules. In this case, the strong are not the IDF but the people who have proven time and again that they have a much greater power of deterrence: the settlers.