Attacks by Salafists in Egypt are escalating as they did in Tunisia. Even more ominous, reports Mohannad Sabry for Al-Monitor, they aren't being met with resistance by the new government as they once were under the Mubarak regime. 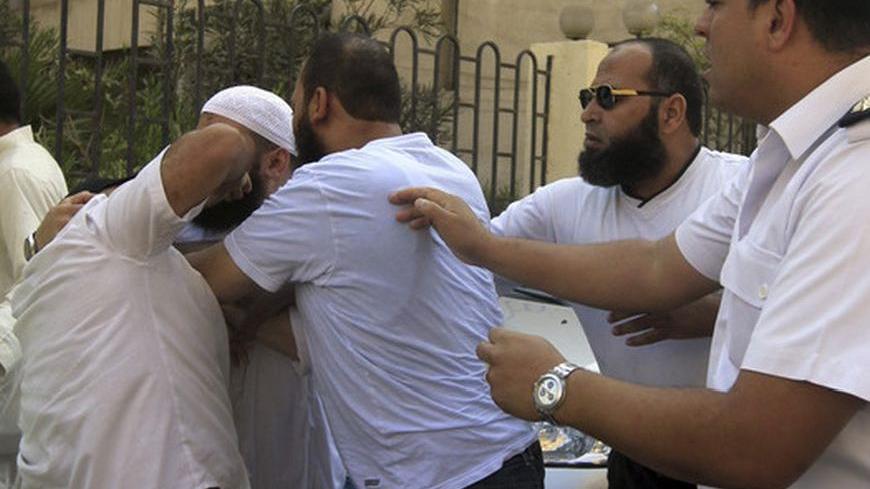 A police officer (R) tries to break up a scuffle between two Egyptian hardline Salafists and a Coptic Christian man (L) outside the courthouse in Cairo, Oct. 14, 2012 - REUTERS Mohamed Abd El Ghany

CAIRO — Attacks by hard-line Salafist Muslims have raised concerns that Egypt may be in store for even more violence, similar to that witnessed this week in Tunisia.

Both Arab nations were ruled by ironfisted dictatorships for decades, led the Arab Spring and witnessed an unprecedented rise of Islamists to power.

In Upper Egypt’s Menya governorate, dozens of Salafists protested and forced the cancelation of a musical concert on Sunday, Oct. 28. The concert, “National Unity,” was organized by a local Egyptian band called Egypt’s Heart and sponsored by Menya’s governor and security chief — who were scheduled to attend if the state-owned events hall hadn’t been surrounded by furious, bearded Islamists.

Egypt’s Heart is composed of dozens of Muslim and Coptic Christian singers and musicians, and is known for incorporating religious hymns in their songs and advocating national unity.

But the self-proclaimed Islamist group, The Salafist Call Youth in Menya, said the concert was an event organized by Coptic Christian missionaries, who were singing Coptic hymns. The group’s Facebook page, which says “they are not representative of the Salafist current or its political parties,” published a video on the thinking behind forcing the shut-down of the public event.

“Egypt’s Heart is a group of Coptic Christian youth, which aims to unite Copts against we don’t know who, they try to exist among Muslims with claims of national unity,” said the video. “Why do they sing Coptic hymns that contradict Muslim beliefs? And why does a priest recite Coptic prayers during their event?”

Attendees, who were evacuated through a back door, had a different view.

“They passed out flyers saying that singing is a major sin, and when people didn’t react, they claimed it’s a missionary event and started threatening that the event would be canceled,” said Alaa Kabawy, a Menya resident and member of the April 6 Youth Group, which played a major role in Egypt’s January 25 uprising in 2011.

Kabawy says the incident was sparked by a dozen protesters that soon became around 300 Islamist men inside and outside the event hall. “They were chanting 'Islamic, Islamic, Egypt is Islamic,'” he said.

Half an hour after the national unity show started with songs containing both Islamic and Coptic verses, Menya’s security chief, Mamdouh Mekled, ordered the immediate cancelation. Al-Monitor’s calls to the governor, security officials and the Salafist youth group went unanswered.

“Authorities surrendered to violators instead of protecting the event they sponsored in the first place,” said Kabawy, who is now organizing a bigger musical event in cooperation with political parties and youth movements. The coming event is set for December; Egypt’s Heart will be the main performers.

“Those incidents are very similar to the 1990s, when we were terrorized by radical Islamists and suffered their violence for years,” said Kabawy, referring to deadly attacks led by Egyptian Islamists across the country that continued until the Luxor massacre in 1997, which claimed the lives of 58 foreign tourists and four Egyptians. A crackdown by Hosni Mubarak's government on Islamist groups put an end to the bloodshed.

“This could be the return of Islamist militias enforcing their ideology of enjoining the good and forbidding the evil. It’s a reminder of Upper Egypt’s terrible past,” he said.

Meanwhile, in Tunisia, bloody confrontations broke out between security forces and Salafist Muslims who, coinciding with Egypt’s Menya events during Islamic holidays, attacked alcohol merchants in the district of Manouba, west of the capital, Tunis. The attackers vandalized shops and allegedly cut off a merchant’s fingers as punishment for what they consider a sin. President Moncef Marzouki extended the state of emergency for three months after clashes left two Salafist attackers dead and injured three security officers.

Recent clashes in Tunisia between radical Islamists and the post-revolution Islamist president and government took place after a chain of attacks on bars, cafes and lodges, as well as singular incidents across the country, which were led by Salafists claiming to be enjoining the good and forbidding the evil.

Several Egyptian political parties and human rights organizations severely condemned the ongoing violations of public and personal rights, and voiced their deep concerns that Salafists are leading the country down a similar road as in Tunisia. Egypt’s government continues to be blamed for its weak reaction, which could encourage extremists.

Egypt’s Popular Current, a political front formed by several Nasserite and leftist parties, said that “canceling the Menya event by government officials is a surrender of the state’s authority in the face of a pro-government current,” referring to the protesting Islamists. “The security’s surrender in the face of such a threat will give this current a green light to use violence in similar incidents.”

The Arab Network for Human Rights Information, ANHRI, published a statement calling on “civil society organizations and political powers to adopt a clear position from this fact [Menya’s incident] and its similarities, in particular, as the recent period has witnessed a semi-organized campaign against the civil pattern of the state and threatens to suppress the basic rights and freedoms of the citizens.”

Tamer Mowafi, head of research at the Cairo-based ANHRI, told Al-Monitor that “Egypt is actually facing what is worse than the acts of violence witnessed in the 1990s.”

“Back in the 90s, Islamists were in full dispute with the government and accordingly adopted violence against it,” said the human rights researcher. “Now they feel empowered by the Islamist president and government that so far has done little to curb their violations.”

“We are walking down the same path as Tunisia, on both the government level and the level of Salafist Islamists committing the violations. I believe that similar beginnings lead to similar results,” explained Mowafi, who compared what Egypt is witnessing with what Tunisia underwent a few months ago.

The problem, according to Mowafi, is the government’s attitude in approaching such issues. It could be weak and empowering of such acts, which will encourage more frequent and bloodier events and, eventually, violent confrontation will take place between the government and Islamists.

“Given the geography, history and size, Egypt is poised for a worse situation than Tunisia if the government doesn’t take immediate action,” said Mowafi.

Mohannad Sabry is an Egyptian journalist based in Cairo. He has written for McClatchy newspapers and The Washington Times, and served as managing editor of Global Post's reporting fellowship, "Covering the Revolution," in Cairo, as well as a contributor to its special reports, "Tahrir Square" and "Egypt: the military, the people." Sabry has also worked as a field producer for several TV news shows, including PBS NewsHour and Frontline. Born in Saudi Arabia and raised around the world, he returned to Cairo in 2001 and has been covering Egypt since 2005. @mmsabry