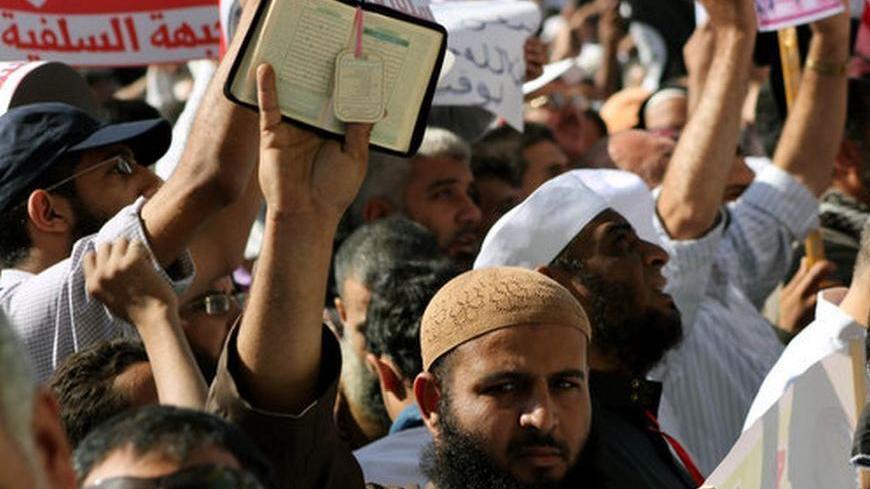 An Islamist protester holds the Quran during demonstrations in Cairo demanding an Islamist constitution for Egypt on Friday, Nov. 9. - Mohannad Sabry

CAIRO — Unlike other protests organized by Egypt’s Islamist currents, the Muslim Brotherhood’s Freedom and Justice Party and the Salafist Nour Party, who dominated more than 70% of the 2011 parliament, announced boycotting the protest and left Tahrir Square with several thousand protesters demanding a puritanical Islamic constitution.

Sheikh Mohamed Al-Saghir, the Islamic Group’s prominent cleric and top officer of its political Building and Development Party, led the Friday sermon by fiercely criticizing “liberals and democrats who oppose the application of Islamic Sharia.”

“They are executing plans that are drawn for them, obeying whatever orders they receive,” the sheikh’s accusations echoed across Tahrir Square.

“We will never be ruled by anything other than the laws of Allah’s,” Abbod Al-Zomor, the group’s leader who was jailed for 30 years for planning the assassination of former President Anwar Sadat. “We are willing to sacrifice for the sake of applying Islamic Sharia.”

But absence of the Salafist Nour Party and the Muslim Brotherhood’s Freedom and Justice Party, whose leaders dominate more than 50% of the constituent assembly currently drafting Egypt’s constitution, highlighted the growing divisions between Islamist currents. Scores of protesters condemned the decision to boycott the Friday of Implementing Shariah.

“I am shocked that the Muslim Brotherhood and Nour Party did not join us today,” said Mohamed Rizk, a 38-year-old merchant from Upper Egypt’s Menya governorate.

“They proved that they are only seeking to remain in power, even if it means giving up the application of Islamic Shariah and satisfying those who want to turn Egypt into a secular state,” said Rizk.

Rizk, who traveled around 200 miles to take part in the Friday protest, says the second article of constitution should clearly state that “Islamic Shariah is the main and only source of legislation.” He strongly refused the current draft which indicated “principles of Islamic Shariah are the main source of legislation.” He rushed to sign a petition calling for the amendment of the second article of the constitution.

Sheikh Abdalla Badr, a prominent cleric called on “Islamist powers to unite for the application of Islamic Shariah against liberals and seculars who call for absolute freedoms.”

“Seculars will never rule again,” Badr lead the chants from the main stage.

The boycott decision by the Muslim Brotherhood and the Salafist Nour Party was cheered by other liberal parties.

“The decision reflects that both parties weren’t influenced by smear campaigns against civil parties and figures who call for a constitution that represents a democratic state,” Ahmed Said, chairman of the liberal Free Egyptians Party, said in an official statement.

“The Freedom and Justice Party and Nour Party realized through dialogue with liberal figures that they are not against the laws of Allah but are seeking a constitution that will unite Egyptians.”

Throughout the day, leaflets handed out by members of the Islamic Group carried the logo of its political arm, the Building and Development Party, and listed reasons why Islamic Shariah is in danger.

“Seculars, liberals and leftists want Islamic Shariah to be nothing but a décor within the constitution. They insist on the equality between men and women without abiding by Islamic laws, refuse to restrict freedoms by Islamic and cultural manners, insist on upholding international treaties that allow sexual freedoms, homosexuality, same-sex marriage and other issues that contradict Islamic Shariah.”

After listing the threats, the Islamic Group announced establishing the Coalition for Protecting Islamic Shariah.

“This coalition will run for the coming parliament and establish its own media and television channels,” said Assem Abdelmaged, top officer of the Islamic Group.

“I am warning the Freedom and Justice Party and the Salafist Nour Party not to follow the liberal and seculars within the constituent assembly. Islamic Sharia will be the only source of legislation.”

“The liberals and seculars are conspiring against you,” Abdelmaged addressed the boycotters.

Mohannad Sabry is an Egyptian journalist based in Cairo. He has written for McClatchy newspapers and The Washington Times, and served as managing editor of Global Post's reporting fellowship "Covering the Revolution" in Cairo as well as a contributor to its special reports "Tahrir Square" and "Egypt: the military, the people." Sabry has also worked as a field producer for several TV news shows including PBS' "NewsHour" and "Frontline." Sabry, born in Saudi Arabia and raised around the world, returned to Cairo in 2001 and has been covering Egypt since 2005.