Mohannad Sabry gives a first-hand report on the violent confrontations precipitated by supporters of Egyptian President Mohammed Morsi against those protesting him. 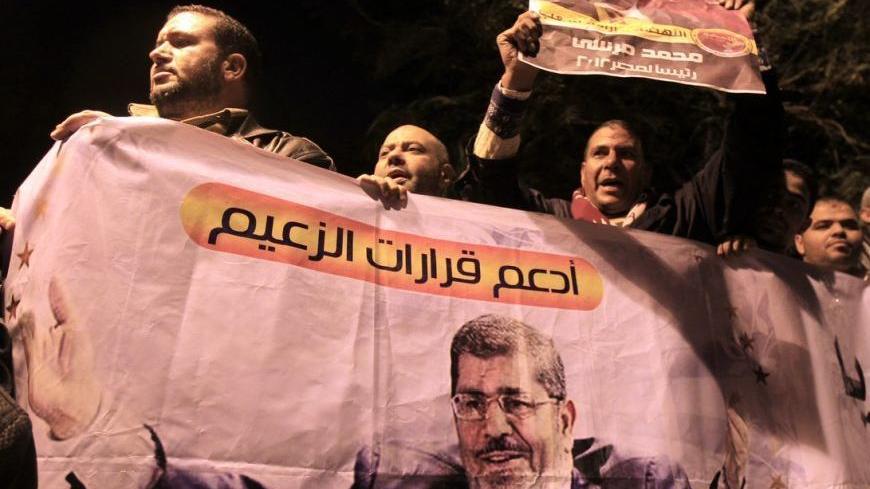 CAIRO — Hundreds of Islamist supporters loyal to President Mohammed Morsi attacked opposition demonstrators who had gathered to protest Morsi’s recent actions, including the assumption of sweeping executive powers, triggering the worst political crisis in the country since the revolution which overthrew President  Hosni Mubarak.

Armed with metal pipes, thick tree branches and an unending supply of fist-size rocks, the attacking crowds chased their opponents down the main boulevard stretching in front of Egypt’s presidential palace.

The anti-Morsi crowd, mostly men, 18 to 35 years old, fell back while throwing rocks and shooting firecrackers at their assailants, who were chanting “God is Great” as they attacked.

Wednesday night's violence, which left more than 200 injured according to the Ministry of Health, was instigated for the second time by a few thousand Morsi supporters, who marched to the presidential palace following a call from the Muslim Brotherhood movement.

“The Muslim Brotherhood and popular forces called for demonstrating at the presidential palace on Wednesday to protect the legitimacy after tyrannical violations committed by some yesterday,” a statement by the Muslim Brotherhood’s official spokesman Mahmoud Ghuzlan said describing tens of thousands of opposition members who demonstrated in front of the presidential palace on Tuesday.

“It imagined it could dazzle legitimacy or impose its opinion by force, which forces popular forces to gather and show that Egyptians are the ones who chose the legitimacy, elected it, and is capable, by Allah’s will, of protecting it,” said Ghuzlan’s call that was published despite a strike held by opposition members since Tuesday night.

Opposition strikers who were brutalized by Morsi’s Islamist supporters told Al-Monitor that their assailants arrived armed and ready.

“A few thousand of them attacked all of our tents at around 4 p.m. They were armed with electrical tasers, batons, metal pipes, and rocks,” said Ahmed Mahmoud, a 35-year-old protester whose forehead continued to bleed after receiving a baton blow from an attacker he described as a “bearded, old, merciless man.”

Mostafa Essam, a 27-year-old, headed to the strike in front the palace in support of his fellow opposition members after the Muslim Brotherhood’s call. He wrapped his scarf around his palm that was sliced open during the clashes. “An older man ran toward me, hit me with a dagger without talking, warning, or even cursing,” said Essam, while he waited for his cut to stop bleeding before “heading back to retaliate.”

Several of those who retreated and armed themselves with tree branches and rocks attacked busses and cars carrying or driven by bearded men.

As the attack on the strikers continued, President Morsi’s adviser Mahmoud Mekki spoke on behalf of the presidency through state television, saying: “We are keen on submitting to the popular will and holding the constitution referendum as scheduled on Dec. 15.”

“Mobilizing masses against masses will never solve political disagreements,” said Mekki whose official remarks failed to sway thousands of Morsi supporters from staging their demonstration at the opposition’s strike arena in front of the Eastern Cairo presidential palace.

At least four of Morsi’s advisers announced their resignations.

“Members of the advisory council and I exerted huge efforts to try to convince President Morsi to withdraw his constitutional declaration but he didn't listen to us,” Ayman Al-Sayyad, a member of the presidential advisory board, told a local cable channel after resigning.

As the front line shifted with a powerful pro-Morsi attack, several protesters took refuge at a residential building while the doorman picked up a broom stick, led the women into the wide, marble-floored lobby, commanded the men to seal the thick-glass gate and rushed up the stairs to ask residents for water, gauze, and a bottle of vinegar to fight off the effects of tear gas canisters shot from the opposition side at the pro-Morsi crowds.

Abanoub Makram, a 22-year-old Coptic Christian, limped toward the gate with a shredded sweater and a bruised face.

“Hide me, hide me, they are chasing me,” Makram begged as two other injured Salafists pushed the gate and asked for refuge.

Four men volunteered to help but dictated their terms: “If you talk politics we will throw you back out, there are no sides to be taken here.”

Terrified and trembling as he sat on the floor, Makram told Al-Monitor how he was rounded up by dozens of furious pro-Morsi protesters when he and a few of his friends failed to retreat to the opposition side.

“They cornered us and went through our pockets, took our wallets, phones and continued to beat us,” said Makram. “One man yelled that we are Copts and everyone started throwing punches and kicks,” said Makram as he covered the cross tattoo on his wrist. “I squeezed through then and started running, I don’t know what happened to my friend.

“I am terrified. If they catch me again they will kill me.”

Mohannad Sabry is an Egyptian journalist based in Cairo. He has written for McClatchy Newspapers and The Washington Times, served as managing editor of Global Post's reporting fellowship "Covering the Revolution" in Cairo as well as a contributor to its special reports "Tahrir Square" and "Egypt: the military, the people." Sabry was nominated to the 2011 Livingston Award for International Reporting. Born in Saudi Arabia and raised around the world, Sabry returned to Cairo in 2001 and has been covering Egypt since 2005. Follow him on Twitter: @mmsabry.