In Cairo, Battle Lines Are Drawn Between Islamists and Liberals

An increasingly violent divide is emerging between supporters of the Muslim Brotherhood in Egypt and liberal and secular groups, Maggie Fick reports. More than 100 protesters were injured Friday in clashes between the two groups during Tahrir Square demonstrations marking President Morsi's first 100 days in office. 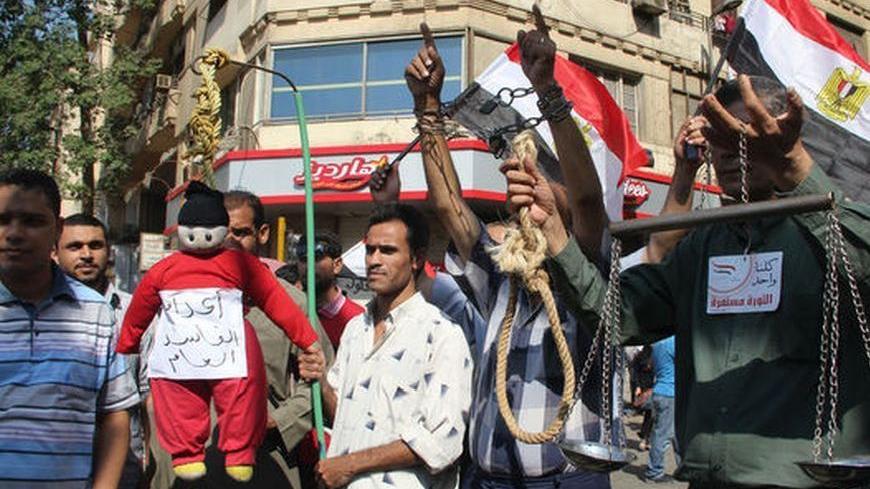 Protesters call for reform of Egypt's judiciary in Tahrir Square in Cairo, Oct. 12, before violence broke out between rival camps. - Maggie Fick for Al-Monitor

CAIRO — When Egypt’s liberal activists began planning a demonstration to criticize President Mohammed Morsi’s failure to fulfill the lofty promises he set for his first 100 days in office, they had good reason to expect they would have Tahrir Square to themselves on a day they dubbed “Accountability Friday.”

Their vision of mobilizing once more in the square — this time in unity against Islamist control of post-revolution Egypt — did not materialize. The day ended with more than 100 injured after hours of clashes between the activists and Muslim Brotherhood members. It was the first incident of violence between the rival camps since long-time Brotherhood member Morsi took office in late June.

The dust is still settling after Friday’s clashes in Tahrir, but the basic sequence of events shows the current balance of power in the country. The struggle for Tahrir was another indication that the voices of Islamists are drowning out those of liberal activists seeking to be heard in Egypt’s still-rocky transition.

In the run-up to Morsi’s 100th day in power, opposition parties and liberal groups called for a “million-man march” on Tahrir aimed at rallying non-Islamist forces.

The liberal coalition released a statement last week expressing their core demand for Friday’s protest: changes to the the Constituent Assembly, a 100-member body responsible for drafting the country’s new constitution. Islamists form the vast majority of the assembly, which has been locked in the complicated process of drafting Egypt’s new constitution since June. Liberals want the assembly to be representative of all Egyptians.

The first partial draft released last week reflects the makeup of the assembly, with Islamic law enshrined as the basis of provisions related to equality between men and women.

As liberals attempted to rally their base for Friday’s protests, an Egyptian court announced the acquittal on Wednesday of 24 Mubarak regime loyalists who were on trial for organizing the infamous “Battle of the Camel,” one of the most violent moments of the 18-day uprising last year and an event that turned many Egyptians definitively against the Mubarak regime.

The verdict prompted the Muslim Brotherhood to call for its loyal supporters to turn out en masse “to express the people’s anger and frustration.”

The court ruling provided the Brotherhood with a timely chance to piggyback on a rally intended to criticize the president. They seized the chance to shift public attention away from discontent with Morsi to widespread resentment of the foloul — “remnants” of the Mubarak regime, which some say still exert influence over Morsi’s presidency to date.

In the group’s typically organized fashion, Brotherhood members — some arriving on buses belonging to the Freedom and Justice Party, the political arm of the Islamist movement — filed into the symbolic epicenter of Egypt’s popular uprising on Friday morning before the midday prayer.

Shouting “Morsi! Morsi!” some then attacked a stage erected by supporters of a new opposition party led by ex-presidential candidate Hamdeen Sabahi. Somewhat oddly, the mood calmed after the destruction of the stage, and Brotherhood supporters stuck around to continue their pro-Morsi chants, which mixed with their calls for reform of the judiciary and resignation of the prosecutor general.

“There’s corruption in the judiciary and Morsi is trying to clean it up,” said Hosam al-Ataf, a lawyer from the Nile Delta town of Monufia, who had responded to the Brotherhood’s call for supporters to come to Tahrir, and brought his 15-year-old daughter along.

“But those people are against Morsi. They are just causing problems for everyone,” he said, gesturing towards sporadic volleys of rocks flying back and forth on a side street off of the square, an early sign of the clashes that erupted later in the afternoon.

Although it was unclear who was behind the rock throwing at this point, some Brotherhood supporters milling in the square in the early afternoon evoked the “invisible hand” rhetoric deployed in the aftermath of the revolution by both the ruling military council and the Brotherhood to explain violent clashes between protesters and security forces.

“The people over there follow the old corrupt regime,” said Mahmoud al-Sheikh, an engineer, watching as a middle-aged man — his forehead streaked with blood — was helped toward ambulances parked nearby in anticipation of trouble.

When several thousand liberal activists marched into the square, the gathering quickly morphed into a pitched battle between the liberals chanting against Morsi and his Islamist supporters.

Rival chants quickly gave way to sustained rock-throwing and the ebb and flow of running street battles witnessed a year ago in the same spot when revolutionaries and state security forces deployed by the military battled for days.

Twitter buzzed with reports of injuries and one observer noted: “Reading that there’s a field hospital in #Tahrir made me shiver…” in reference to last year’s violence, when makeshift clinics were set up by volunteers to treat injured protesters.

Crouched on a side street off Tahrir during a lull in the fighting around sunset prayers, a dejected young man who would only give his first name, Mohamed, noted the obvious: Both the liberals and the Islamists were reacting violently to each other’s presence in the square.

“What’s happening now is destroying the country,” he said. “I wish Egyptians would think of stability and listen to our elected president,” saying that although he is not a member of the Brotherhood, he voted for Morsi because he could not vote for his rival, Mubarak-era former Prime Minister Ahmed Shafiq.

Others held Morsi directly responsible for the street violence.

“[The Brotherhood] is the new regime, they don’t want us to have a voice,” said Mohamed Saad, accusing Brotherhood supporters of bringing weapons into the square. “Morsi wants chaos on the streets and he sent his people to attack the revolutionaries.”

Saad noted the complete lack of security forces in the square throughout the day, saying that the Morsi government was controlling the situation through his supporters instead of deploying security forces.

Meanwhile, the Brotherhood publicly backed away from any involvement in the day’s violence, deploying its range of public-relations tools to spread its message. The official Twitter account of the Brotherhood’s English website declared: “We are not involved in #Tahrir clashes, and none of our members were there,” though this message contradicted a tweet from senior Freedom and Justice Party official Essam el-Erian, who directed the “youth … who went to Tahrir” to march to the High Court to continue their protest against corruption in the judiciary.

Aside from this minor PR slip-up, the Brotherhood managed to prove an important point on Friday in Tahrir: They have the ability to control political space and to dominate the discussion in the government and on the streets.

By quickly mobilizing and deploying its ranks, the Brotherhood derailed a liberal effort to protest against Morsi’s rule and drowned out calls by liberals for reform in the country’s crucial constitution-drafting process. Although the need for judicial reform is real, and is a widespread concern among Egyptians, Friday’s battle for Tahrir devolved from a political demonstration into an angry fight between two camps with starkly different visions for the future of Egypt.

Maggie Fick is a Cairo-based freelance journalist. She previously reported for The Associated Press from South Sudan, where she also wrote for Thr Christian Science Monitor and Foreign Policy. Follow her on Twitter @maggiefick