President Mohammed Morsi went on the offensive by declaring a referendum on the draft constitution on Dec. 15, Maggie Fick reports from Cairo. 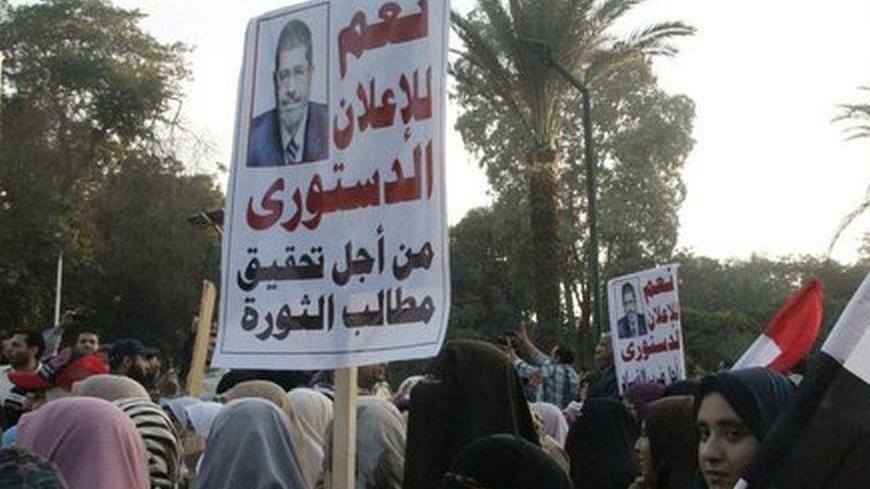 Women march at a rally attended by hundreds of thousands of President Mohammed Morsi's supporters on streets surrounding Cairo University, Dec. 1, 2012. The women are holding Egyptian flags and signs that read, "Yes to the constitutional decree as means of achieving the demands of the revolution." - AL-MONITOR/Maggie Fick

CAIRO — Massive rallies held in Cairo and across Egypt on Saturday in support of President Mohammed Morsi provided a boost for the president after a turbulent week of demonstrations following his move to tighten his grip on Egypt's political transition.

The Muslim Brotherhood, Egypt's most powerful political force, billed the large turnout as evidence of widespread popular support for Morsi and his recent decisions, which have widened the rifts between the president's Islamist supporters and their opponents.

While Saturday's rallies were evidence of substantial support for the president, they came against the backdrop of an ongoing sit-in against the president at Tahrir Square and did not change the reality of a deeply divided nation.

Despite the lack of consensus on issues central to Egypt's future — namely, the new constitution — the actions of the president and his Islamist allies over the past week indicate that they will continue to steer post-revolution Egypt with what some analysts have termed an "aggressive majoritarian approach." This approach lessens the chances of resolving the current tensions and foreshadows future confrontations as a vote on Egypt's disputed constitution looms.

Morsi's set of decrees on Nov. 22 put the president above judicial oversight, firmly established him as the sole driver of Egypt's transition to democracy, and blasted open the growing rifts in society nearly two years after Egyptians came together to oust authoritarian President Hosni Mubarak. Morsi's actions drew hundreds of thousands of protesters to Tahrir Square — the symbolic heart of the revolution — over the past week. Saturday's rallies were a strong response from the Islamist camp that showed that the president is still in control of his narrative, which casts him as the chosen, popular protector of Egypt's uprising amid threats to the country's fledgling democracy.

"Today's protests show that the Egyptian people support Morsi's decisions," Brotherhood spokesman Mahmoud Ghozlan told Al-Monitor. Adding that the "ballot box" was an answer to those that are questioning Morsi's approach, Ghozlan cited the electoral victories of the Brotherhood's Freedom and Justice Party and their Islamist allies in the series of presidential, parliamentary, and Shura Council polls held over the past year as proof of the Brotherhood's mantra that they speak for the Egyptian street.

Supporters that packed the streets around Cairo University, arriving in large marches on foot and on bus from a number of Egypt's governorates, had the same message. "I came to show that I support our elected president," said Sanaa Abdel Hamid, 56, a housewife from Cairo. "He was elected legally. I am one of his supporters, and we are the majority. Yes there are people in Tahrir, but we are bigger. That's democracy," she said

Nearby, a man with the long beard kept by some Brotherhood supporters and many of their more conservative Salafist allies balanced his two-year old son on his shoulders while his wife, wearing the niqab garment that covered all but her eyes looked on. "Our president is democratic, he is not a dictator because he was elected," said Ahmed Seif Al-Nasser, 40, an accountant from a Cairo suburb. "We want him to bring stability and a better economic situation but unfortunately there are many people who do not want to cooperate with him," he said.

This view meshes with a consistent stance put forth by Morsi and his supporters in the wake of his controversial decrees. It characterizes the liberal, Christian, and secular forces protesting Morsi's expanded powers as obstacles in the democratic process aimed at restoring stability and quashing unnamed elements aimed at derailing this transition.

With his announcement of a Dec. 15 referendum and the constitution and the accompanying rallies, the president has gone on offense against those protesting the rushed process and Morsi’s assumption of sweeping executive e powers.

Morsi declared that the constitution — approved on Thursday by the drafting panel after walkouts by secular and Coptic Christian representatives and fierce criticism by human rights groups — "is going in the right direction" and said that he called the referendum "out of keenness to build the nation's institutions without delay or stalling." The president acknowledged the "massive challenges ahead in the future internally and externally," but his words suggested that those who oppose the constitution — on grounds that it undermines basic rights — are preventing a return to stability and the building of a democratic system.

Morsi's careful words indicate that in spite of the dangers of an increasingly divided Egypt, he is staying the uncomprising course he charted with his decrees.

Shadi Hamid, director of research at the Brookings Doha Center, predicted that Morsi would emerge stronger from the latest round of political turmoil ignited by his power grab. Ironically, the result of the past week's crisis — a constitutional referendum — has provided a new opportunity for the president to bolster his democratic credentials. "The Brotherhood is rushing toward the referendum for a reason," Hamid told Al-Monitor. "They believe that it will give them an additional democratic mandate and that it will be a vindication of Morsi's decrees.

Hamid said that the referendum on the disputed constitution will be spun by the Brotherhood as a "vote for Morsi," despite the fact that the likely scenario of the constitution passing a popular vote with flying colors is merely an indication that there is no viable alternative given that Egyptians desperately need political stability for the sake of their livelihoods and economic security.

As Morsi prepares to claim victory when the referendum comes to a vote in less than two weeks, there is little indication that the president and his allies will soften their positions or truly engage with opposition forces to address their deep-seated concerns. "[The Brotherhood's] goal is not to reduce polarization, because it is there, embedded in the way the transition has been done," Hamid concluded. By steamrolling toward a constitution vote, the president risks delaying resolution of the core issues dividing the country — or further inflaming them.

Regardless of the outcome of the Dec. 15 referendum, Morsi's approach suggests that the latest crisis of Egypt's transition is far from over.

Maggie Fick is a Cairo-based freelance journalist. She previously reported for The Associated Press from South Sudan, where she also wrote for The Christian Science Monitor and Foreign Policy. Follow her on Twitter @maggiefick.