Referendum Will Divide, Not Unite, Egyptians

The referendum that begins Saturday on the Egyptian constitution will likely further divide Egyptians no matter the outcome, writes Maggie Fick from Cairo. 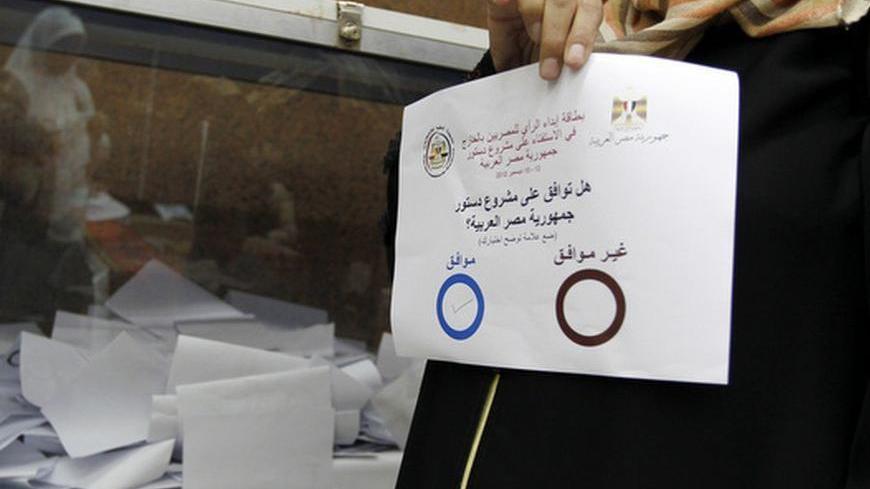 An Egyptian woman shows her vote on the new Egyptian constitution at the Egyptian consulate in Dubai, December 12, 2012. - REUTERS/Jumana El-Heloueh

CAIRO — Egyptians begin voting on Saturday in a referendum on a controversial constitution draft, which is meant to be a step forward in Egypt's post-revolution transition.

But the "yes" and "no" votes to be cast have taken on a significance that extends far beyond the act of approving or rejecting the constitution.

In the charged atmosphere surrounding the vote, whatever the outcome, the vote seems bound to be a catalyst for deepening divisions in the country.

In the three weeks since President Mohammed Morsi issued a decree dramatically increasing his powers, possible windows for compromise have opened at various moments. On the eve of the vote, all these windows are slammed shut.

Forces opposed to Morsi's recent actions say the president's entreaties for dialogue have not been made in good faith. Morsi's speeches and decisions since his initial Nov. 22 decree have served to further alienate the masses and rallied the opposition, which has taken to the streets in protest. The president's references to unnamed forces seeking to destabilize the country mirror the rhetoric of powerful figures like Khairat Al-Shater from the Muslim Brotherhood movement from which the president hails, leading some Egyptians to wonder if Morsi is being controlled by Brotherhood members more conservative than himself, such as Al-Shater and the "spiritual guide" of the movement's Egypt branch, Mohammed Badie.

In the more than three weeks since Morsi issued his decree, Egypt has witnessed a flurry of bewildering political developments announced at all hours of the day and night, a deadly street battle outside the presidential palace, days of huge rallies for and against the president and a judiciary in revolt against his actions.

The result is a climate which could hardly be less ideal for the referendum vote. Just as the referendum itself is no longer merely a mandate on the constitution, the heightened stakes and high tensions guarantee that the result will have far-reaching consequences for stability and unity among everyday citizens.

“One way or the other, different sides are going to interpret the vote in very different ways," said H.A. Hellyer, a nonresident fellow at the Brookings Institution. If the referendum passes, Hellyer said, "the Brotherhood will use that to indicate support not only for the constitution but for President Morsi." Conversely, if the constitution is rejected, Hellyer said that "the Brotherhood will blame the opposition, but will insist that the president's popularity is not affected." In this case, Hellyer said the opposition would interpret the result as a public rejection of Morsi and the Brotherhood.

Either way, Hellyer told Al-Monitor that the results of Saturday's vote will not indicate the motivations behind voters who approved or rejected the constitution. He said that while some people will vote "yes" because they wish for stability, others will approve the constitution on the notion that it is "against Islam not to vote for it." He said that those who are voting based on the "actual merits of the articles of the draft" will be a "tiny minority."

"I do think there are elements within the President's supporters who are trying to make this seem like a referendum on Islam, which I think is very dangerous. Ninety-seven percent of this country thinks that religion is important on a daily basis, and 80 to 85% of Egyptians are actually Muslims. To turn this [process] into that sort of dynamic is quite poisonous, and potentially dangerous."

Brotherhood officials have also portrayed approval of the referendum as a necessary step toward stability and as a path out of the political crisis sparked by Morsi's decrees. The Associated Press quoted Gehad el-Haddad, a spokesman and senior advisor for the Brotherhood and for its political arm, the Freedom and Justice Party, making this argument: "We want to have a constitution in place because it's a pillar of a functioning state. The fact that it is lacking encourages a lot of people to resort to undemocratic means."

The stability argument holds weight given the dire economic straits Egypt has faced through its post-revolution transition, even more so in light of the past few weeks of political turmoil. Within 24 hours of an announcement to up taxes on goods like cigarettes and cooking oil, Morsi reversed the decision, citing the need for public discussion to determine whether increased taxes have popular support. Experts say the government has no choice in the longer term but to adopt such austerity measures, given that they are part of a pending agreement on a $4.8 billion International Monetary Fund loan. Egypt delayed its request for the loan's approval this week after announcing the tax increases would be postponed.

Those opposed to the constitution resent that its approval has been linked to Islam and stability. Although opposition forces including the National Salvation Front coalition initially considered a boycott of the Dec. 15 referendum, they announced on Tuesday that they would campaign for a "no" vote. This effort lags behind that of the Brotherhood, which is well into its own outreach to convince Egyptians that a "yes" vote will end the current crisis.

Khalid Abdalla, of the local film collective Mosireen, said that the group launched their own referendum-information campaign "out of pure necessity."

"We are working on videos related to the poison in the constitution," he told Al-Monitor. "We are attacking the propaganda that the Muslim Brotherhood and their various engines are using," he said.

Some of the videos posted on Mosireen's referendum-related YouTube channel begin with the Egyptian eagle emblem and a satirical twist on the "Know your Constitution" phrase used frequently in "yes"-vote campaign: The narration intones, "Know their constitution before it makes a mark on you," and then references various torture and abuses, including sexual harassment.

"What's happening is [we] have a constitution which is forced on the country and which we only know the final shape of it two weeks before the referendum," Abdalla said. The videos are not all satirical in nature; many feature interviews with experts explaining popular misconceptions about the draft, related to issues such as worker's rights.

On Friday, the front page of the prominent Egyptian newspaper Al-Masry Al-Youm featured photos of military vehicles lining Cairo streets "in preparation for the "battle of 'yes' and 'no.'"

This "battle" is continuing to play out on Egyptian streets, with supporters and opponents of Morsi and the constitution organizing rallies the day before the vote to make their respective "yes" and "no" calls heard to the public.

Although large demonstrations and marches have dominated the past few weeks, the battle over Egypt's future is also taking place inside homes, mosques, on talk shows and at universities. One Egyptian woman who did not want to be named told Al-Monitor that she has found herself in emotional, often angry debates with her friends, colleagues and relatives over the vote. She said that she had not yet decided how she would vote on Saturday, but that her conflicted feelings about her decision were linked to the way in which religious leaders and Brotherhood officials have shaped the public debate.

"The battle is between haram and halal," she said, referring to Muslim concepts of what is permissible based on the Quran and the Prophet Muhammad's teachings and traditions.

Meanwhile, the practical business of carrying out the referendum has also suffered. Given that most judges have refused to supervise the monitoring of the vote, Morsi has announced that the referendum will be held in two stages, with 10 governorates voting on Saturday, and the remaining governorates on Dec. 22. The Carter Center announced on Thursday that it would not monitor the process, saying in a statement that the late release of election-monitoring regulations precluded the group from conducting a comprehensive assessment of the process. Earlier this week, Morsi put the army in charge of maintaining security throughout the country, suggesting his government's concerns over the tense environment in the run-up to the vote.

Maggie Fick is a Cairo-based freelance journalist. She previously reported for The Associated Press from South Sudan, where she also wrote for The Christian Science Monitor and Foreign Policy. Follow her on Twitter @maggiefick.