Conversations with voters in Egypt's second-largest city showed the constitutional referendum is about more than approving or rejecting the controversial document, Maggie Fick reports from Alexandria. 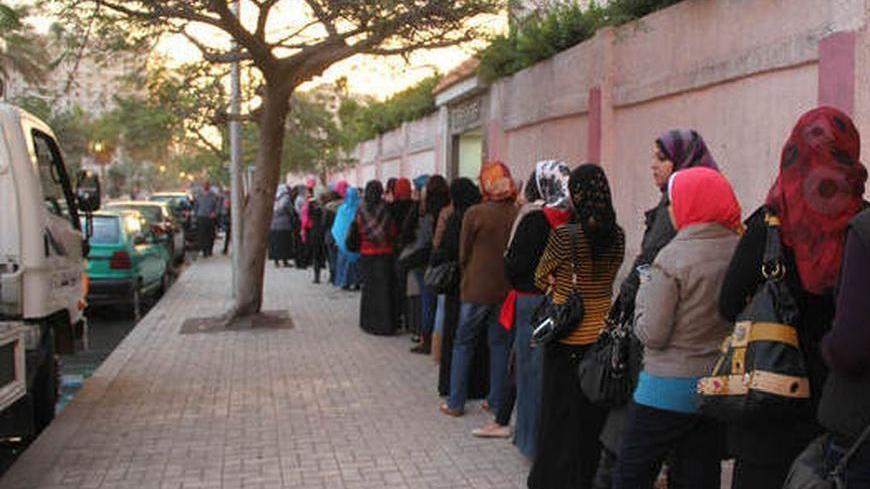 Women wait in line at a polling station in Egypt's second-largest city of Alexandria on Saturday, Dec. 15, during a referendum vote on a hotly contested constitution draft. - Maggie Fick

ALEXANDRIA, Egypt — In line at polling stations, on tram cars and minibuses, and at cafes and corner shops, residents of this Mediterranean city discussed the controversial constitution that went to a vote Saturday in 10 of Egypt's 27 governorates. Heated debates showed the lack of consensus among voters on the charter. Strong opinions expressed by these voters also indicated the extent to which some view the constitutional referendum — and the broader struggle over Egypt's identity — as a zero-sum game.

Fittingly, conversations among residents of Egypt's second-largest city were not just about the constitution itself, but also about President Mohammed Morsi's approach to steering Egypt's political transition; about the role of the Muslim Brotherhood — from which Morsi hails — in politics since the 2011 revolution; and about how the worst turmoil to hit Egypt in the nearly two years since its popular uprising can and should be ended.

Alexandria is home to strong contingents from all of the political forces that have vied for power during Egypt's tumultuous transition.

The city was home to Khaled Said, a young man who died in 2010 after brutal beatings by police officers. His story became a rallying cry for Egyptians calling for an end to torture by security forces, among other demands, in the 2011 revolution.

It is also the hometown of prominent Brotherhood members including Essam al-Haddad, Morsi's national security adviser and a member of a Brotherhood delegation that visited Washington earlier this month to meet with US officials. Al-Haddad's son is also a Morsi adviser and a Brotherhood spokesman who strives to present a rosy view of the Islamist group in the Western press. The still more conservative Salafi brand of Islamism also has deep roots in Alexandria.

Meanwhile, mosques and Coptic Christian churches are found on the same streets and a downtown synagogue is a reminder of the Jewish community that once thrived here.

As in Cairo, divides between rival political forces in Alexandria have deepened in the aftermath of Morsi's Nov. 22 decree, which expanded his powers and sparked the past three and half of weeks of protests, street battles, and Saturday's rushed vote on a disputed constitution draft. The week after Morsi issued his decree, protesters burned an office of the Brotherhood's Freedom and Justice Party in Alexandria. Large anti-Morsi rallies and marches have taken place here in the run-up to the referendum.

The day before voting began, a conservative cleric at the Qaed Ibrahim mosque near Alexandria's picturesque seaside Corniche advised worshippers at Friday prayers to vote in favor of the constitution. The remarks led to street fighting between opponents and supporters of the constitution and the president. Photos published by the Egyptian daily Al-Watan showed men with beards fashioned in the trademark style of ultraconservative Salafi Muslims brandishing axes, swords, and metal pipes facing off against anti-Morsi protesters. Reuters reported that the opposition protesters later returned to the mosque, preventing the cleric who had delivered the sermon that had proved inflammatory from leaving the mosque until after midnight. On Saturday, stones littered the streets surrounding the mosque while municipal workers swept up debris from the fighting. On an administrative building affiliated with the mosque, graffiti read "no to the constitution" and "no to the Brotherhood."

Looking at the photos on the front page of Al-Watan on the morning after the clashes and after she had cast her vote, social worker Mona Amin dismissed the photos as "propaganda." She said that men who appeared to be Islamists were actually liberal "thugs" hired by what she called the "Devil's Triangle." Amin explained that the term referred to Mohamed ElBaradei, Amr Moussa and Hamdeen Sabahi — three prominent opposition politicians who formed a new coalition, the National Salvation Front, to protest Morsi's Nov. 22 decree and subsequent handling of Egypt's still-spiraling political crisis. "They were each paid 500 pounds!" another woman added to Amin's account, saying that "remnants" of the old regime were involved in the effort to malign Islamists in one of their most powerful strongholds in the country.

Amin, who was wearing the niqab, a garment that covers all but the eyes, said she had just voted in favor of the constitution. "People are tired, they just want to live in peace and have food to eat. We all want stability," she told Al-Monitor. Overhearing Amin's comments about Friday's clashes, a shopkeeper interjected to say that she should go to the hospital and see for herself that the injured were anti-Morsi protesters. As the two started to disagree over Friday's events, another man walked over to say that everyone should calm down. "She is saying 'yes' and I'm saying 'no,' Egypt is like this," the shopkeeper said as Amin walked way.

Earlier, at a newspaper stand near the polling station where Amin cast her vote, a man pointed at the same Al-Watan photos. Shaking his head at the images of men wielding weapons, he exclaimed: "They are not us!" "God help us," the man selling the papers said. He had pinned up copies of Freedom and Justice, the official paper of the Brotherhood's political arm of the same name. The front page read "Yes to the constitution," and featured a checkmark in the blue circle, mirroring the ballot, which features a blue circle and the "agree" choice next to a red circle corresponding with "don't agree."

On a car designated for female passengers of the city's public tram system, strangers chatted. "Islam says we are free," one woman said to another. "Am I an infidel if I vote 'no'?" "No," another pitched in. "Everyone is free. What's wrong with them?" she continued, referring to the Brotherhood: "They say, 'if you vote 'yes' you go to heaven and if you vote 'no' you go to hell'."

In the working class neighborhood of Moharam Bek, a woman who did not want her name printed stood with her daughter and laid out her reasons for casting her vote in favor of the constitution. "I read the constitution and I like the articles referring to social services and the role of women. Also, if the constitution does not pass, we have to start from the beginning again. It could take another year before we have a constitution and we still need to elect a new parliament. We need to move forward."

Mina Farag, a 20-year-old university student studying art, stood in a line that wrapped around a city block in the upper-middle class neighborhood of Smouha on Saturday afternoon.

Farag said that since Morsi took office in June, many people have seen the Brotherhood showing their "true colors." As for the arguments made by those pushing a "yes" vote in the name of stability and in the name of Islam, she shot them both down. "Sooner or later things are going to be more unstable because of this constitution. And it doesn't have anything to do with Islam to vote 'yes'."

Although voters lined up and waited patiently at stations across the city, few people interviewed by Al-Monitor had positive outlooks on what the results of the referendum— which will not be complete until after the Dec. 22 vote by the remaining 17 governorates — would bring.

"There was unity during the January 25 revolution," said Hisham al-Kady at a polling station nearby. "But after the Brotherhood came to power, they divided people into two groups. There has already been violence."

Osama Moftah, a civil society and governance researcher from Alexandria, told Al-Monitor that the atmosphere of Saturday's vote in his hometown differed from the parliamentary and presidential polls held earlier this year and last year.

"In the (recent) elections, people had more hope. They felt they could play a role in politics. But in this referendum they feel that the game is over. They are just voting to minimize the losses. No one has a bright view. It is like they are doing a heavy duty."