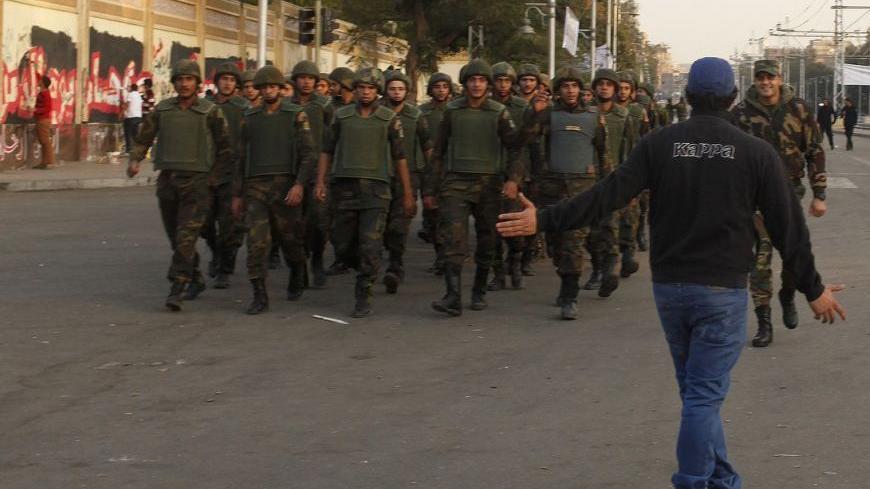 CAIRO — Egypt's opposition coalition reaffirmed its rejection of the Dec. 15 referendum on a disputed constitution draft and rallied their supporters for protests in Tahrir Square and in cities across the country on Tuesday, saying in a statement Sunday night that dialogue with President Mohammed Morsi was impossible given the president's decision to hold firm on the referendum date.

A National Salvation Front spokesman read a statement at a news conference, saying the group, which includes Egypt's most prominent opposition figures, was ready for dialogue if the president agreed to cancel the referendum. The coalition also pledged to lead a widespread civil disobedience campaign of strikes by various labor forces that would "paralyze the economy." While they reiterated their stance that they were treating Morsi as the elected president, they also warned that his uncompromising stance was leading the country toward civil war.

The president's move to rescind his Nov. 22 decree — announced around midnight Saturday — did not satisfy the opposition's main demand: the cancellation of the Dec. 15 referendum. Nearly all of the groups protesting what they say is a power grab by Morsi had boycotted the Saturday dialogue meeting convened by the president for the same reason, saying that negotiation was not possible given the president's decision to hold firm on the referendum date.

Also on Saturday, Egypt's military made its first public comment on the political crisis. A statement read by an unnamed military spokesman was interpreted by many as the military's decision to re-insert itself into the political scene for the first time since the president pushed them aside in August, ordering top officers into retirement and canceling the constitutional declaration that had established the country's most powerful institution as the legislative authority after parliament was dissolved before Morsi took office.

The army's statement came shortly after Egypt's state newspaper Al-Ahram had reported that Morsi was preparing a law to allow the military to arrest civilians and help police secure "vital premises." The statement said that dialogue was the only way for Egypt to avert "disastrous consequences" and warned that any solution must not contradict "the rules of democracy."

On Sunday morning, the Republican Guards stood guard at the presidential palace while another layer of concrete blocks was added to a growing wall reminiscent of those erected on main thoroughfares leading into Tahrir Square during street violence over the past year in downtown Cairo. On Friday evening, two days after Morsi's supporters and opponents fought each other outside the palace, protesters removed barbed wire erected by the army and marched up to the palace walls, with some mingling with soldiers and others yelling that the army could not be trusted after it ran over citizens with tanks in October 2011.

By nightfall Sunday, thousands of protesters were marching toward the palace once more, shouting "leave!" and other slogans used against toppled president Hosni Mubarak during the 2011 revolution. Morsi's supporters were also back on the streets, chanting against "thugs" and in favor of the constitution.

Bitterly divided, Egypt is hurtling toward its referendum amid political crisis that shows no signs of abating, least of all on December 15, the scheduled date for the vote. Each day brings a slew of new developments which have thus far only fanned the flames and further entrenched two bitterly divided camps.

In the 2½ weeks since President Mohammed Morsi issued a decree expanding his powers, divides in Egyptian society that emerged after the 2011 revolution have deepened; it is now difficult to see past the fundamental split between Morsi's supporters (Islamists of various affiliations) and his opponents (a diverse array of "non-Islamists").

As Cairo-based writer Ursula Lindsey noted in a piece published Sunday on The Arabist blog, a decision from the opposition to accept Morsi's invitation to dialogue was made more difficult by the president's nationally televised address Thursday evening, in which he attributed the bloody violence outside his palace the night before to hired "thugs" and other unnamed forces seeking to sabotage the country. Statements by opposition groups and anti-Morsi activists Sunday made clear that Morsi's latest move — which some billed as "conciliatory" — did not address their concerns and demands.

Activist-writer Bassem Sabry explained in a blog post how the president's retraction of his decree did not amount to any real compromise: "The president had promised he would not subject the document to a referendum before national consensus was achieved … this is certainly not the case. Egypt is more divided than ever right now, and these are not the conditions wanted for what was hoped to be the first democratically made constitution in the history of the country."

Meanwhile, Prime Minister Hisham Kandil directed Egyptians toward the ballot box. Reuters quoted Kandil in a Sunday statement as saying, "The people are the makers of the future as long as they have the freedom to resort to the ballot box in a democratic, free and fair vote." He called for an end to the sit-ins and protests at Tahrir Square and outside the presidential palace.

Speeches on Saturday by senior officials from the Muslim Brotherhood from which Morsi hails echoed the president's rhetoric in his Thursday speech. Powerful Brotherhood deputy leader Khairat Al-Shater accused unnamed actors of seeking Morsi's overthrow and said his fundamentalist group would protect Morsi's legitimacy. Al-Shater said the Brotherhood would not be dragged into "sectarian strife," a comment that seemed to contradict photos and eyewitness accounts in which Brotherhood members fought with sticks, stones and saws against anti-Morsi protesters in Wednesday's bloody battles outside the palace.

The spiritual leader of the Brotherhood, Mohammed Badie, also spoke darkly on Saturday of destabilizing forces threatening Egypt's transition and urged citizens to respect institutions.  Badie said that the Brotherhood was only responding to aggression against its members, not initiating it.

The statements by government officials, Brotherhood members, and the army in the past 24 hours seem to amount to an insistence on dialogue and respect for institutions such as the ballot box as the means out of Egypt's spiraling crisis. Meanwhile, opposition members insist that real dialogue is not possible under the current conditions.

For his part, Morsi has not addressed the public since his Thursday address which emphasized his intent to push forward with the referendum vote on his timeline. The retraction of his earlier decree did not alter this stance.

With the referendum vote less than a week away, a path out of the current stalemate is nowhere in sight.

"I'm fearful of violence on the day of voting," said Khaled Fahmy, head of the history department at the American University in Cairo, told Al-Monitor. "The stakes are high, the country has never been as polarized, and we have gangsters in control of the country and of presidency."

Fahmy said that he expected Morsi's Thursday night speech to show his "readiness to act as the president of Egypt" by investigating orders by "senior members of the Brotherhood to the rank and file of their organization to authorize the use of violence in dispersing the crowd."

He said that the events related to the president's decree and the constitutional referendum are a "smoke screen" and a diversion from an attempt by the Brotherhood's most extremist elements to seize control of the country. "I have very serious doubts as to whether Morsi is in control of the presidency," Fahmy said. "I think the presidency as an institution has been hijacked."