Ben Caspit writes that one outcome of the Gaza conflict is that when Israel holds talks with Hamas through Egypt, it is by extension talking with Iran, which is funding Hamas and pulling its strings from afar. 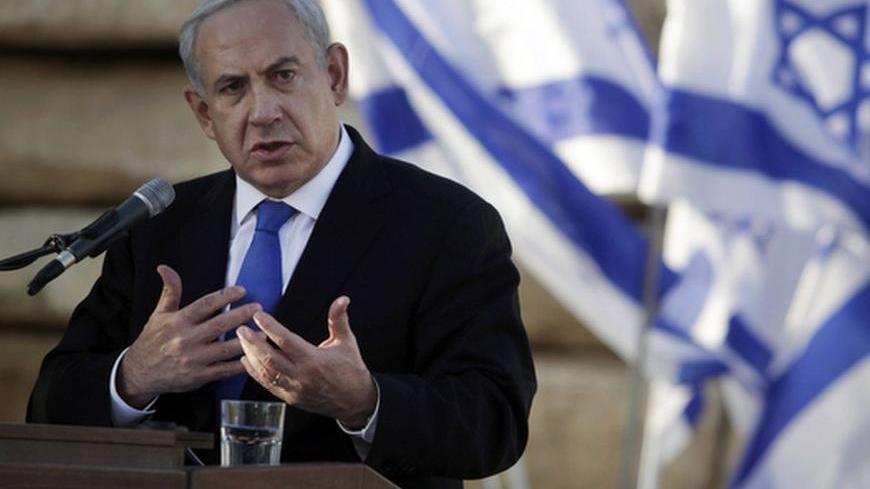 As these lines are written, another round of hostilities between Israel and the terror organizations in Gaza is nearing its conclusion. And once again, just as it was in past conflicts, the two sides have been firing like mad at each other and many were killed or injured.

Alas, both sides are still trapped in the same hopeless impasse. Hamas keeps stockpiling rockets and building legitimacy while Israel is buying another few months of quiet until the next round. The campaign began last week with a display of Israeli victory: the picture of the crushed and burning car in which Hamas’ military chief in Gaza, Ahmed Jabari, was riding. It was expected to end Tuesday evening, Nov. 20, with the Hamas victory shot: a direct hit by a Fajr-5 rocket on an apartment house in Rishon LeZion, a big city at the heart of Israel’s Dan metropolitan area, two minutes away from Tel Aviv.

Each side and its image of victory.

However, if we look more seriously at the geo-political situation in the days of Operation Cast Lead, we will see that it has fundamentally changed since then. In the course of that operation, launched at the end of 2008 under Israel's then-prime minister Ehud Olmert, Gaza was attacked from the air and invaded on the ground.

Ruling in Cairo at the time were then-president Hosni Mubarak and then-intelligence chief Omar Suleiman, who loathed Hamas even more than Olmert himself. At the time, Israel enjoyed unprecedented international legitimacy, mainly thanks to the generous peace offer Olmert put forward to Abu Mazen. And presiding in Washington back then was, still, George W. Bush, who gave Israel unlimited credit.

The conditions for overthrowing Hamas were ripe at that stage — just perfect. However, Olmert wavered and ultimately, his two senior ministers, then-defense minister Ehud Barak and then-foreign minister Tzipi Livni, forced him to shelve the “big plan,” make do with partial rehabilitation of the Israeli deterrence capability in the south and hastily pull back from Gaza ahead of the parliamentary election.

These days, Mubarak and Suleiman are no longer around. Suleiman passed away. Mubarak was ousted and sentenced to life imprisonment and is, anyway, as good as dead. And the Muslim Brotherhood is holding the reins in Cairo.

Only two years ago, such a scenario would have thrown the average Israeli into panic. Yet this supposedly alarming scenario has come true, and life goes on as usual. Not only is the Muslim Brotherhood currently in control in Egypt, the Islamic movement is now mediating between Israel and Hamas and acting as the responsible adult in charge in the region, just the way it used to be, implausible as it may seem.

The peace agreement endures; the cooperation between the Israel Defense Forces and the Egyptian army carries on as before. Egyptian President Mohammed Morsi lashes out against Israel from time to time — force of habit — but when it comes down to business, he delivers the goods. He is reaching out to both sides, trying to put out the flames and, above all, seeking to appease the sponsors of Egypt who are still seated in Washington.

When the dust settles, a number of incredible facts will come to light. First, the uncompromising rightist government of Israeli Prime Minister Benjamin Netanyahu and Foreign Minister Avigdor Liberman, which has been persistently threatening to attack Iran, accomplished in Gaza much less than the conciliatory, peace-seeking leftist government of Olmert, having given up and pulled back in a much shorter time. And another thing, no less amazing: When Olmert served in office as premier, no contact whatsoever was made with Hamas. Anytime Tzipi Livni as much as suspected that Israel was holding even indirect negotiations with Hamas representatives, she raised hue and cry. Israel talked then with the Egyptians and reached understandings through Egypt alone.

And now, with Netanyahu at the helm of the government, Israel is holding talks with Hamas — almost direct ones — contrary to his declarations on the eve of the recent parliamentary election that he would allow nothing of the kind once he assumed office as prime minister. He would simply enter Gaza and topple Hamas, just like that.

The ceasefire agreement currently under discussion is being negotiated face-to-face with Hamas. What’s more, the negotiations include Hamas' sister party — the Muslim Brotherhood in Egypt. And this time around, there is nobody to protest. Even Avigdor Liberman, the regional pyromaniac, has all of a sudden assumed a solemn diplomatic posture, explaining that “there can be no military solution” to the conflict. They are all talking with each other there, sending emissaries back and forth.

At least there are some small indications of sanity amid all the madness and bloodshed. It is as if the region were previously ruled by responsible adults — namely, Mubarak and Olmert — and once they disappeared from the scene, all the lunatics (the Muslim Brotherhood, Netanyahu, Liberman) were let loose. However, rather than charging head on, pitchforks in their hands, ready to attack each other, they are behaving in a surprisingly civil manner and even talking with each other.

When the dust settles, they in Jerusalem will realize, too, that they actually held negotiations with Hamas and nothing terrible happened. They are still alive. They will find out, if they stop for a moment to think, that the current regime in Cairo is not all that different from Hamas. After all, it is the same party, with the same ideology. And, wonder of wonders, the Cairo government is maintaining the peace agreement, even if with clenched teeth.

Under these circumstances, the regional paradigm, whereby Hamas is outside the game and the sole partner to peace talks is Abu Mazen while we wait for the moderates to join in, may no longer be relevant. Given the new scenario emerging in the region, the blockade on Gaza may yet be lifted. Who knows — at some point in the future, direct contact of some sort or another may be initiated. If Israel is talking with Morsi, why shouldn’t it start talking with Ismail Haniyeh?

And another thing: It is no secret that Iran’s clout on the Gaza Strip is boosted by the week. Iran is supplying Gaza with rockets, streaming funds and providing guidance, training and experts. Iran is also signing the checks. There is a Shiite-Sunni coalition there, set against Israel and the Jewish people.

All the same, the ongoing confrontation in the Gaza Strip does not only generate an exchange of fire. It also gives rise to contact between the sides. It is not a deluge — it hasn’t started raining yet, not even a trickle. But rain clouds may be gathering on the horizon.

When Israel is holding talks with Hamas through Egypt, it is in fact talking with Iran, which is funding Hamas and pulling its strings from afar. It may not even be the beginning of the end, as someone at one point said, but it is, perhaps, the end of the beginning, as we all may someday realize.

Ben Caspit is a senior columnist and political analyst for Israeli papers. He has a daily radio show and regular tv shows on politics and Israel.