Fighting Fire With Satire in Syria

As the Syrian regime continues to crack down on rebel fighters, people are fighting back with a wicked sense of humor, writes Ruby Russell. The Syrian leader himself has offered plenty of fodder, with his distinctive lisp and hyena-like laugh. 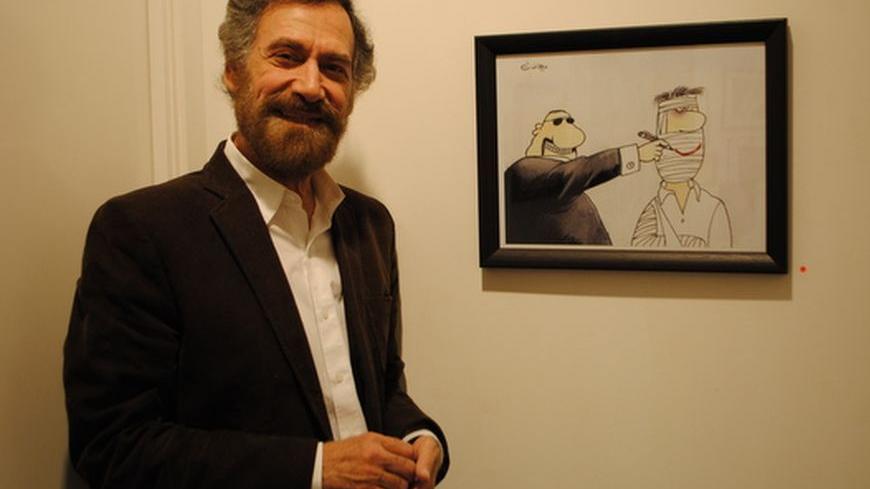 Ali Farzat at an exhibition of his work earlier this year in London. - Naomi Westland
Ruby Russell
September 19, 2012

As the Syrian regime continues to crack down on its opponents in the 18-month uprising, Syrians have fought back with a wicked sense of humor that includes a "Top Goon" finger puppets series, cartoons, crank callers and comic sketches performed in bombed-out buildings.

The Syrian leader himself has offered plenty of fodder: Bashar al-Assad’s long neck and sloping eyebrows, as well as his distinctive lisp and strangely manic laugh, have become the butt of endless jokes by subversive comics since the first protests rocked Syria.

“When Assad gives speeches he may be particularly articulate and erudite in his delivery – he’s very calm and soothing and in control,” said Adel Iskandar, who specializes in Arab media at Georgetown University. “Yet when he laughs, he laughs in a very strange, goofy, hyena-esque way and for oppositional Syrians, they look at this and think it’s just utterly absurd.”

Iskandar says that some of the darkest satire he has seen come out of Syria consists of montages showing the bloodied corpses of the regime’s victims to the soundtrack of Assad’s laugh. “It’s funny and very morbid — almost like watching a Tarantino movie,” he said.

While satirical art has ancient roots in Syria, state control of the media meant such comic swipes at the regime have been almost nonexistent in recent years, says cartoonist Ali Farzat.

“I have been drawing cartoons for 30 years and in 2001 after Bashar al-Assad took over from his father I started a new magazine, Al Domari,” Farzat said. “He came to power promising democracy, openness and transparency but it wasn’t long before the promises started to fade away — lots of people were arrested and my magazine was shut down.”

As a result, the internet, due to its difficulty to police, has become the main platform for Syrians to ridicule and laugh at their oppressors, in what have become potent weapons in the uprising: From satirical cartoons and sketches to Youtube videos of kids goofing around as bullets ricochet off the buildings around them.

In one, which claims to be shot in Homs, a young man rolls on the ground doing commando moves with a roman candle in his hand as shots echo through the streets and the cameraman laughs so hard he can hardly film straight.

The image of kids continuing to be kids and managing to find humor in the desperately mismatched battle between the regime and protestors makes it almost impossible not to laugh along with them.

“People have to show their frustration, they have to vent against Assad,” said Abdulwahab Sayed Omar, a UK-based Syrian activist. “And while some might decide, ‘we can retaliate by arming ourselves,’ a good proportion of the Syrian people have decided to retaliate by ridiculing the regime.”

Syrian prank Hussain Jabri A.K.A. Abu Zuhair became something of a folk-hero since the uprising began in March 2011, using various guises to draw regime officials into absurd conversations, for example offering to sell them advanced new technology designed to massacre even greater numbers of unarmed citizens, then releasing recordings of the conversations. At times, he launches into sudden verbal attacks in which he denounces the regime in outrageously abusive language.

Analysts say that such brazen attacks on the regime would have been unthinkable before the uprising began.

“In Syria you couldn’t say a word about Assad at all,” Iskandar said. “We’re talking about a very abrupt breaking point with the regime and a real transformation in public expression.”

And even as the uprising has turned increasingly into a bloody civil war, with Free Syrian Army fighters going on the offensive, “rebel” humor has developed.  Jokes about deprivations, a lack of weapons and the increasing number of defections from Assad's inner-circle run rampant. In one recent cartoon that followed the defection of Assad's prime minister, Faruq al Shara, last month a new minister is sworn in by Assad: “I pledge not to defect,” the new minister says.

Regime accusations of foreign “infiltrators” orchestrating the Syrian revolution have been a repeated target of ridicule. In numerous videos, rebel fighters display “military equipment” donated by the United States or Israel. Men on the backs of donkeys show off shovels and brooms and one video has fighters picking their way across the rubble of Homs carrying eggplants for hand grenades and wearing ammunition belts made from strings of okra.

“This air defense radar system is a gift from the American ambassador,” says the voiceover on a video that is reportedly shot in Hama. As the camera focuses on what looks like an old satellite dish rotating in an oil barrel, the voice says, “It’s a very advanced system. It’s cost a quarter of the American defense budget.”

An activist adds it can wash your clothes when it's not busy detecting weapons.

Analysts say reducing all-powerful regimes to an object of ridicule is a powerful tool in such oppressive societies, one used throughout history.

The Arab Spring”­ uprisings continued the tradition. One Egyptian protestor in Tahrir Square held up sign saying simply, “Leave, my arm hurts,” while in Tunisia a photo of man pointing a baguette at armed police as if it were an assault rifle spawned a spate of cartoons featuring the regime-busting superhero “Captain Khobza [bread in Arabic].”

One of the most watched satires on the internet is the finger puppet show, “Top Goon: Diaries of a Little Dictator,” created by a group of Syrian actors under the name Masasit Mati. In it, a lisping Bashar, or “Beeshu,” is shown as an impulsive child, giggling one minute and sobbing the next, on the shoulder of the bulldog-jawed “Shabih” (the pro-regime thugs). In one episode, the ghost of Bashar’s father, Hafez, appears from beyond the grave and berates his son for failing to live up to his own record of violence in Hama, where an uprising in 1982 resulted at 10,000 deaths.

“But to be honest father, you killed all the people in Hama but you didn’t kill Qashoush for example,” Beeshu says, referring to Ibrahim Qashoush, an amateur poet from Hama who is credited with a song heard at protests across the country: “Come on, Bashar, time to leave. ”

Qashoush survived Hafez’s merciless attack on Hama as a child but in July, he was reportedly found dead in Orontes river that flows through his hometown — his vocal cords hacked out.

Farzat, whose drawings were held up at protests early on in the uprising and published across the globe, also became a target. In August 2011, he was forced off the road while driving through Damascus.

“They put a bag over my head and beat me all over my body," Farzat said. "I heard one of them say, ‘break all his fingers so he can never draw and criticize the president again.’”

But for a regime that punishes carrying medical supplies or camera phones more harshly than those smuggling weapons, satire poses a difficult problem: While drugs and recording devices can be confiscated, a joke or song has a life of its own.

“Artists, singers, painters, comedians — these people are a threat because they are able to express the misery of the people in a way that captures the imagination and really creates a language for the revolution,” said Iskandar. “The regime doesn’t know how to deal with them and of course it reverts to the strategy of beating them up and punishing them.”

But observers say that violence has been met with defiance. Qashoush is known as the “nightingale of the revolution” and his words became an anthem for the uprising. Farzat’s first drawing after the attack was a self-portrait: He lies back in a hospital bed with one eye swollen shut and one stiff, bandaged middle finger raised.

Naomi Westland contributed to this report.

Ruby is a British print journalist based in Berlin, and has written for US and UK publications including The Washington Times, USA Today, The Daily Telegraph, The Times of London and The Global Post. She is the founder and co-editor of Teller magazine, an arts and literary publication, and deputy managing editor of Associated Reporters Abroad, an organization dedicated to deepening international journalism.