A group of Syrian opposition activists has made an online satirical show criticizing well-known figures of the Syrian political scene and mainly focusing on President Bashar al-Assad. 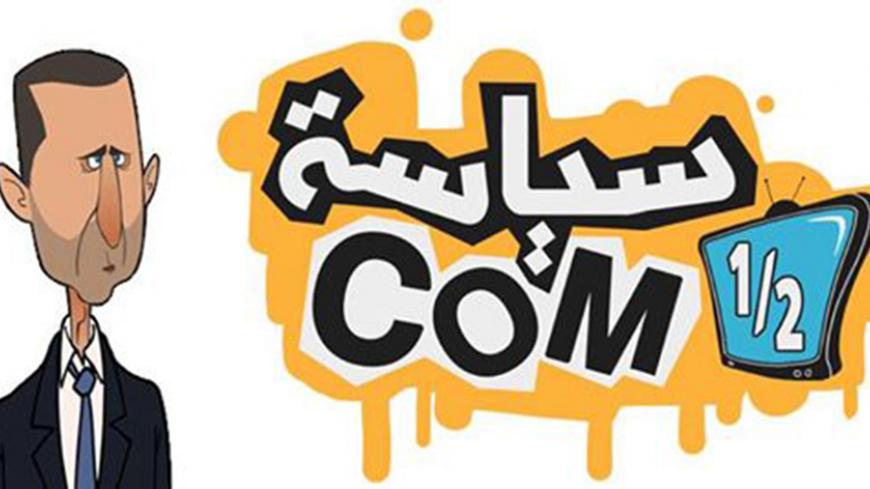 DAMASCUS — On its Facebook page, the Online Production Company has been posting since May a satirical cartoon series called "Siyaseh Noss Com." The main characters of the series are political figures in the Syrian arena such as President Bashar al-Assad, Hezbollah Secretary-General Hassan Nasrallah, Syrian National Coalition head ​Khaled Khoja and Louay Hussein, head of the Building the Syrian State movement. Assad is the main focus as a pivotal figure and target of criticism and ridicule.

The animated series is a creation of young members of the Syrian opposition such as Samir al-Matfi, who also goes by the name of Songa. Songa also handles the administrative account of the satirical opposition Facebook page “The Chinese Revolution,” which was created in December 2012. This page was among the first that used satire to call for the fall of the Syrian regime and gained wide popularity at the beginning of the Syrian revolution.

Songa comes up with ideas and writes scenarios for "Siyaseh Noss Com," while Hazem draws the characters, Khaled and Youssef create the animation and Subhi directs. Khaled also does the voice-over for all the characters except for Assad, whose voice belongs to Songa. The team works under fictitious names for security reasons.

"Siyaseh Noss Com" keeps up with the latest developments on the Syrian political scene. Songa told Al-Monitor, “We started effectively working on the show in mid-May. We started with Assad’s speech at the Martyr’s Day festival May 3. The character of Assad was the first to be created and we produced the first episode on this speech May 20, which set the wheel in motion for subsequent episodes that reflected the developments on the Syrian political scene. The last episode, titled 'Syria at auction,' interpreted Assad’s latest speech before the presidents and members of the popular organizations and trade unions July 26.”

According to Songa, since its first episode, the show has ridiculed political events by focusing on deriding the actions of the Syrian regime and its allies. “However, sometimes the show scorns Syrian opposition figures. Also, on May 20, we produced a satirical episode titled 'You are not yourself when you are hungry.' This episode was about the conference where President of the Syrian National Coalition Khaled Khoja and head of the BSS Louay Hussein met on May 11, following the incident when the Syrian revolution flag was removed during the conference, which caused a stir in the opposition media circles,” Songa said.

The producers of the show choose political events and rewrite them into a comedy screenplay full of ridicule. Political figures are portrayed as cartoon characters that are animated in such a way to stress their flaws, be they their hand gestures, facial expressions or the way they talk. A large part of the show focuses on Assad’s body language and his lisp.

Each episode focuses on a particular event or character. For instance, the episode that was aired May 24 depicted Nasrallah with famous soccer players such as Lionel Messi and Ronaldo, praising their successes as if they were similar to the goals of the resistance axis.

On June 16, another episode addressed the real reason why pro-opposition leader Walid al-Omari beat up Khoja during the SNC conference held in Istanbul on June 13, when an altercation between Omari and Khoja turned into a fight.

On why Assad is the main character and the subject of derision in most of the episodes, Songa said, “In the eyes of his supporters, security men and army, Assad is the essence, the infallible, irreproachable and faultless person. We [Syrians] are not used to deriding an important figure such as the president in this manner. Therefore, we decided to undermine the image of this dictator in the eyes of neutral people, who still fear him, and to remove the aura that his supporters have built around him.”

"Siyaseh Noss Com" focuses on political events only. “The Online Production Company is in the process of producing a variety of shows dealing with social, cultural and revolutionary issues,” Songa said.

He added, “We are preparing five programs right now. One of them will start in a few weeks under the name of 'Kashay.' It is a satirical political and social show. Subhi and I will do the voice-over for the lead characters in it."

The team is not affiliated with any political party. Asked about funding, Songa said, “We are a group of friends working together, each according to his field of expertise. We receive financial support from other well-off friends. This is our strong point, as we remain independent on any idea we want to focus on and we have the freedom to choose any figure to deride. Our political view is that of the Syrian people who stood up against injustice, murder, oppression and corruption.”

Like any other projects that have emerged during the Syrian revolution, the team still faces some financial hardships. In addition, they are based in different countries and connect with one another online, another challenge for the creative process.

Nevertheless, since its May 20 inception, their first show has garnered much attention on social networking sites, with at present roughly 16,000 likes on its Facebook page.