A group of seminary students are turning the popular book “Tintin and Sinbad” into an animated film series. 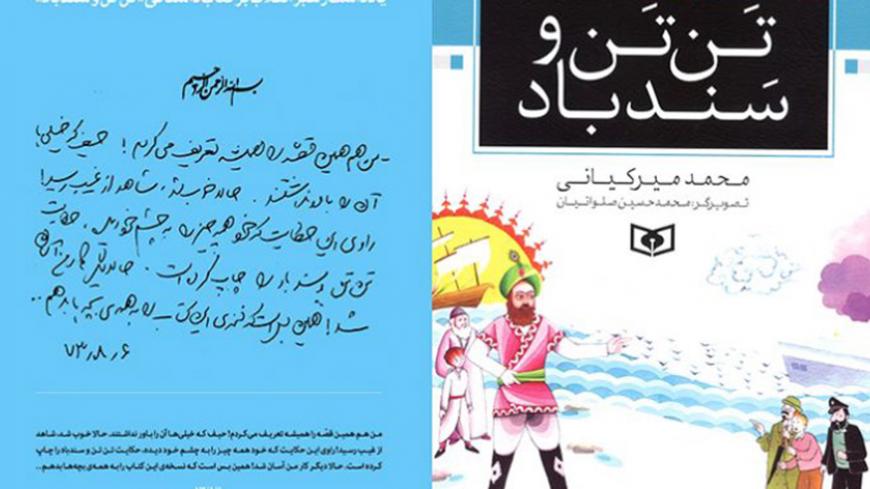 The cover of Mohammad Mirkiani's book “Tintin and Sinbad,” which is set to be made into an animated series, Iran, Aug. 8, 2016. - Twitter/@IranFrontPage

Written some 25 years ago, “Tintin and Sinbad” is an Iranian book by Mohammad Mirkiani that depicts the cultural invasion of the West through its main characters, Tintin, an adaption of the famous character created by the Belgian cartoonist Georges Remi, and Sinbad, a fictional sailor of Middle Eastern origin. In the story, Tintin’s ship heads to the East to “capture the land of Eastern stories,” and Sinbad and his friends go to war with them. Their battle ends with the Eastern heroes victorious.

Tintin and Sinbad's story is now being turned into an animated film series titled “War of Legends.” Completion of the first episode followed the Aug. 8 public reading of a note written in November 1994 by Iranian Supreme Leader Ayatollah Ali Khamenei. The message, unveiled by the Office for the Preservation and Publication of Ayatollah Khamenei's Works at a cultural event, reads, “I always used to tell the same story. It’s a pity that not many people believed it. Now all is good, and here’s the evidence! The narrator of this story, who has witnessed everything with his own eyes, has told the story of Tintin and Sinbad. Now my job is easier! The only thing I need to do is to present a copy of the book to all children.”

Ali Pourhosseini, heading the animation project at the FaraGostar Institute, told Al-Monitor, “There were two major concerns about this project. One was to stand up to cultural invasion, while the second was to present a Western lifestyle. This meant that not only do Western characters invade and replace our characters, but they also interfere in our lifestyle. Our kids today don’t get to be kids like they used to.”

Pourhosseini said the film will consist of five episodes, and its main character is an Iranian boy from a fishing family who spends his adolescence, youth, middle age and old age with these heroes.

“In the first episode, characters from the Near East go to war with those from the West, characters from Iran, Iraq, Syria, Lebanon or Palestine, for instance,” Pourhosseini said. “Episode two becomes more complex, as heroes from the Far East also come into play. The third and fourth episodes see the addition of characters from Europe, Australia, Africa … who have positive character developments.”

In the fifth and final episode, the producers will show the end of the world according to the Shiite perspective. Pourhosseini insists that there is no favoritism shown toward either the Western or Eastern heroes in the work.

“We have positive and negative figures in both worlds,” he said. “Therefore, we have tried to portray human society as a whole, meaning that we believe that at the end of the world, an offspring of Islam’s yield will come and bring about the alignment of pure and beautiful thoughts resulting in a world filled with peace. This is something that will happen at the end of the animation.”

As in the book, the character Tintin symbolizes Western colonialism, while Sinbad represents Eastern resistance against colonialism. According Ali Kashefi Khansari, a journalist and critic of children's literature, their symbolism is accentuated more in the book than in the animation.

“Familiarizing the kids of a country with the heroes of other countries and strengthening the sense of nationalism and belonging to one’s own native culture in kids are definitely something good,” Khansari told Al-Monitor. “However, if this comes at the expense of creating a sense of hatred and animosity toward other nations, it is not admirable. I think this is why the author of the book decided to focus on just a few characters and not present a negative image of all Western peoples and countries. Taking this into account, one can say that this is an acceptable book, which won’t trigger hatred and violence among nations, although the real Tintin, which we have come to know in the original story, is [also] not to the same degree a reflection of the West’s colonialism.”

Mirkiani wrote “Tintin and Sinbad” in 1991 as a young adult book. It has been reprinted 11 times. This summer, it was the second highest selling book in Iran, behind the latest “Harry Potter.” Khansari primarily attributes the book's high sales to its current audience.

“At the moment, the main audience for this book is adults, not children,” he said. “The book will only become popular in children’s literature when they know the characters. But the reality is that Iranian kids today are not familiar with Sinbad, Ali Baba and the magic lamp or with Tintin and Captain Haddock.”

According to Pourhosseini, this is one of the main problems in making the animation series. “We are living in an era where children have different tastes,” he claimed. “Today, Western companies and Hollywood have defined new characters for our kids. Therefore, to create a scenario in which it will have serious viewership, we had to review this book to see if there was room for updating. We spent two years working on this and began production in spring 2015. The first episode was completed about one month ago, and it is about 100 minutes long.”

The FaraGostar Institute, founded 18 years ago at the seminary in Mashhad, is handling production. “At first, we were just a dozen seminary students, and everything we did was a spur of the moment thing,” said Pourhosseini. “However, now about 60% of our colleagues are seminary students, and the other 40% have university educations. Financially, we are not linked to any organization. We have considerable productions that generate their own economic income [for the company].”

Pourhosseini revealed that the decision to produce the animation was made two years ago, after members of FaraGostar met with one of the supreme leader’s students at the Islamic Research Foundation of Astan Quds Razavi, the main charitable foundation in Mashhad. “He gave us the book ‘Tintin and Sinbad’ as a gift and said the leader had enjoyed reading it and suggested the idea of turning it into an animation,” Pourhosseini said. “By making this, we wanted to tell the world that we support the Guardianship of the Jurist. We were very young during the years of Iran’s Islamic Revolution and could not do much then, but now we have reached a point in terms of artistic taste and executive capabilities where we can say ‘labaik’ [answer in the affirmative] to [Ayatollah Khamenei’s] invitation to [join] the fight against [Western] cultural invasion.”

The cartoon will debut in Mashhad during Eid al-Ghadir, which falls on Sept. 21 this year. In Shiite tradition, the event marks the Prophet Muhammad’s appointment of Ali ibn Abi Talib as his successor. Production of part two will begin at the same time. Ultimately, the work is expected to be dubbed in both Arabic and English.

“We want to attract a global audience and therefore see this animation as something transnational,” said Pourhosseini. “What is wrong with us presenting the heroes of other nations, but in our own way, so we can convey through them the meanings we want?”