Author Caroline Torbey spent her childhood trying to understand her Lebanese father’s colorful Arabic filled with proverbs, so she created a children’s book to share what she learned with a new generation. 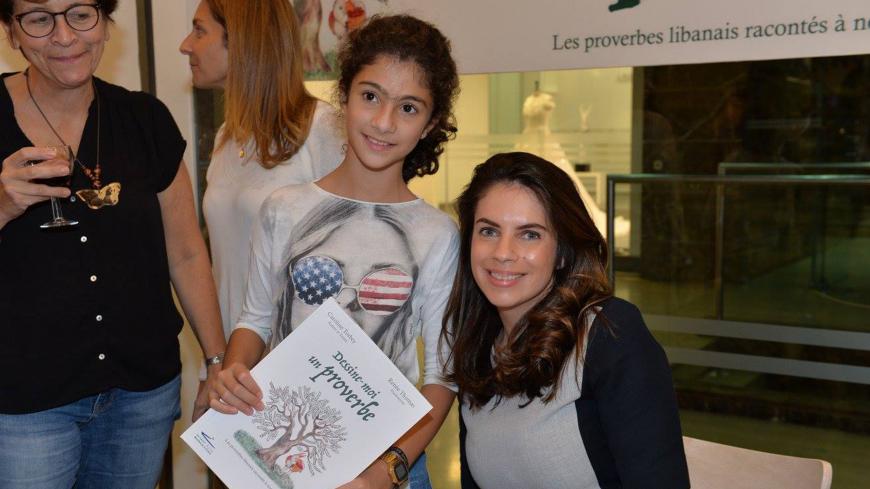 Caroline Torbey poses with a copy of her book "Dessine-moi un proverbe" and a young reader at a book-signing event on Oct 12, 2017. - LakayCreation

Caroline Torbey has the perfect example of a multicultural and multilingual background. Her father is Lebanese and her mother Vietnamese-German. When Torbey was a child they lived in Cameroon, where the official languages are French and English, but 250 other languages are spoken. She grew up speaking French with her parents as well as Arabic, English, German and some occasional Vietnamese.

“My father did not speak a lot [in Arabic] but when he spoke, it was full of proverbs and idioms,” Torbey told Al-Monitor. “I wasn’t fluent in Arabic as a little girl and ended up doing a lot of research so that I could understand what he was saying. I thought the Lebanese proverbs, with which I grew up, were both colorful and interesting.”

​Her struggles to understand the expressions led her to write “Dessine-moi un proverbe, les proverbes libanais racontés à nos enfants” (“Draw me a proverb, Lebanese proverbs told to our children”). The book, published in October, introduces 20 Lebanese proverbs — most of which have similar expressions in English and French — in a simple, fun and teachable way and will be distributed to schools under the patronage of the Lebanese ministries of Culture and Education. The book was produced in French but will be translated into Arabic. The author plans to publish nine more volumes for children in the near future.

The book centers on common proverbs, such as “three's a charm” and “beware of quiet waters,” and illustrates each expression with a short story and drawing. The author’s target audience is the children of the Lebanese expats who live abroad, especially those who have one Lebanese parent.

“The idea to write something for the children came after I published my first book,” Torbey told Al-Monitor. The 29-year-old writer published her first book, called “Quelle heure est-il chez vous?” ("What time is it for you?"), a year ago. It is about 24 hours in the life of a young Lebanese woman. Each hour is marked by a short story about diverse people around the world, all somehow linked to Lebanon or the elusive central character, simply referred to as "her." Then she started thinking about her own experience as a child with her father's Lebanese expressions.

“I didn’t want to write a dictionary,” she said, explaining she chose instead to show young people how the proverbs might be used. “I then made up stories that wouldn’t bore children.”

She also wanted her stories to impart some information about Lebanon, so she sought to integrate cultural references in them, such as different regions of the country, different products and objects associated with them and situations one might encounter in daily Lebanese life. She cast animals as the characters. “Finally, I added a map of the country showing where each character is located and a glossary explaining specific terms,” she said.

To explain the proverb, “The crown of man is modesty,” Torbey told the story of Kadish, a donkey who refused a crown of jasmine flowers for his helpfulness, showing helping others is the best award you can get. In “The sun will rise whether the cock sings or not,” Kaleb the dog discovers that the death of a loved one, sad as it is, will not stop life from going on.

Each story is accompanied by a colorful illustration by Lebanese illustrator Renée Thomas, who Torbey met early last year. “Renée gave life to characters that came straight out of my imagination,” she told Al-Monitor.

It was no easy feat to capture the idiom as well as all the Lebanese cultural references in each story's single drawing. “I had to decide what to draw,” Thomas told Al-Monitor. “Often, there would be too many elements in the story, so I had to pick and choose.”

In one of the stories, Torbey explores the expression, “If only never built a house,” with a bee called Zereta, who wants to lose weight and be healthy but ignores all advice given by her friends and suggestions that she exercise. Thomas simply drew Zereta in her house, having coffee and gorging on Lebanese sweets.

“Each region is associated with something typical, something that is part of their heritage, like hats, clothes or food,” explained Thomas. “Sometimes, I just drew a whole village.” The regions and villages in the book teach young readers a bit about Lebanon’s geography.

For Torbey, the proverbs are not simply figures of speech but a window into the country’s culture, heritage and common beliefs. “My parents didn’t speak a lot about Lebanon, so I had to dig in myself to learn more, and I think proverbs represent a lot,” Torbey said.

“Proverbs are passed orally from generation to generation, it is part of the family history,” Thomas added. “It is like a jewel going through time: It doesn’t lose its value and represents a real social and cultural heritage.”

Torbey also pointed out that the proverbs of different languages often share many similarities, and similar imagery unites people of very different backgrounds and origins.

“For me, proverbs are the soul of a country and the memory of a nation,” said Torbey. “Yet in the final analysis, some of them have universal values of patience, altruism, love and peace. Those beliefs are found [across] the world’s proverbs, which shows that humankind agrees on them at least. We shouldn’t lose them. We should cherish them and pass them on to new generations.”