Dear Mona Eltahawy,You Do Not Represent “Us”

When Samia Errazzouki came across Foreign Policy’s recent issue, she couldn't believe her eyes. It really was a nude woman covered in a black body-painted niqab. As a Muslim woman, she was even more enraged at Mona Eltahawy's accompanying article, "Why They Hate Us," which portrays veiled women as helpless and in need of rescue.
A woman takes part in a protest against the Egyptian military council during a march to mark International Women's Day in Cairo March 8, 2012. - REUTERS/Mohamed Abd El Ghany 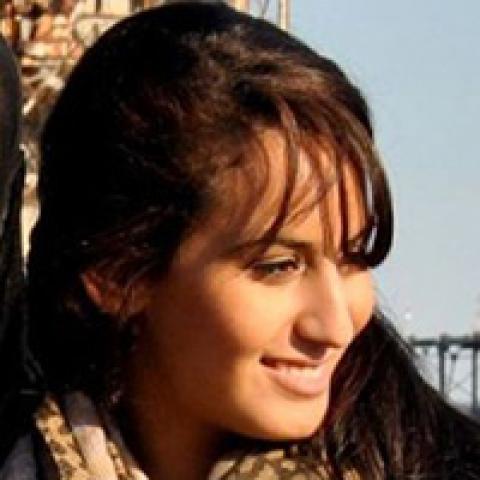 When I first came across Foreign Policy’s recent “Sex issue” cover, I thought it was an attempt at blackface, but upon zooming in and reading the title of the article by Mona Eltahawy, my eyes were not fooling me. It really was a nude woman covered in a black body-painted niqab.

They tell you do not judge a book by its cover. But as an Arab-American Muslim woman, I could not get that image out of my head long enough to even begin reading Eltahawy’s article. I kept thinking about how the image degraded and insulted every woman I know that wears or has ever worn the Niqab. This was the image Foreign Policy chose to set up an article about the treatment of women in the Middle East and North Africa.

The face veil is rooted in pre-Islamic history, and Leila Ahmed’s Women and Gender in Islam goes into a comprehensive explanation of its roots in the region. Today, those who are fixated on the Niqab believe that focusing on what a Muslim woman wears is what defines her thought, her intellect, her capabilities, her sexuality, her gender and her very existence. It is a narrative that’s been framed by the West and fed by the likes of Qasim Amin and even Hoda Sha’rawi. Foreign Policy’s decision to choose this photograph of a naked woman with a body-painted niqab embodies this problematic narrative in more ways than one:

But I digress. On to Eltahawy ’s article, titled “Why Do They Hate Us.” The title sets off an alarm: the use of the first-person-plural. The first-person-plural can be appropriately used when the speaker has been elected to speak on behalf of the group they are speaking on behalf of. In this case, the “They” being Arab societies and “Us” being Arab women. Eltahawy ’s self-appointed representation of Arab women is neither professional nor accurate. While I sincerely value the freedom of self-expression and have not one single problem with her expressing her views, doing so on the behalf of all Arab women is enraging.

Her article presents a summary and background of the treatment of women in the region, paired with statistics and specific examples of cases from countries throughout the region, fluffed with emotional rhetoric, ending with a call for fighting against injustices. Every now and then, a different image of the nude woman with the body-painted Niqab interrupts the commentary, fueling the rage all over again.

The entire article is framed in a way that portrays Arab women as helpless, and in need of rescue and protection. It’s a convenient narrative for Foreign Policy’s mostly Western-based readership. This is not to say that there are indeed injustices committed against women in the region, that women in the region certainly are victims of a patriarchal society, and that institutionalized oppression has marginalized, killed, and oppressed women in the region. This is not the issue.

The issue is framing and presenting women in the region as a monolith and pitting their struggles against the backdrop of an argument which points to “hate.” The argument dismisses the role of figures like Tawakul Karman, Zainab and Maryam al-Khawaja, and others — women who rose through the revolutions and were present in the public sphere during protests and demonstrations, standing alongside their compatriots demanding change and an end to injustices of all kinds. These women stood up as individuals and not as self-proclaimed representatives of Arab women.

Eltahawy points to “hate” as the source and cause of the injustices committed against Arab women. She scapegoats the rise of the Islamists, but Maya Mikdashi debunked that argument a couple months ago:

“Gender equality and justice should be a focus of progressive politics no matter who is in power. A selective fear of Islamists when it comes to women’s and LGBTQ rights has more to do with Islamophobia than a genuine concern with gender justice. Unfortunately, Islamists do not have an exclusive license to practice patriarchy and gender discrimination/oppression in the region. The secular state has been doing it fairly adequately for the last half a century.”

Yet, Eltahawy entirely neglects the socioeconomic roots of gender inequality, the rise of authoritarian regimes in a post-colonialist context, the remnants of dehumanization and oppression from colonialism, the systematic exclusion of women from the political system or those who are used as convenient tools for the regime. There is more to gender inequality than just “hate.” Arab women such as Leila Ahmed and Lila Abu-Lughod, among others, have proven this fact time and time again.

The monolithic representation of women in the region, illustrated by an over-sexualized image of splattered black paint over a nude body, however, does nothing to rectify the position of women in any society.

Samia Errazzouki is a Moroccan-American writer based in the Washington D.C. metropolitan area. Samia is an editor with Jadaliyya's Maghreb Page, and her research focus is Morocco's political economy and reforms. She blogs at http://samiacharquaouia.wordpress.com/