In Beirut’s Zico House, an exhibition organized by the Syrian Female Journalists Network of clay female figurines accompanies the launch of a book about the lives of Syrian women. 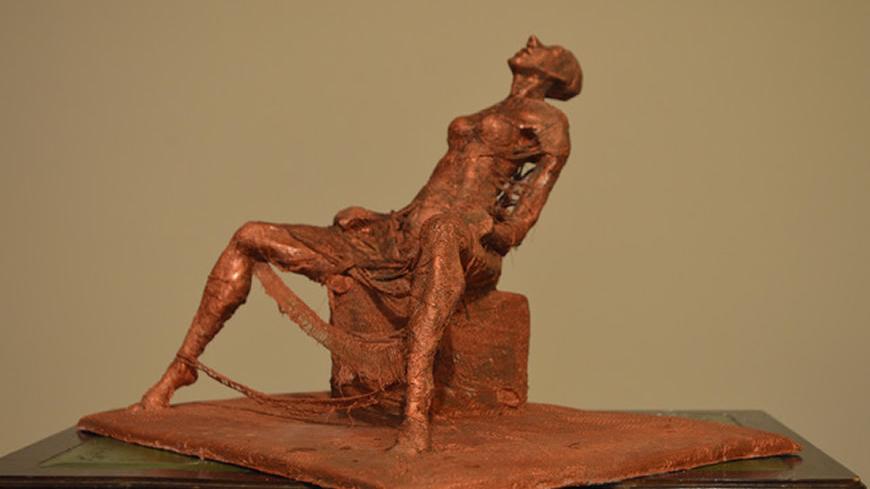 The statue by Syrian artist Oula Haidar was part of the Syrian Women Storytelling event organized by the Syrian Female Journalists Network in Zico House, Beirut, May 10, 2017. - Oula A. Haidar

A small statue in Zico House, a multi-use art space in Beirut, shows a female figure on a chair whose body is convulsed in its desire to scream out her pain. It depicts Leila, one of the Syrian women whose stories have inspired a marriage of forms and words in a storytelling event organized by the Syrian Female Journalists Network (SFJN) in Beirut on May 10.

The small clay statues belong to Syrian artist Oula Haidar, whose female figures reflect the stories of Syrian women that are collected in a book titled “Out of the Shadows.” The focal point of the event at Zico House is to give Syrian women a voice in narrating their lives and struggles, and to create awareness of sexual violence.

The book is based on the interviews with many women in Syria, Lebanon and Jordan as part of the Female Storytellers Project. SFJN — a nonprofit organization established four years ago that works with more than 70 journalists based in different countries — aims to build bridges between the media and Syrian women to enhance and empower both men and women working in the field of media.

“We wanted to change the image of women and challenge the way gender and equality issues are addressed in the media,” Milia Eidmouni, a Syrian journalist who is the co-founder and regional director of SFJN, told Al-Monitor. “We only see women as victims — poor and uneducated. The coverage of success stories is rare. Our main goal is to link Syrian journalists with women who could speak to them, give them advice and train them on gender perception while covering the news.”

The Female Storytellers Project started in 2015, after SFJN volunteers spoke with women who they met through acquaintances or during conferences, and whose stories struck them.

“While working with a relief agency in Lebanon and while helping the SFJN, I met a lot of women who wanted to share their story,” Oula Haidar, a Syrian sculptress and graphic designer now living in Scotland, told Al-Monitor. “I suggested to the rest of the team to write an article about successful stories by women for International Women’s Day, but each of them gave so many details that we simply could not edit it out. We then decided to highlight every story through the publication of a handbook in Arabic and translated into English.”

Then the team members added the idea of sculptures to bring a face to the words and a voice to read out the stories. They planned to display the statues and launch the book first in Lebanon, then in Europe.

During the exhibition, people could hear a voice narrating the lives of the women who have been raped, jailed, kidnapped, forced to abandon their families or tortured. Equally forceful statues describe the situations the women have been in.

“I read these stories many times and tried to put myself in the shoes of the women to recognize what was important in every story and better represent their feelings,” Haidar said. “I have placed Reem — who still feels the icy coldness of the prison running through her body — sitting next to a wall. Leila, for example, still hears a scream inside her, so I represented a woman on a chair, trying to scream out her pain.”

A line in the book reads, “[Leila] still believes that her plight is the same as all the women who live at the mercy of a patriarchal mentality, whether it is legal or social. That mindset is what prevented her from moving on from the damage that had defined her life for so many years, just because she was born a female.”

For the artist, the art of storytelling allows these women to be heard. “If they speak, they will not feel bad about themselves. Moreover, it will be a record of what happened to women during the uprising against [Syrian President] Bashar al-Assad, particularly those who ended up in jail," Haidar said. “In the end, the stories are all about women fighting against patriarchal rules.”

Eidmouni said, “Until now, talking about sexual-based violence is totally taboo in Syria. We hope this project can give women the push to speak up, to seek out support and feel that they are not alone. Maybe it will also reach Syrian policymakers — for them to decide to open shelters for women for example.”

Another aspect to recounting Syrian female lives is the impact it could have on the residents of Western host countries.

“It could be useful for the refugees’ image in the media, especially in Europe,” Haidar said. “People have a very limited view of what is a Syrian woman, in a scarf and staying at home to take care of the kids. At least that’s what I see in Scotland. They don’t even believe I’m Syrian because I don’t fit their idea of it. But instead, they could see that women do things — in Syria and elsewhere.”

The same idea drove Rachel Clarke, a German storyteller and creative director of the Storytelling Arena in Berlin, to seek out Syrian women to participate in her monthly storytelling event.

“In August 2015, a lot of Syrian refugees arrived in Germany and I volunteered as a German teacher. As my students began sharing their stories with me, I invited some of them to tell their story during my storytelling events,” Clarke told Al-Monitor. “These events were successful, so I reached out — through my network — to women who consented to share their story on stage.”

This work led to an event in October 2016, this time with only women. “I met with Rana, a painter who told her story of wanting to be a painter as a child. She would hide her paints and brushes from her mother. Her husband encouraged her to get a fine arts degree and continue painting. When she started telling her story on stage, people forgot about her hijab and identified with her story, which also gave us an insight that [we are] able to break through stereotypes we can have about Arab men dominating women’s lives.”

Firsthand accounts, delivered on stage or retold by SFJN, may be a way to reach out, speak up and break the stereotypes brought by the Syrian war.