The Egyptian version of The Vagina Monologues, BuSSy, has gathered over 1,000 stories since 2006 and brings women and men to theaters around the country to share their experiences on sexual harassment and abuse. 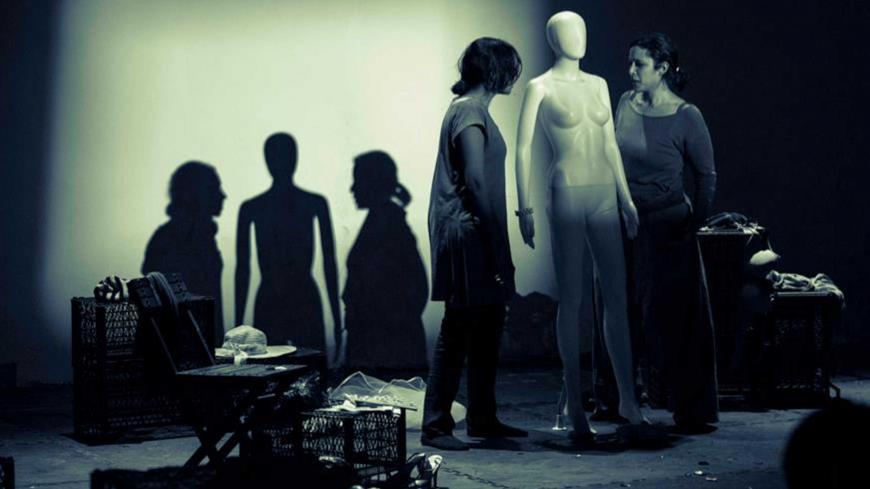 Despite financial difficulties, lack of staff and government support, the BuSSy (Look) art performance project has been encouraging Egyptian women and men to tell their experiences of gender-related issues, abuse and sexual harassment on stage. Storytelling workshops, performances and social activities have been organized across the country since the project started in 2006.

BuSSy seeks to resist social restraints through theater by giving people from different backgrounds and ages the opportunity to share their stories without fear of stereotyping or criticism. The project organizes storytelling workshops where participants are trained on how to tell their stories. Then they go on stage and do just that.

“The participants do not act. They are real people with real stories and all they do is tell their stories openly on stage,” Sondos Shabayek, BuSSy's project director, told Al-Monitor.

Shabayek said that the idea of launching the project goes back to 2005, after a performance of “The Vagina Monologues,” an award-winning play by Eve Ensler, at the American University in Cairo. The audience thought that the show was bold but believed it did not truly reflect what Egyptian women face in society. This reaction, Shabayek said, prompted the birth of the BuSSy project.

In 2006, a group of students initiated the BuSSy project, an annual show of real stories by Egyptian women and girls. The first show included a collection of stories submitted by Egyptian women in response to an announcement by the project’s founders that read, “If you have a story about yourself or a woman that you know, please grab a form and share the story.”

The monologues written and narrated by the women tell real stories and challenge what Egyptian society has refused to recognize.

In 2010, the project expanded to include stories by both women and men who were encouraged to speak about their personal experiences in storytelling workshops, and later on stage.

“The main aim of the project is to expose to society the real problems that are going on and reflect what is really happening in Egypt in terms of social issues,” Shabayek said.

In 2012, the BuSSy project held workshops and shows in different theaters around the capital instead of only one annual show. In 2013-14, the project’s founders traveled to different cities across Egypt to hold storytelling workshops and special shows. The BuSSy team has also organized shows in seven governorates, including Cairo, Alexandria and Minya. In addition, workshops and performances have been organized abroad, including in Jordan, Lebanon, France, Sweden, India and the United Kingdom.

Shabayek said that since 2006 more than 56 performances and 20 workshops have taken place as well as the documentation of over 1,000 stories.

During the United Nations campaign "16 Days of Activism Against Gender-Based Violence" (Nov. 25-Dec. 10), BuSSy chose to tackle the subject of domestic violence with a one-off show called “In_Her_Home” with women and men sharing dozens of stories.

The project is expanding although the challenges are growing. “Sometimes we do not find places where we can hold our performances as some theaters refuse to schedule our shows. At other times we do not have enough people who can perform,” Shabayek said.

“BuSSy gave me the opportunity to confront myself and be more courageous and frank. I learned from the project that I have to share my suffering, sadness and pain just like I share my happiness with other people,” Omar Hisham, one of the storytellers, told Al-Monitor.

Hisham said that BuSSy’s workshops, performances and stories are “the only place that makes me feel alive. BuSSy helped me accept myself, accept others and love them despite their differences. The project changed me and my life,” the young radio announcer said.

Hisham added that during the workshops he managed to tell stories he never thought he could tell. “I had different feelings. I never thought that I would tell any of my stories in front of other people whom I do not know and even in front of people I do know,” he added.

Maryam Hegab, a trainee and volunteer at BuSSy, said that she has wanted to take part in the BuSSy project for a long time. “Now that I have done it, I am happy because I am supporting a place that allows people to express themselves freely,” she told Al-Monitor.

Randa Fakhr El Deen, the executive director of Union Against Harmful Practices on Women and Children, said that having spaces where women and men can speak openly about their sufferings and horrible experiences can be of great help to them.

“The BuSSy project can have a very positive psychological effect on the people who chose to participate in it and have the guts to stand on stage and fearlessly tell their stories. This can be a kind of psychological therapy,” Fakhr El Deen told Al-Monitor.

She also expressed hope that the project expands further with more workshops and performances in Upper Egypt — the southern region of the country where people often hold conservative views about gender and religion. “Projects like these can be one of the solutions to the many gender problems in Egyptian society,” she added.