Syrian refugees act out their stories in 'The Caravan'

'The Caravan,' a play based on Syrian refugees' testimonies, will begin touring Lebanon in June. 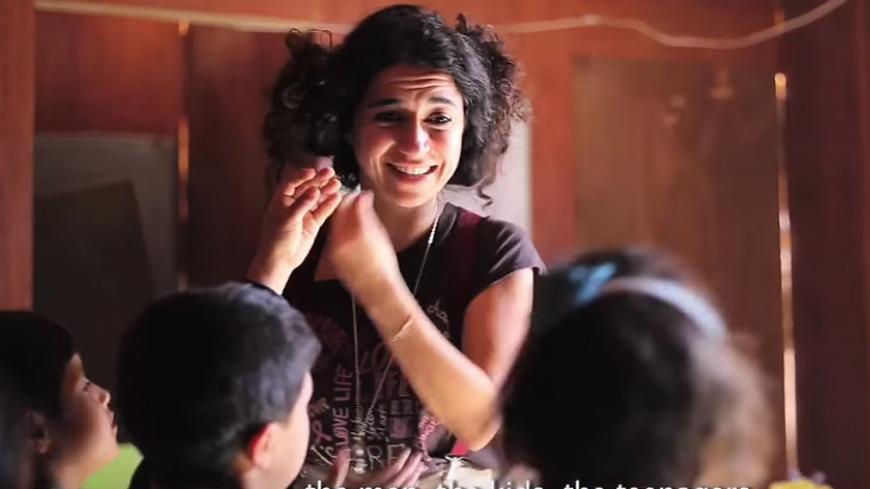 “The Caravan,” a play based on testimonies of Syrian refugees in Lebanon, will begin touring the Bekaa Valley, then western Lebanon and the rest of the country, starting June 21. The play is an initiative by Beirut DC, an organization that supports independent Arab filmmaking, in partnership with Sawa for Development and Aid, the collective Clown Me In and the Theatre Temoin. The European Union program Drama, Diversity and Development, the Goethe Institute and UNICEF have provided funding.

The idea for “The Caravan” was born from Sabine Choucair's work with Syrian refugees in Lebanon. Choucair, a social therapist, uses storytelling and theater workshops in her work with Syrian refugees of all ages and both genders in need of morale support. According to therapist and educator Johanna Slivinske, storytelling is a “vital component of the assessment and intervention process.”

“At the end of January 2016, I was working with groups of 20 to 25 people doing social therapy,” Choucair told Al-Monitor. “I always started with them telling personal stories. Then I took the ones I felt were important to tell and recorded them in a tent with a sound artist. It took a lot of time, because a lot of people didn't know how to read or write, and we had to record while a lot of people, curious to know what was going on, kept interrupting the recordings. We then edited everything.”

Choucair posted 20 of the 250 stories she recorded online for people around the world to hear. From among the 20, she selected 8 to be performed in a touring play, “The Caravan.”

At the end of April, auditions were held to find actors from among the refugee community in Bar Elias, from where most of the testimonies are taken. Eight teenagers, between the ages of 13 and 20, were chosen to help develop the show. Al-Monitor met with Dergham, Hanan, Ahmed, Sayyed, Ali, Aboudi, Yousuf and Mohammed while they were in the process of identifying visual ways to interpret the stories, under the direction and help of Choucair and her colleague Ailin Conant, from Theatre Temoin, who traveled from London to participate in the creative development of the project.

“We didn't change any of the testimonies,” Choucair explained. “The whole idea is to get the stories out and have people listen to them. We changed just the names, because the refugees were worried even though they trust us. The connection between the actors and the stories is amazing. They really like these testimonies. They feel they're important, and they always have a lot to offer because it relates to their own personal experiences.”

The only girl in the group, Hanan, is 15 years old and arrived three years ago from Homs. Her mother's story is one of the 20 testimonies online.

“Acting is a hobby for me,” Hanan told Al-Monitor. “I saw no girls were coming to the casting, so I decided to represent women. Many girls are opposed to me [doing this]. They ask me why do I go there with all those men, but I always answer it is very important for us to be with men. They are not alien creatures! My mother supports me in this project, and my little brother Dergham joined the cast as well.” Hanan sees involvement in “The Caravan” as a chance to “start acting, be famous and meet many people.”

Among the stories performed by the young Syrian actors, some address personal issues, such as the one from a woman whose father wanted her to study, but she wanted to get married instead, like her cousins. After her wedding, she ended up in her husband's family home with no privacy, before the civil war pushed the family to seek refuge in Lebanon, where she must care for her children in a tent and still has no privacy for herself and her husband. Another story focuses on having nothing but remaining open and generous to others, which, in the play, is brought to life by the actors inviting audience members to join them in their tent.

“The Caravan” will soon be traveling Lebanese roads to spread the Syrian refugees’ messages to different communities, but some issues will inevitably arise and require addressing. For instance, two of the actors might be leaving soon for Sweden. “We will find a plan if it happens,” Choucair reassured Al-Monitor. Other actors are constrained by the Lebanese bureaucracy: They don't have visas and therefore cannot leave the Bekaa Valley. Beirut DC, therefore, organized a casting call in Beirut for Syrian professional actors with legal resident status. They are already rehearsing the play their peers developed in May. After the tour in Bekaa, the second cast will tour the rest of Lebanon, bringing the same solidarity and commitment to the project as the first crew.