The nonprofit organization Clowns Without Borders performed for two weeks to offer moments of laughter and levity. 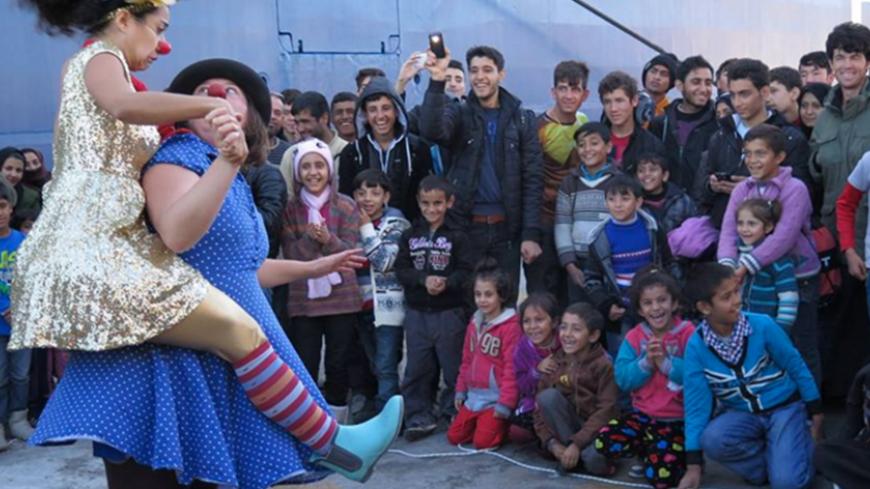 According to the UNHCR, almost 677,000 refugees have arrived on the Greek islands in 2015. One of these islands, Lesbos, is particularly affected, with the vast majority of these refugees landing on rubber boats on the beach. In an effort to bring a bit of laughter and joy to their journey, four clowns came for two weeks, performing every day to the great pleasure of the children.

The group from Clowns Without Borders, an organization founded in Barcelona in 1993, committed to performing six shows a day for between 30 and 1,000 spectators at a time on Lesbos. From the United States, Clay Mazing, Luze Gaxiola and Molly Rose Levine joined Sabine Choucair, a Lebanese clown and art therapist, to bring laughter to refugees during their dangerous journey to Europe. They perform shows in refugee camps, bus stops and beaches, as well as smaller shows in a house.

“In the first place, we had a project with Sabine as an art director to come visit the refugee camps in Lebanon,” Molly Rose Levine, director of Clowns Without Borders and logistician of the project, told Al-Monitor over Skype. “But instead we decided to run the project in Lesbos, because that's where we are the most needed now. In fact, around 80% of the refugees crossing the Mediterranean Sea go through Lesbos on their way to Europe.” To make the project possible, they held a 10-day fundraising campaign that raised more than $5,000 from their supporters in the United States.

What brought the team to Lesbos is the feeling of emergency they got from watching the media. “We saw that everything is happening in Lesbos now, and we felt we needed to come here, they needed to see us,” Choucair explained. “And it is good we came, because everyone seems happy to see us!”

She described the stress and the fear of the people she meets every day: “They go through a horrible journey where they put themselves in danger. They are happy to be in Europe but you can still perceive the heavy burden of emotions they carry.”

The vast majority of the refugees Clowns Without Borders met on the island are from Syria. The others are mostly from Iraq, Afghanistan, Iran, Morocco, Lebanon, Egypt and even Gaza. “I even met two Lebanese families pretending to be Syrians,” Choucair laughed. “But they couldn't fool me!” The team encountered families who lost everything but also single young men trying to find a way to help their families back home. While on Lesbos, they register with the local authorities, who put them, space allowing, into camps according to their nationality and family situations. They stay there between three and 10 days before leaving for Athens by ferry.

For the clowns, this project has been a very moving experience teaching them the importance of their work. “At first, when we perform, a lot of children are scared and stressed. They don't understand where they are or what's happening,” clown and musician Mazing told Al-Monitor. “But when we start the music, make silly faces and play with them, they become children again. It's a very beautiful thing to see. And when parents see their children laughing again, they are happy themselves. After the show, many of them come to thank us. Sometimes they tell us it's the first time they saw their children smile in a week.”

Some argue that what refugees need most is shelter, food and health care, but according to Graxiola, another clown and musician, “They still need to laugh, relax for a moment and allow themselves to spend a 'normal' time just having fun. One of the camps looks like a prison,” she said. “It's run by the police that doesn't have enough resources to deal with that many people. Bringing clowns in this prison-like place is humanizing.”

A lot of stories from these encounters with the refugees can be read on Choucair's Facebook page, where she posts daily updates. For instance, on Nov. 3, there was the story of a child who heard a helicopter passing by and fell to the floor, terrified. That day, the Lebanese clown posted a moving comment: “At that specific moment I couldn't help myself from crying. I went and hugged him, the helicopter left. We continued the show and he smiled again … I hope it will be long before he hears such sounds again.”

Even among the local community and the police, who are frustrated, outnumbered and stressed by the whole situation, the clowns' presence is happily welcome. Mazing said, “I think everybody loves us! For example, we started playing with a police officer, who told us he wasn't a baby anymore. Maybe he was having a bad day! But today, we came back and we started playing again with him, he started laughing and even took pictures with us. We received so much from the police in the camps, and the volunteers helping there for weeks and weeks already. They are happy to relieve the pressure. The local community as well, frustrated from the situation, feels better when they see clowns in their local cafe.”

Meanwhile, Clowns Without Borders has another project that started Nov. 8 in Nepal for the people impacted by the earthquakes, and another starting in Colombia as part of a six-year partnership with local artists in Cali, an area greatly affected by historic violence and poverty. Mazing will continue to follow the refugees until Dec. 2 with his project Emergency Circus, and is still fundraising online to do so.