Will Erdogan and Assad soon meet to bury the hatchet? 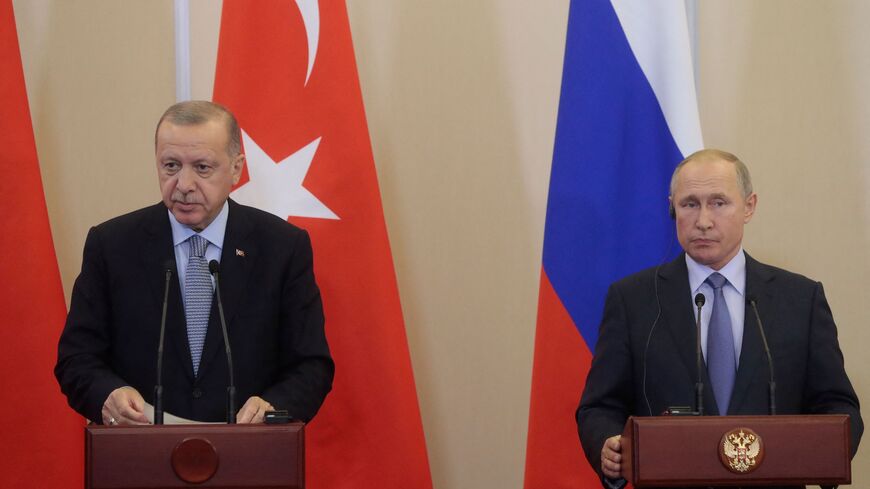 Turkish President Recep Tayyip Erdogan is teasing a meeting with his Syrian counterpart Bashar al-Assad, brokered by Vladimir Putin. The Russian president had been pressing for a Turkish-Russian reconciliation for years, and the endgame seems closer than ever, propelled by Erdogan’s sense of opportunity as a result of the Ukraine war.

Coming together? On Thursday, Erdogan gave the most upbeat assessment yet of the prospects for a reconciliation with Assad: “As Russia-Turkey-Syria, we have launched a process through the meeting of our intelligence chiefs and defense ministers in Moscow. Then, God willing, we will bring our foreign ministers together trilaterally. Then, depending on the developments, we will come together as leaders.”

Syrian opposition on notice: On Friday, Defense Minister Hulusi Akar warned Turkish-backed opposition groups in Syria against "provocations” that could upset a potential rapprochement between Syria and Turkey, while assuring the groups that Ankara would not sell them out, if the process moves ahead, as Ezgi Akin reports. Protests against the possible rapprochement have taken place in Aleppo and Idlib governorates this week, Marita Kassis reports.

Syrian Kurds in Crossfire: Erdogan is, as always, upfront about his top priority in Syria: wiping out the mostly Kurdish Syrian Democratic Forces and their associated local parties, the Democratic Union Party and the People’s Protection Front, as Amberin Zaman explains. Turkey links the groups to the Kurdistan Workers Party (PKK), which it considers a terrorist group. A deal with Assad might preempt a long-threatened invasion to “close the gaps” in the Turkish security belt 30 kilometers (18 miles) deep into Syria. Erdogan said Turkey plans to “destroy the entire infrastructure of the terrorist group it draws its strength from.”

Domestic Politics: Erdogan’s interests in Syria are linked to his domestic political and economic priorities. Turkey is holding elections in June, but the date could be sooner, because of difficult economic circumstances, as Andrew Wilks reports. Turkey hosts close to 4 million Syrian refugees, a strain on the economy. The leading Turkish opposition party, the People’s Democratic Party (HDP), has said it would make peace with Syria. Inflation remains alarmingly high despite a drop in December, as Mustafa Sonmez explains.

Erdogan plays Putin’s weak hand. Putin has long sought to reconcile Assad and Erdogan as a means to stabilize Syria and counter both US and Iranian influence there. The escalation of Russian and Iranian support for Syria in 2015 saved the Assad government from collapse. Putin could point to Syria as a major military and diplomatic success, as many in the region questioned US staying power. Since 2016, Putin has cultivated and prodded the so-called ‘Astana Group’ of Russia, Iran and Turkey to manage their disparate interests in Syria, over time supplanting Western influence and undercutting the UN-mediated political process. But with Putin, and Russia, now bogged down in Ukraine, Erdogan has seized the upper hand as a partner and mediator for Moscow, if a deal comes together.

Israel ‘will not wait’ in Syria. Putin also sought to prevent Syria from becoming an all-out battleground between Iranian forces and proxies in Syria and Israel. Al-Monitor had the scoop from the 2018 Helsinki summit between Putin and US President Donald Trump about the former’s plans to de-escalate Israel-Iran tensions in Syria. That went nowhere then, and is unlikely to go anywhere now. Israel bombed Damascus International Airport on Monday. On Tuesday, Israeli Prime Minister Benjamin Netanyahu said Israel will “take vigorous action to prevent the Iranian military entrenchment in Syria and elsewhere and we will not wait.” On Thursday, the Israel Defense Forces (IDF) tweeted that it will not allow ‘Hezbollah 2.0’ in Syria.

UAE steps into vacuum. On Wednesday, UAE Foreign Minister Abdullah bin Zayed Al-Nahyan made his second visit to Syria since November 2021, a sign of a slow normalization of Damascus’ ties with the Arab world, which the Biden Administration opposes. With Assad seemingly entrenched, and Russia unlikely and unable to balance Iran’s dominant role, Abu Dhabi and other capitals don’t want to cede Syria solely to Iran. Nor do Arab states want to see Syria revert to an even more dire failed or failing state, after more than a decade of civil war and sanctions.

US policy unlikely to change. US policy includes supporting humanitarian access throughout Syria; promoting accountability for the Syrian government’s human rights and nonproliferation violations via sanctions; supporting the UN political process; and preventing the resurgence of Islamic State, which the US characterizes as a ‘low-level’ insurgency. The Pentagon maintains approximately 800 troops in Syria, working with and through the SDF. The US has bombed Iranian-backed militias which regularly undermine the US mission and interests in Syria.

Final Five Takeaways: Can the US's Syria policy keep up with events?

1. The US considers the D-ISIS strategy in Syria a success, and is unlikely withdraw its forces, at least for now. The deployment has been a low-cost, high-yield investment for leverage in an uncertain environment. The US and SDF administer areas which include oil fields and other key resources. The Syrian Kurds by now understand the limits of the US commitment.

2. Some members of Congress will call on the US to implement more sanctions under the CAESAR Act, as Elizabeth Hagedorn reports. The sanctions do little to undermine Assad and compound the humanitarian and economic crises which put Syria at further risk of state collapse, however.

3. The US has other priorities, including Russia and Ukraine, pushing Syria even further to the back burner. Both Moscow and Tehran should feel vindicated by Assad’s staying power, but they are distracted by the Ukraine war and, in the case of Iran, four months of protests. The US on Friday sanctioned Iranian drone suppliers for supplying Russia in Ukraine. Erdogan and Assad are the beneficiaries here.

4. Turkey-Syria reconciliation is not a done deal, and there remains a risk of military conflict via a Turkish military incursion in the north, or a Syrian attack on rebel-held Idlib. The confluence of countries with military assets and proxies in Syria — the US, Russia, Iran, Turkey, Israel – suggest that the situation can escalate at any time, or evolve as a low-grade regional conflict.