The Takeaway: Regional embrace of Syria's Assad puts US in tight spot

Plus, the US responds to Itamar Ben-Gvir's controversial holy site visit, and President Joe Biden names ambassadors to Jordan and Oman. 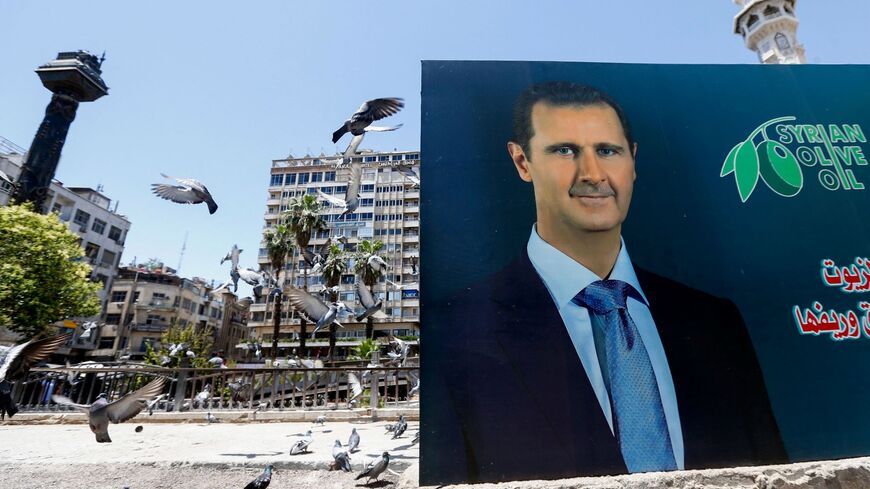 Pigeons fly next to an election campaign billboard depicting Syrian President Bashar al-Assad, a candidate for the presidential vote, in the capital Damascus, on May 25, 2021. - LOUAI BESHARA/AFP via Getty Image

The Biden administration has issued another warning to Syria’s neighbors against boosting ties with President Bashar al-Assad, but critics say the administration could be doing more to prevent Damascus’ return to the Arab fold.

On Wednesday, Emirati Foreign Minister Abdullah bin Zayed met with Assad in the Syrian capital for the second time since November 2021. Their latest meeting follows Assad’s March 2022 visit to the United Arab Emirates — his first to an Arab country since the Syrian revolution erupted in 2011.

In a further sign of the region’s warming to Assad, the defense chiefs of Turkey and Syria held talks in Moscow last week. As Nazlan Ertan writes, their first official engagement in more than a decade came on the heels of several Turkish overtures to Damascus in the second half of 2022, including Turkish President Recep Tayyip Erdogan himself raising the possibility of an Assad meeting.

"We urge states to carefully consider the Assad regime's atrocious human rights record of the past 12 years as it continues to inflict atrocities on the Syrian people and to deny access to life-saving humanitarian aid," Price said.

The Biden administration has repeatedly said it has no plans to “normalize or upgrade” its severed relations with the Syrian government, nor does it support regional states doing so. Lawmakers on both sides of the aisle have urged Biden to keep the pressure on Syria’s neighbors through the so-called Caesar Act.

The bipartisan legislation that took effect in 2020 authorizes broad penalties against anyone — Syrian or foreign — who provides support for the regime’s military operations or knowingly does business with the government, specifically in the construction, engineering, aviation and energy sectors. The Trump administration issued several rounds of sanctions under this authority, but since coming into office, the Biden administration has yet to issue Caesar-specific sanctions on Assad’s benefactors.

“The Biden administration refuses to target economically significant figures,” said David Adesnik, director of research at the Foundation for Defense of Democracies. “The administration has sanctioned military and intelligence officers guilty of terrible crimes, but never those who finance the regime.”

This year, members of the GOP-controlled House are likely to push for greater use and strengthening of Syria sanctions, a senior Republican congressional staffer told Al-Monitor.

“Generally, Republicans are deeply frustrated that there has been almost no Caesar sanctions enforcement under Biden,” the staffer said.

There’s also Democratic interest in stepping up sanctions on Syria. A January 2022 letter signed by the top Democrats and Republicans on Congress’ foreign affairs panels urged Biden to make better use of the Caesar Act and “consider consequences” for countries who seek to rehabilitate Assad.

As the region’s diplomatic outreach to Damascus continues, the Biden administration is in “a very tricky place with very few cards to play,” short of threatening sanctions against US allies and partners, says Charles Lister, a Syria expert at the Middle East Institute.

Biden has so far approached the ruinous civil war in Syria as a crisis to be contained, says Lister, but “it is not enough to have a status quo policy when the many actors around us are all moving and seeking to change the dynamic.”

The visit by Israel’s far-right national security minister, Itamar Ben-Gvir, to Jerusalem’s most contested holy site on Tuesday could further ratchet up tensions between Israel and the Palestinians, the State Department warned Tuesday.

“This visit has the potential to exacerbate tensions and to provoke violence,” department spokesperson Ned Price told reporters, without mentioning Ben-Gvir by name.

Price sidestepped questions Tuesday over whether Ben-Gvir’s appearance at the site, known to Muslims as Haram al-Sharif and Jews as the Temple Mount, violated the historic status quo. Israeli Prime Minister Benjamin Netanyahu has said his new right-wing government will not seek changes to the rules governing access to Jerusalem’s holy sites.

“We expect him to follow through on that commitment,” Price said.

President Joe Biden announced a crop of new ambassador nominees, including Yael Lempert, currently the principal deputy assistant secretary for the State Department's Bureau of Near Eastern Affairs, as US ambassador to Jordan. Ana Escrogima, who serves as consul general of the US Consulate General in Montreal, Canada, is Biden’s choice for US ambassador to Oman.

Biden announced he will renominate those who were not confirmed in the last Congress, including Michael Ratney as ambassador to Saudi Arabia. His nomination has been held up by Sen. Ron Wyden (D-Ore.), who is seeking information from the Biden administration on how Riyadh helps its citizens accused of violent crimes flee the United States. Wyden's office said his conversations with the administration on this issue are ongoing.

Also renominated were Karen Sasahara and Martina Strong as ambassadors to Kuwait and the United Arab Emirates, respectively.

• Francisco Serrano writes in Al-Monitor PRO that Algeria’s energy sector is maybe too reliant on high energy prices for its 2023 ambitions.

• As the Pentagon shifts focus to China and Russia, CENTCOM’s chief is banking on experimentation with unmanned surveillance and artificial intelligence, reports Jared Szuba.

• Amberin Zaman explains why Turkey’s recent overtures to Assad are rooted in a desire to crush the Syrian Kurds’ autonomy.

• In an interview with Andrew Parasiliti, Omani Minister of Energy and Minerals Salim Al Aufi argues that Oman can sustain its economic progress despite the possible impact of a global economic recession on oil prices.